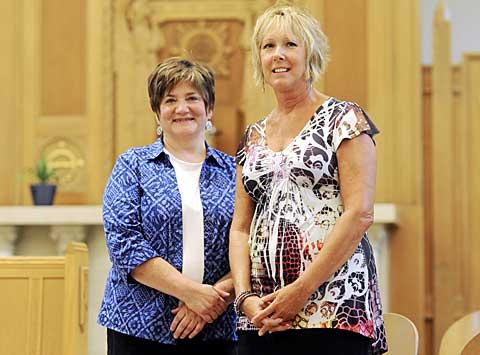 "When youth ministry and faith formation are done well, no one should be able to tell them apart."

Sue Versluys and Linda Mehlenbacher both firmly agree on the validity of that quote from Robert McCarty, executive director of the National Federation for Catholic Youth Ministry. The two women expected their agreement on this philosophy would help ease Versluys’ transition from youth ministry into faith formation and Mehlenbacher’s transition from faith formation to youth ministry.

Versluys left her post as diocesan coordinator of youth ministry June 25 and will become director of faith formation at St. Pius Tenth Parish in Chili on Aug. 16. Mehlenbacher, meanwhile, left her position as director of faith formation at Our Mother of Sorrows Parish in Greece and took over Versluys’ former youth-ministry position in the diocesan Department of Evangelization and Catechesis on June 28.

Versluys has been a fixture in youth ministry in the diocese for nearly three decades. Her first foray into youth ministry was in 1981, when she became a volunteer youth minister in her home parish, St. John the Evangelist in Spencerport. That became a paid position in the early 1990s, and the parish’s youth-ministry program flourished under her leadership.

One of her first projects was the development of a leadership program for teens, a project sparked by a meeting with a member of one of her first youth groups. That man told Versluys that he vividly recalled a youth-group meeting during which Versluys and her husband, Rich, urged teens to look into people’s eyes when shaking their hands, because the eyes are the windows to a person’s soul.

"Twenty years ago we taught a life lesson with some spiritual significance and this kid remembered it and now he’s 40 years old and he thinks about Rich every day when he shakes hands with people," Versluys marvelled.

Versluys was inspired to find a way to share more of those lessons with young people, and to prepare them to take active leadership roles in their parishes and communities.

The resulting five-day program, Foundations for Catholic Youth Leadership, is held each year and will continue to be part of diocesan programming, Mehlenbacher said.

Versluys said she especially enjoyed coordinating diocesan participation in the National Catholic Youth Conference and forming bonds with teens and youth ministers. After nearly 10 years at her diocesan post, however, Versluys recently decided it was time to return to her roots in parish ministry.

"I really miss parish work," she said. "That’s where I came from, and as I’m getting older and becoming a grandmother the whole idea of faith formation for the young ones is really attractive."

Versluys is comfortable leaving her former position in the hands of Mehlenbacher, who also originally became involved in youth ministry on a volunteer basis.

"I went to the first Junior High Youth Rally ever at Keuka College," Mehlenbacher recalled. "The parish asked me to go as a chaperone and it was like someone had thrown the hook out and I was in. That was it."

Mehlenbacher became a volunteer youth minister in the Southern Tier in 1999 and eventually became a staff member at Holy Family Catholic Community, which comprises St. Joseph in Wayland, St. Mary in Dansville, Sacred Heart in Perkinsville and St. Pius V in Cohocton. She eventually became the parish’s coordinator of both youth ministry and faith formation, and left there in 2008 to become faith-formation coordinator at Our Mother of Sorrows. Mehlenbacher said she’s found her calling in working with young people.

Along the way Mehlenbacher became passionate about family ministry and hopes to incorporate elements of family ministry into diocesan youth-ministry programming. She’s also excited about rolling out a new adolescent-catechesis curriculum in cooperation with other members of the Department of Evangelization and Catechesis. In the meantime, she’s been attending listening sessions throughout the diocese to meet and interact with youth ministers.

"When we get through that then we’re really going to go out and do some more brainstorming," Mehlenbacher said. "I’m holding off making any concrete changes or plans until I see the whole picture and really see what they have to say."