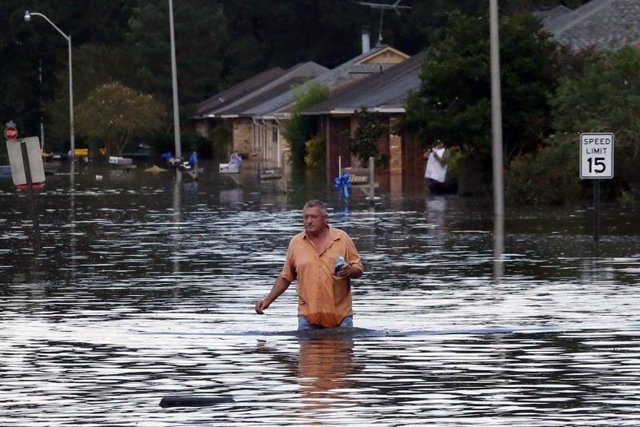 A man wades through a flooded street in Ascension Parish, La., Aug. 15. The Diocese of Baton Rouge, La., has been helping flood victims deal with the stress of "letting go" and adjusting to a "new normal" so they can recover materially, mentally, spiritually and emotionally.
By Debbie Shelley
Catholic News Service
BATON ROUGE, La. (CNS) — Goodbye house, car and treasured items that evoke favorite memories. Gone also for some people are their sense of safety, security and peace after August floodwaters took away much of what was familiar and dear to them in southwest Louisiana.
The Diocese of Baton Rouge has been helping flood victims deal with the stress of "letting go" and adjusting to a "new normal" so they can recover materially, mentally, spiritually and emotionally.
That was the focus of a recent program titled "From Flooding to Flourishing: Turning Trauma into Growth" at St. Alphonsus Church in Greenwell Springs, sponsored by the diocese’s Office of Marriage and Family Life and its Catholic Charities agency.
After a prayer led by Father Michael Moroney, the pastor, audience members laughed and smiled as Paula Davis, of Catholic Charities, asked them to think of the title of the movie, song, book or TV show that best describes their flood experience.
Davis said a couple of misconceptions concerning surviving trauma is that it leaves people broken and damaged with post-traumatic stress disorder and that they are unable to return back to "normal."
What is true is that only 8 percent of people will develop PTSD. After a brief period of struggle, most people change their lives for the better, stated Davis.
She said most people develop post-traumatic symptoms immediately after the event: nightmares and trouble sleeping; intrusive recurring images of the traumatic event; feeling on edge or jumpy; consistently fearful; feeling numb; worry and sadness.
The impact can be particularly felt by children, who are taking their cues from their parents. They may have trouble sleeping or problems at school.
Darryl Ducote, director of the Office of Marriage and Family Life, contrasted PTSD to post-traumatic growth.
Ducote said, "Just because you are experiencing some of the symptoms doesn’t mean you’re heading toward post-traumatic disorder."
He pointed out that trauma leads to change. There is no "going back to the way things were," he explained, calling it a transformative situation.
People stuck in a negative reaction to the trauma develop PTSD. With a positive change, or post-traumatic growth, a person adapts to a traumatic experience by making positive changes, he indicated, resulting in increased inner-strength; openness to new possibilities in life; closer and deeper relationships; enhanced appreciation for life; and a strong sense of spirituality.
"You may realize you have strengths you didn’t know you had," said Ducote.
Stephanie Sterling, also from Catholic Charities of the Diocese of Baton Rouge, presented the tools for post-traumatic growth. People must recognize they cannot have their old life back but may begin a path to a different life. This leads to creating a "new story" of who they are, what they expect out of life and how to achieve this new vision.
Trauma shatters the benevolent worldview that "those things could never happen to me," said Sterling. Developing a different view is at the heart of post-traumatic growth, she said. Trauma pushes one to develop a new understanding of self and a new set of goals.
Writing a "new story" requires deliberately reflecting on how the trauma has impacted them, recognizing their personal strengths and seeing how they can go forward by meeting challenges.
Other growth tools include: relying on, and being grateful for, the support of family and friends and others; expressing thoughts and emotions; looking for the positive; and caring for oneself.
Another recovery key is faith, which puts the struggle into a larger context through the paschal mystery, the speakers said.
"Consider Jesus in the garden," said Ducote. "That’s a crucial moment when he was struggling with the paschal mystery. God rewarded that experience. God raised him from the dead."
Likewise, by releasing what they need to let go of, people can find "more than they ever could have imagined," added Ducote.
Attendees said they benefited from the program.
"We are coming out of it differently, but we are processing it and moving forward," said St. Alphonsus parishioner Cindy Hughes, who was there with her husband, Joe.
Joe Hughes told The Catholic Commentator, Baton Rouge’s diocesan newspaper, that the presentation taught him to "give everything to God. God’s shoulders are bigger than mine."
St. Alphonsus parishioner Vance Thomas said he learned about the importance of resting, recreation, relaxation and eating right.
"We’ve been pushing ourselves hard — working late nights," said Thomas. He and his wife have been raising two grandchildren.
– – –
Shelley is assistant editor of The Catholic Commentator, newspaper of the Diocese of Baton Rouge.
Copyright © 2022 Catholic News Service, Inc. All rights reserved. Linking is encouraged, but republishing or redistributing, including by framing or similar means, without the publisher's prior written permission is prohibited.