Diocese is home to orders of men - Catholic Courier 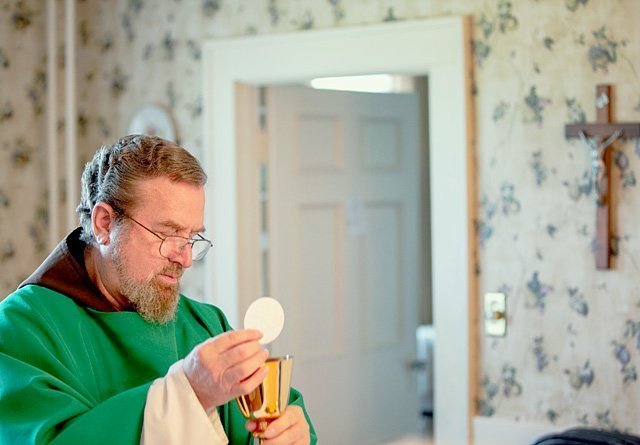 EDITOR’S NOTE: Inspired by Pope Francis’ declaration of the Year of Consecrated Life, this is the tenth and final installment in a series on religious communities in the Diocese of Rochester.

The Diocese of Rochester is home to several communities of men from various religious orders.

Missionaries of the Most Precious Blood

The Missionaries of the Most Precious Blood were founded to preach parish missions and retreats, but its missionaries have served local Catholics in a variety of ways, according to Father John Colacino, CPPS.

The order was founded in 1786 by St. Gaspar del Bufalo. The first Missionaries of the Most Precious Blood arrived in America in the first half of the 19th century, and served in Rochester’s Most Precious Blood Parish from 1930 until the mid-1980s, according to a brief history of the order’s Atlantic Province, to which Father Colacino belongs. The church closed in 2008.

The missionaries also temporarily served at St. Anthony Parish in Rochester and St. Jerome Parish in East Rochester. Twenty years ago the missionaries established a mission house on Highland Avenue in Rochester, and the house is a place of welcome and hospitality for people on the margins of society, said Father Colacino, who is a professor of religious studies at St. John Fisher College in Pittsford. He said he believes his vocation as a Missionary of the Most Precious Blood calls him to minister to those who are on the margins of society.

"In the New Testament, St. Paul speaks about those who are far off being brought in by the blood of Christ. The letter to the Hebrews speaks of (how) Jesus shed his blood outside the camp, so I feel a particular calling to people who are on the margins, especially on the margins of the church," said Father Colacino, who currently is the only Missionary of the Most Precious Blood within the 12 counties of the Diocese of Rochester.

The first Carmelite Fathers were hermits on Mount Carmel in Palestine in the 12th century, according to Father John Healy, OCarm, prior of Rochester’s community of three Carmelite Fathers. After the Crusades ended the Carmelite hermits began moving into European cities, and in the 1870s and 1880s Carmelites began arriving in America. They have been serving in the Diocese of Rochester since at least the early 1940s, when they opened the Carmelite House of Studies in Auburn, Father Healy said.

Several years later the Carmelites founded Mount Carmel High School in Auburn at the request of Bishop James E. Kearney, and at one time the school was staffed by 18 priests and brothers. After the high school closed in 1970 several of the priests began teaching at other schools, including Bishop Kearney High School, Nazareth Academy and McQuaid Jesuit High School, where Father Healy served for 33 years.

"Our charism is really to promote prayer and contemplation," he remarked.

In 1951 the Capuchin Franciscans of the Province of St. Mary purchased a large home on the picturesque western shores of Cayuga Lake, and the home became St. Fidelis Friary. Capuchin Franciscan friars have resided in the friary ever since. The century-old building currently is home to four friars, according to Father Bernard Maloney, OFM Cap, who is both superior of the local Capuchin Franciscan community and pastor of St. Francis Solanus Parish in Interlaken, Holy Cross Parish in Ovid and St. James the Apostle Parish in Trumansburg.

Father Maloney resides at the friary with two retired friars — Father Eugene O’Hara and Brother Antonine Lizama — and Father Brendan Buckley, who serves as parochial vicar at the Interlaken, Ovid and Trumansburg parishes and also is involved with Hispanic ministry in the Rochester Diocese. In previous years, Capuchin Franciscans have ministered in hospitals and given retreats at parishes within the diocese, he said.

A branch of the Franciscan Order originally founded by St. Francis of Assisi in 1209, Capuchin Franciscans are dedicated to fraternity, minority or poverty, contemplation, ministry and justice, peace, and ecology, Father Maloney said.

"We are a prayerful community," he added.

Anyone who has ever attended a retreat at Notre Dame Retreat House in Canandaigua has probably met a Redemptorist priest. The retreat house provides a perfect avenue for those priests to live out their mission of spreading the Gospel and ministering to the spiritual needs of the faithful, according to information provided on the retreat house’s website.

St. Alphonsus Liguori founded the Congregation of the Most Holy Redeemer in 1732 in Naples, Italy. The priests of this order, known as Redemptorists, preached the word of God in Italy’s rural and isolated communities before branching out to serve in Poland, Germany, Belgium and Holland. They took up their first missionary work outside of Europe in 1832, when they came to America at the request of six American bishops, and Rochester was one of the first places they settled upon their arrival.

They began giving an annual retreat at St. Bernard Seminary in Rochester in 1921, and in 1926 opened a retreat house in Geneva on the shores of Seneca Lake, according to www.ndretreat.org. They offered retreats at that property until 1956, when they opened a new retreat house in Rochester, which they used for 12 years. In 1967 the Redemptorists opened the current Notre Dame Retreat House, which overlooks Canandaigua Lake.

The retreat house currently is home to Redemptorist Fathers Francis Jones and Paul Miller and offers retreats for parishes, couples and individuals throughout the year.