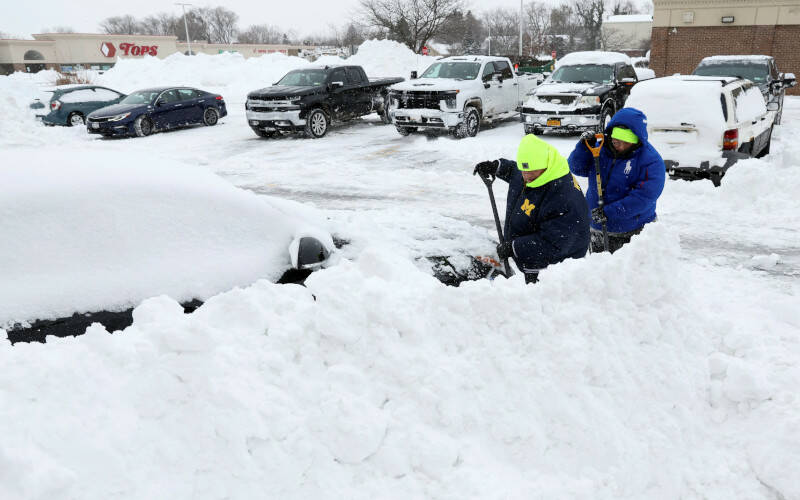 People work to dig out a car in Amherst, N.Y., Dec. 26, 2022, during a deadly winter storm that hit the Buffalo region. (CNS photo by Brendan McDermid/Reuters)

Father Paul Seil experienced a Christmas unlike any other in his 67 years of life in Buffalo.

In the midst of the multiday blizzard that paralyzed parts of western New York, Father Seil, chaplain for the Buffalo Fire Department, had to evacuate the rectory at his parish in the city’s Old First Ward neighborhood on Christmas Eve, then spent the night aboard the department’s fire boat and celebrated a short Mass Christmas morning for crewman Jack Kelleher.

Finally the afternoon of Christmas Day Father Seil made it to the rectory at St. Joseph Cathedral — courtesy of Kelleher — where he has been “holed up” since.

“This is the worst storm I’ve ever seen,” Father Seil, a native of Buffalo, told Catholic News Service Dec. 27.

The blizzard and subzero temperatures prompted Buffalo Bishop Michael W. Fisher to urge Catholics living in the worst affected communities to avoid venturing to their parishes for Christmas Masses and to take advantage of livestreamed liturgies instead.

“Do not attempt to attend Masses in person,” Bishop Fisher warned Dec. 24.

Through Dec. 27, at least 31 people in Erie County had died during the storm, said county executive Mark Poloncarz. Over the course four days, the storm dumped 4 feet of snow in Buffalo and surrounding communities.

Nationwide, more than 50 people died because of the storm, which affected tens of millions of Americans and Canadians beginning Dec. 21 and lasting for five days.

Priest had no heat, burst pipe at Our Lady of Perpetual Help’s rectory

Father Seil’s Christmas adventure began after the electricity went out the evening of Dec. 23 in much of the neighborhood around Our Lady of Perpetual Help Parish, which has served the community for 125 years.

He said he went to sleep that night bundled in warm clothing and woke up the next morning to a “pretty cold room.”

Relocating to the kitchen, Father Seil periodically used the stove for a little heat, making sure the carbon monoxide detector he had worked. That situation lasted just a few hours.

“I heard a sound of rushing water. The pipes broke evidently and water came pouring down through the kitchen ceiling and extinguished the stove,” he said.

“With water coming in and no heat, it was getting a little desperate. I was scared. I was a little afraid of what the future might bring,” he said.

Soon, Father Seil put out a call for help on the fire radio he carries as fire department chaplain, a ministry he began in 2018. But the department couldn’t respond. Fire trucks and emergency vehicles answering emergency calls were getting stuck in snowdrifts up to 6 feet high.

“There was nothing for me to do,” Father Seil said.

That’s when Kelleher responded with an offer to help.

The marine engineer aboard the fire boat, named the Edward M. Cotter, said he could try to make it the mile from the boat’s mooring along the Buffalo River to Our Lady of Perpetual Help.

Five blocks from the church, tall drifts blocked Kelleher’s SUV. He radioed Father Seil asking if he could trudge to him instead.

Quickly packing a few overnight necessities and Communion wafers and dressing in his fire turnout gear, Father Seil tried walking through the deep snow and gale-force winds. He quickly realized, however, that the storm’s intensity was too much.

That’s when a couple of neighborhood residents who were checking on people in their homes offered to help, followed by a man in snowmobile who had made his way from an outlying area to evacuate people to safety. Father Seil called him a godsend, a Christmas gift.

“I got on the back, strapped in my bags. In a few moments we were at Kelleher’s Chevy Blazer,” Father Seil said.

The fireboat was operating on a generator, which provided heat and electricity. “It was nice. It was warm,” Father Seil said.

Also in Father Seil’s bag was a couple of pounds of smoked kielbasa sausage and a few rolls. Christmas Eve dinner on the Cotter was a feast for the two men.

The next morning, Father Seil celebrated a brief Mass for Christmas, Kelleher then offered to take him to “your boss’s house,” meaning St. Joseph Cathedral. It’s where Father Seil has been since.

The priest, whose father was a firefighter in Buffalo until a serious accident while fighting a fire disabled him in 1964, was hoping to return to his parish as soon as possible. He was waiting for the all-clear from city officials that travel was safe again.

Bishop wanted his parishioners to remain safe during the blizzard

The city of Buffalo remained under a travel ban at midday Dec. 27 as snow removal crew gradually cleared streets, many of which were blocked by vehicles that had become mired in deep snow.

“Unfortunately, it was too dangerous to ask people to even try to get here to the cathedral or any of our parishes,” he told CNS Dec. 27.

Most parishes in the immediate Buffalo vicinity canceled Masses, while many livestreamed liturgies for people stuck at home or in shelters. In some locales where streets were not clogged with snow, Masses went ahead as scheduled.

Bishop Fisher credited Catholic Charities of Buffalo for rushing to ensure food and supplies were distributed to people in need before the storm arrived.

“We felt confident people had food who needed it,” he said.

Two days after Christmas, many parishes remained closed, with pastors “hunkered down in their rectories,” Bishop Fisher said.

A special Mass was planned for Dec. 28 at St. Joseph Cathedral for Buffalo-area residents who died during the storm. Another liturgy was set for the weekend for first responders and other essential workers who continued to serve residents most affected by the wild winter weather.

“We’re trying to take care of one another,” the bishop said.

“This time of the year, as we’re celebrating Christmas, it’s supposed to be a time of hope,” he added. “The people here in Buffalo, I’ve found, they’re tough and hearty and resilient and very faith-filled. I know they’re caring for one another and we’re trying to do what we can as part of the community.”

Tags: NY Catholics
Copyright © 2023 Catholic News Service, Inc. All rights reserved. Linking is encouraged, but republishing or redistributing, including by framing or similar means, without the publisher's prior written permission is prohibited.