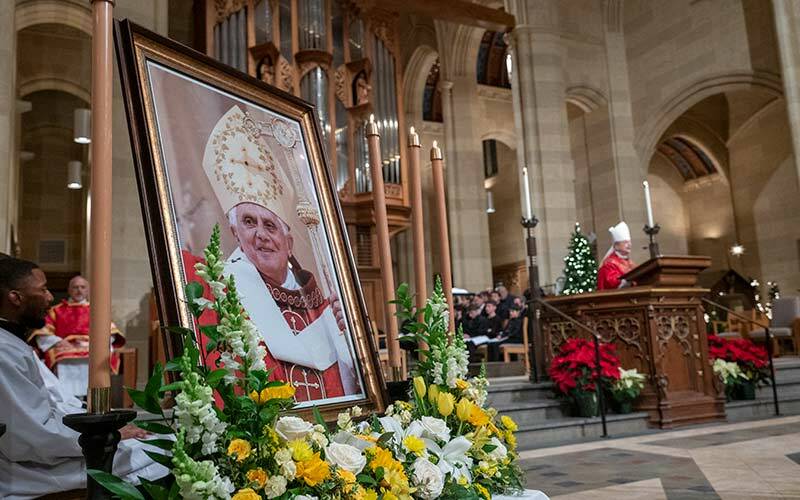 Bishop Salvatore R. Matano gives the homily near a photo of the late Pope Emeritus Benedict XVI at the start of the Jan. 4 Mass at Rochester’s Sacred Heart Cathedral. (Courier photo by Jeff Witherow)

Bishop Matano shared the story with the pontiff when he was in Rome with all newly ordained bishops in September 2005.

“It’s a moment that I’ll never forget,” Bishop Matano said to members of the media before Mass. “He seemed so generously pleased that we would share this same date, and I have always held dear to my heart that memory.”

Bishop Matano again shared the story with the congregation gathered for a Solemn Memorial Mass for the Repose of the Soul of Pope Benedict XVI at Sacred Heart Cathedral Jan. 4. Pope Emeritus Benedict XVI died Dec. 31, 2022, at the age of 95. Pope Francis celebrated his funeral Mass Jan. 5 in St. Peter’s Square in Rome.

During his homily at Sacred Heart Cathedral Jan 4, Bishop Matano said Pope Benedict XVI beautifully and authentically fulfilled his petrine office as the successor to St. Peter and the vicar of Christ on earth. He noted that many commentaries on the life of Pope Benedict also note that he was a defender of church doctrine.

“For Benedict, doctrine is Jesus, living and breathing and teaching and guiding in the midst of his people, seeking to know, love and serve him,” Bishop Matano said. “Some look for Jesus too high up, others look for Jesus too far away, Benedict looked neither too high nor too far, he looked into his own heart. He taught with the heart of Christ.”

The bishop noted that Pope Benedict rightly has been called an outstanding scholar by students of theology and often has been referred to as the “theologican pope.” He cited Pope Benedict XVI’s encyclicals, Deus Caritas Est (“God is Love”), Spe Salvi (“In Hope We Were Saved”) and Caritas in Veritate (“Charity in Truth”).

Bishop Matano also recognized Pope Benedict XVI as a humble man, both in renewing his sorrow and “heartfelt request for forgiveness” to victims of clergy sex abuse and showing his humility then again on Feb. 28, 2013, when he humbly acknowledged that his age and health did not permit him to fulfill the duties of his office as he would wish.

“The profound humility that shown forth in the (resignation) announcement of Pope Benedict XVI made him even stronger and more powerful by his personal act of faith. He carved out in our hearts a place and there shall he ever remain,” he said.

Bishop Matano noted that during Emeritus Pope Benedict’s life of solitude in these last few years, he continued to pray for us and for his successor, Pope Francis. At the time of his resignation, Pope Benedict promised to continually and devotedly serve the holy church of God through a life dedicated to prayer, the bishop noted.

Concluding his homily, Bishop Matano said that the Diocese of Rochester — in union with Pope Francis and the universal church — gives thanks God for the life of Pope Benedict XVI and for his desire to serve Christ in charity and faith.

“Begging the intercession of our Mother Mary, we commend the soul of Benedict XVI to the mercy of God. May his soul rest in peace.”

Jean Baric-Parker and Gretchen Gillaspy were among the many faithful filling Sacred Heart Cathedral for the local Mass for Pope Benedict XVI. While neither had a personal connection to the pontiff, both told the Catholic Courier that they enjoyed Pope Benedict’s writings.

“Pope Benedict XVI seemed to express himself in a way that an average Catholic could understand,” remarked Baric-Parker, who is a professor at St. Bernard’s School of Theology and Ministry in Pittsford. “I think a lot of people enjoyed that. I respected him as a devout and good, solid pope. I respected his decision to resign, even though it was hard to understand it. His years in prayer could very well be what the church needed.”

“Pope Benedict could take a really complicated concept and make it straightforward and clear,” added Gillapsy, who attends Rochester’s Our Lady of Victory Church. “I’m hoping that the pope is praying for us.”

Father Peter Van Lieshout, rector of Sacred Heart Cathedral, was a seminarian at the Pontifical North American College in Rome during the pontificate of Benedict XVI. His only close encounter with the pontiff came in 2009 when Pope Benedict XVI greeted students from the balcony overlooking St. Peter’s Square on the seminary’s 150th anniversary.

“He was so gentle. It was that personality that I felt in Rome, and that when he was gone, you felt the absence of that,” he said.

Tags: Pope Benedict XVI
Copyright © 2023 Rochester Catholic Press Association, Inc. All rights reserved. Linking is encouraged, but republishing or redistributing, including by framing or similar means, without the publisher's prior written permission is prohibited.