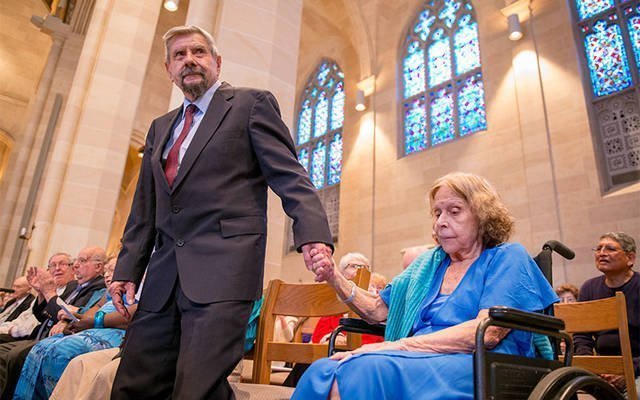 During the annual Wedding Jubilee Mass at Rochester’s Sacred Heart Cathedral May 6, Bob and Dee Crowell are recognized for their 69 years of marriage. (Courier photo by Jeff Witherow) 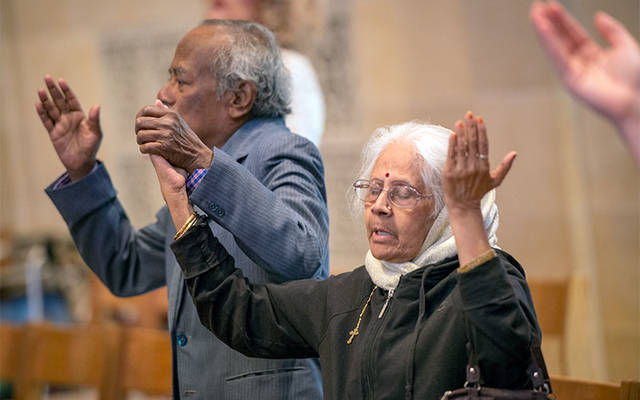 Isabella and Thiagaraj Nevis, who are celebrating 50 years of marriage, stand during the liturgy. (Courier photo by Jeff Witherow)

ROCHESTER — More than 100 married couples — more than a few with young children in tow — renewed their wedding vows May 6 at Sacred Heart Cathedral during the Diocese of Rochester’s annual Wedding Jubilee Mass.

“Today we honor and pray for you, who have made Jesus a true and intimate part of your marriage. We pray the Lord will continue to bless and to sustain your married life,” Bishop Salvatore R. Matano told the couples gathered in the cathedral, moments before he asked them to stand and renew their vows to each other. “The church renews its profound esteem and its support for your vocations, lived in love, lived in fidelity and lived in Christ, and we pray that the days and the years to follow will indeed by blessed by the joy of the risen Lord.”

Love is the foundation for all that happens in marriage, and the love between spouses mirrors the love Christ has for his church, Bishop Matano explained.

“From that love of the spouses in union with the creator, the church gives birth to the domestic church, the family. In honoring couples today, we then honor the family,” Bishop Matano said.

Many family members were on hand to witness their loved ones renewing their vows later in the liturgy. Nellie and Ed Varel, for example, repeated their vows while standing next to their son and daughter-in-law, Ed and Amy Varel. The younger couple also exchanged vows while their three daughters looked on. The elder Varels, who will be celebrating their 50th wedding anniversary in September, said they were grateful for the opportunity to share such a special experience with the younger couple, who are celebrating 16 years of marriage this year.

“It was great, just to know that their marriage is enduring and we gave them a good example,” the elder Ed Varel said.

“It was an opportunity I just couldn’t pass by,” Nellie Varel added.

Caitlin and Steve Mariconti also brought their three children to the Mass. Caitlin Mariconti was serving as cantor at the Mass, but was able to slip out of the sanctuary long enough to stand with her husband as they renewed their vows. Holding each other’s hands and repeating those familiar words brought back cherished memories of their own wedding day nine years ago, said the couple, who belong to St. Kateri Tekakwitha Parish in Irondequoit.

Sharing this moment in the presence of their three sons, ages 1, 4 and 6, made it even more special, added Caitlin Mariconti, who held her youngest son in her arms as she repeated her vows.

“He was fussing, but it sort of felt right to be here, nine years later, with our three kids,” she remarked.

The Maricontis’ older children were impressed by the longevity of many of the marriages represented around them, Steve Mariconti added.

“They were commenting about it. They said, ‘Wow, they’ve been married 60 years!’” he said.

Josephine and Anthony Matroniano, who also belong to St. Kateri Parish, will have been married 71 years this July and were recognized as the longest-married couple at the Mass. They, along with a couple who has been married 69 years, received a bouquet of flowers and personal congratulations from Bishop Matano. The Matronianos said they are grateful for their enduring and fruitful marriage, which has produced two children, five grandchildren and two great-grandchildren.

Although their marriage has stood the test of time, the Matronianos are reluctant to offer words of advice to other couples.

“Everyone always asks us (for advice). We just got along,” Josephine Matroniano explained simply.

Tom and Elisa Richardson, meanwhile, can pinpoint one of the sources of their marital success.

“Communication is the key, it really is,” opined Tom Richardson.

The priest who celebrated the Richardsons’ wedding 26 years ago told them to always be considerate of each other, and the spouses have kept that in mind throughout the years. The Richardsons, who belong to Fairport’s Church of the Assumption, also have been active in Worldwide Marriage Encounter and attended the Mass with a number of their friends from the program.

Sharon and Bill Swartz also have been heavily involved in church activities over the years. The couple belongs to the Cathedral Community and spent most of the Mass in the narthex, where they set up and later manned one of the refreshment tables. They did take a break long enough to renew their vows, however.

“We snuck in real quick,” Sharon Swartz said, noting that she and her husband of 54 years have renewed their vows several times in the past. “It’s always such a joyous feeling.”

The Swartzes, who have five children, 10 grandchildren and one great-grandchild, said they frequently volunteer as a team.

“It’s part of our vows, to work through life together,” Sharon Swartz explained. “No matter what we do, we are a part of each other.”