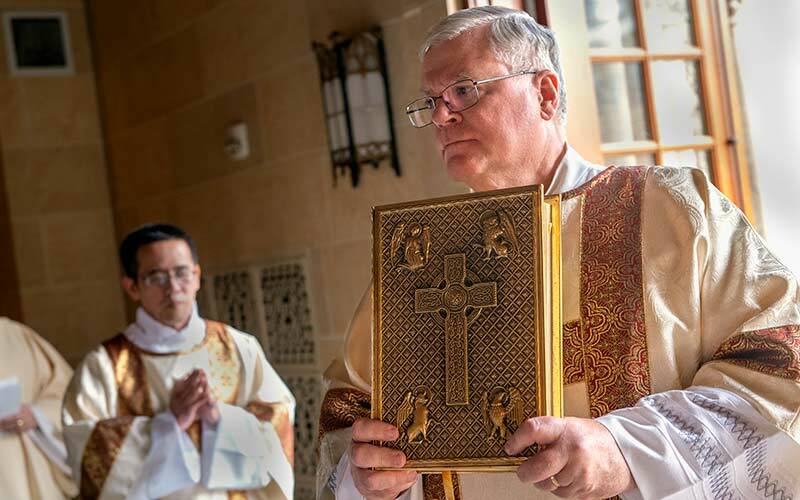 Deacon Edward Giblin, director of the diocesan Office of the Permanent Diaconate, processes into Rochester’s Sacred Heart Cathedral at the start of the April 12 Chrism Mass. (Courier photo by Jeff Witherow)

“Is it something I should pursue?”

When Daniel Kinsky and George Welch were asking these questions more than 40 years ago — following restoration of the permanent diaconate by the Second Vatican Council — there was no one with direct experience to whom they could turn for counsel.

That’s because they and 22 other men were becoming ministerial pioneers. On April 17, 1982, Bishop Matthew H. Clark ordained them as the first class of permanent deacons in diocesan history.

Over their four decades of ministry, Deacons Kinsky and Welch said that they’ve made a concerted effort to connect with potential deacons, lending wisdom from their many years of service.

Deacon Welch said he’s grabbed meals or cups of coffee with many men who were interested in learning more about the diaconate. He said he strives to act as a guide rather than an authority about whether individuals should actually pursue formation.

“I really believe a vocation is a call from God. What I can offer is a listening ear and my experiences of service,” said Deacon Welch, who serves at Parish of the Most Holy Name of Jesus in Elmira.

“I’ve approached a number of people and asked, ‘Have you ever thought about (becoming a deacon)?” added Deacon Kinsky, who ministers at St. John of Rochester Parish in Fairport.

Deacon Edward Giblin, director of the permanent diaconate for the Diocese of Rochester, noted that a pastoral leader should be the first contact for inquiries about the diaconate, since that person is responsible for making formation recommendations to diocesan officials.

Yet he said it’s also crucial for permanent deacons to make themselves available to potential deacon candidates as Deacons Kinsky and Welch have done because even a quick chat during the early stages of discernment can be meaningful.

“I remind them that many of us can look back to a conversation with a deacon, or a deacon (husband and wife) couple, to inspire our own vocations,” Deacon Giblin observed.

What type of Catholic man is a candidate for such conversations?

A leading indicator, according to Deacon Giblin, is the degree to which he engages with parish committees and other volunteer activity.

“I really look for people with involvement in church community,” Deacon Welch agreed.

Deacon Kinsky recalled that a fellow St. John of Rochester parishioner, Thomas Cleary, first spoke with him about the diaconate during their service together — along with their wives — with the parish’s family life committee. Deacon Cleary was ordained a permanent deacon in 1991; he passed away in March 2021.

At the very least, Deacon Kinsky said, a potential deacon should be participating regularly in Sunday Mass. “If you’re not there, how can you sense this is a call for you?” he remarked.

Also of great importance, he added, is a person’s inner qualities: “Is there a sense of compassion within? Do you have an empathy for others? Are you a good listener?” Deacon Kinsky said.

Deacon Welch, meanwhile, said he bases the potential for diaconal service on how much the individual strives “to be a compassionate presence to all human beings, to everyone.”

Before taking any steps, Deacon Giblin said, men interested in the permanent diaconate should gain a firm sense of what the commitments entails, starting with five years of formation, including graduate-level education as well as field ministries.

Once ordained, permanent deacons are required to make volunteer commitments of 10 hours per week, performing a wide range of parish and community service, until reaching senior status at age 75.

Deacon Giblin said more than 200 permanent deacons have been ordained in the Rochester Diocese since 1982; a total of 81 remain active in the diocese and 46 are on senior status. He noted that men ages 31 to 57 are eligible to begin formation, and pointed out that those who are still raising families should be especially mindful of the added responsibilities they would assume.

“It’s a lot of commitment,” Deacon Giblin remarked, noting that the life of a deacon involves balancing family, work and ministry — with family topping the list of priorities.

Deacon Kinsky also noted the importance of a wife’s support and involvement in a deacon’s ministry. If a deacon’s commitments end up putting a strain on his marriage, “We’re not going to be of any service to ourselves or the church,” he said.

His wife, Sheila, recalled that the priority on a deacon’s home life was stressed with Deacon Kinsky’s inaugural class from the beginning of their formation process.

“Our marriages were very much supported,” Sheila Kinsky said.

Much diaconal service is behind the scenes

Also crucial to advancing toward diaconal ordination, Deacon Giblin said, is a willingness to carry out the four pillars of diaconal service: human, spiritual, pastoral and intellectual. Often, he said, men who inquire about the permanent diaconate are not aware of the range of duties involved.

“They only see deacons assist the priest at Mass. They don’t realize we have guys doing service in hospitals and prisons, on college campuses,” he said, noting that deacons make a special effort to minister to people in physical, spiritual and economic need.

Noting that some men he’s spoken with primarily have been interested in preaching at Mass, Deacon Welch said he explains that a deacon’s most vital contributions often occur out of the public eye.

“It’s what they do, not just what they say, that’s important,” he remarked.

Deacon Kinsky added that a permanent deacon must remain humble in his ministry, even if his professional career involves being in the spotlight.

“It’s a servant leadership. You’re not the top dog, necessarily,” he said. “Am I willing to wash the feet of someone else, figuratively?”

Deacons should be positive role models

In addition to talking with potential candidates about the diaconate, Deacon Giblin said providing positive examples of deacons in ministry is crucial to attracting more men.

Deacon Welch agreed. “I think the first thing, in promoting anything, is being a model,” he said. “You’ve got to live it, you can’t just speak it.”

Deacon Giblin offered a personal example to support that assertion: Alex DeLucenay — one of three men due to be ordained permanent deacons by Bishop Salvatore R. Matano on May 21 — credits his interest in the diaconate to observing Deacon Giblin in ministry at Rochester’s Holy Cross Parish approximately 20 years ago when DeLucenay was an altar server there.

In much the same way, Deacon Giblin said his first exposure to permanent deacons in the 1980s helped pave the way for his ordination in 2000.

“They appeared to be happy deacons, to have an authentic, genuine ministry and faith-filled presence,” he said. “If you show people that you’re happy, it kind of radiates and makes the ministry attractive to them.”