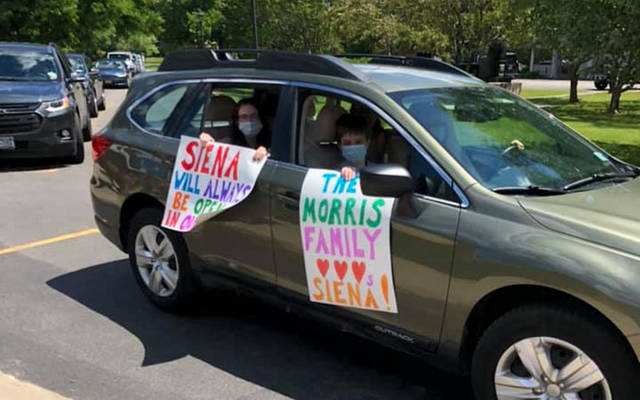 The eighth-grade graduation ceremony for Siena Catholic Academy‘s class of 2020 was bittersweet.

The event, which took place via the Zoom online video conferencing platform, simultaneously marked both the school’s first virtual graduation ceremony as well as the final graduation in its 26-year history. Siena Catholic Academy, the only stand-alone Catholic middle school within the Diocese of Rochester, closed permanently at the end of the 2019-20 school year in June due to declining enrollment worsened by the current COVID-19 global pandemic.

Principal David Carapella did not dwell on the school’s impending closure during his address to the class of 2020 and their families during the Zoom graduation ceremony, however.

“I started by saying we all know what the reality is, but this is a positive night. This is a night for you and your families to enjoy,” Carapella later told the Catholic Courier. “Instead of the students coming up on the stage and receiving their awards, we showed pictures of them throughout the years as we called their names. We had kids read a couple Scriptures and then (reflect on) what Siena meant to them over the years. It was very touching.”

Carapella and the rest of Siena’s faculty and staff worked hard to provide closure for all of the students in the Brighton school’s sixth, seventh and eighth grades, he said. Virtual ceremonies held via Zoom for the school’s sixth and seventh grades each drew more than 60 people and featured prayer services, student readings and photos that had been taken of the students earlier in the school year.

“It was a special way for us to let the students and families know how much we cared for them in a time that was very difficult,” explained Mercy Sister Laurie Orman, Siena’s campus minister and seventh- and eighth-grade religion teacher. “Being out of school and not being able to say goodbye to your friends and teachers is hard, but to add in having the school close permanently was anther layer that we were not expecting, so we worked together as a team and helped them see how what they learned at Siena will carry with them wherever they will go.”

The culminating event of the school year, Carapella said, was a drive-through event that took place June 24, when families and students were able to say goodbye to the teachers and staff — from their cars — and pick up students’ Chromebooks, as well as tote bags and Bibles the school purchased for the children.

When the faculty and staff found out the school would be closing at the end of the school year, they immediately scheduled Zoom meetings between the entire faculty and the students in each grade level in order to answer students’ questions and “be a face in the midst of the sadness, even if it was virtual,” Sister Orman said. Siena’s faculty also set up Zoom meetings between the eighth-grade class and Siena alumni who also are alumni of the local Catholic high schools, since the eighth-graders missed out on the springtime high-school visits that had been scheduled before the pandemic interfered.

“We were trying to do whatever we could to help the students begin to look at a new school,” Sister Orman said.

This type of care and concern for the students has been a hallmark of the Siena school family, according to Lisa Shemirani, whose son, Will, just graduated from Siena.

“I just knew every morning when I drove up and let him out of the car, I could leave with this sense of knowing he was going to be great there, and it was such a nice feeling,” Shemirani said. “It was that sense of knowing they were going to take care of him there.”

Shemirani said her son enjoyed the three years he spent at Siena.

“He said from the day he walked in he just had such a great feeling there. It was just a great environment. Everybody knows everybody,” she said.

Siena’s 170 students knew and looked out for each other, and were known by name and cared for by the faculty, Sister Orman agreed.

“I don’t mean this to be trite, but it was really like a family,” Carapella added. “When you walked in the building, you could feel it. ‚Ä¶ It’s almost tangible, and that is what I believe made Siena so special.”

Siena provided an excellent Catholic education for her sons, noted Karen Benacci, mother of a 2019 Siena graduate as well as a seventh-grader. Siena’s faculty wanted students to develop relationships with Jesus and know God was with them, Sister Orman said.

“We tried to ‚Ä¶ see where our faith can help us in situations like this,” Sister Orman said of the school’s permanent closure in the midst of a global pandemic. “God is with us, whether we are at Siena or another school. We have to trust that and carry that with us.”