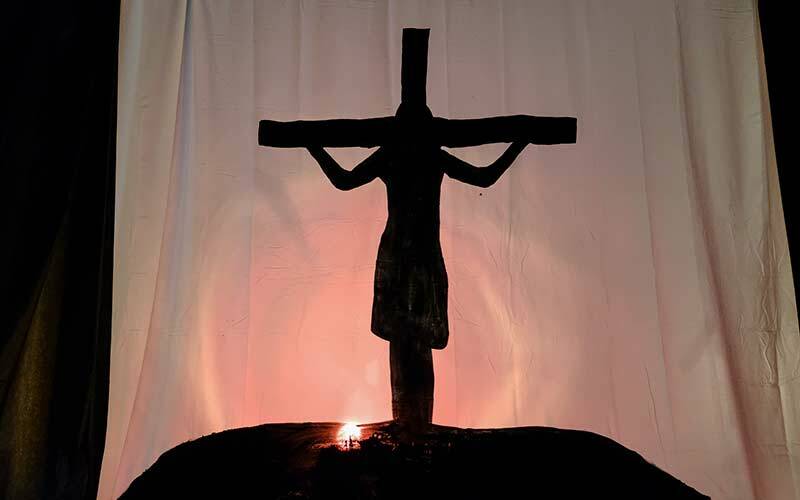 In 2021, St. Catherine of Siena Church in Mendon created a self-guided Shadow Stations of the Cross in its community center that featured painted, backlit panels. (Courier photo by Jeff Witherow)

The following parishes informed the Catholic Courier of their Lenten activities.

• St. Alphonsus in Auburn is participating in a project called 40 Cans for 40 Days. Parish families are being asked to donate 40 cans of food during Lent that will be distributed to the less fortunate in the community.

• St. John the Evangelist in Greece will offer takeout fish fries from 4 to 7 p.m. on Lenten Fridays. Stations of the Cross will be held Lenten Wednesdays following the 8:15 a.m. Mass beginning March 9 and Lenten Fridays at 5:30 p.m. beginning March 4. A retreat will take place Lenten Wednesdays from 6 to 7 p.m. on such topics as forgiveness and healing. Call 585-225-8980 for more information.

• St. Kateri Parish in Irondequoit will have Quiet Time in Prayer at 7 p.m. on the Tuesdays of March and Stations of the Cross at 7 p.m. on Lenten Fridays at Christ the King Church.

• St. Monica in Rochester will have adoration on Lenten Saturdays from 3 to 4 p.m. prior to the 4 p.m. Mass.

• Immaculate Conception/St. Bridget in Rochester will have Stations of the Cross on Lenten Fridays at 6 p.m.

• At St. Christopher in North Chili, Stations of the Cross will be prayed on Lenten Fridays at 7 p.m., and there will be a Good Friday Living Stations at 7:30 p.m.

• St. Paul in Webster is presenting a Lenten Reflection Series with speakers at 6:30 p.m. March 3 (baptism and confirmation with Sister Karen Dietz), 10 (the beatitudes with Sister Laurie Orman), 24 (the Eucharist with Father Robert Kennedy) and 31 (the Nicene Creed with Christine Kvam). The series will conclude at 6:30 p.m. April 6 with Stations of the Cross.

• St. Rita in Webster will offer drive-through pick-up fish fries from 5 to 6:30 p.m. on Lenten Fridays. Preorders and prepayments are due by 6 p.m. on Thursdays at www.stritawebster.org. A discussion of the book A White Catholic’s Guide to Racism and Privilege by Father Daniel Horan will be at the church and via Zoom on Lenten Wednesdays in March at 7:30 p.m. and Fridays March 11, 18, 25 and April 1 at the church at 9 a.m. A Taizé Prayer Service will take place March 9 at 6:30 p.m.

• St. John of Rochester in Fairport will have Stations of the Cross at 7 p.m. on Lenten Fridays and a Lenten Family Event March 19 from 9 a.m. to noon.

• On Lenten Wednesdays March 9-April 6, Holy Spirit in Webster and St. Joseph in Penfield will offer a virtual Bible study of Romans via Zoom from 7 to 8:30 p.m. To register, email classicaldoc@gmail.com. Holy Spirit will have a 6 p.m. soup supper and 7 p.m. Stations of the Cross on Fridays March 4-April 15. Taizé prayer services will be livestreamed from St. Joseph at 7 p.m. March 21 and April 11. A reflection on the Last Supper with Ann Sakmyster will take place at Holy Spirit at 7 p.m. April 4.

• All Saints Parish in Corning will have a Bible study on the theme “The Book of Hebrews and Its Connection to the Sacred Liturgy” from 7 to 8 p.m. on Wednesdays March 9-April 6. Stations of the Cross will take place on Fridays at 11:30 a.m. and 5:30 p.m. March 4-April 8. Lenten meals will follow at 6 p.m. in the school gym.

• Immaculate Conception in Ithaca will offer Stations of the Cross at 6:30 p.m. on Lenten Fridays. Holy Hours will take place Thursdays from 11 a.m. to noon before the 12:10 p.m. Mass and first Saturdays of each month at 3 p.m. Evening Holy Hours on Lenten Sundays from 6 to 7 p.m. will be hosted by young adults.

• Each Friday of Lent from 7 to 8 p.m., Schuyler Catholic Community in Watkins Glen/Odessa will have a Holy Hour with adoration at St. Mary of the Lake in Watkins Glen.