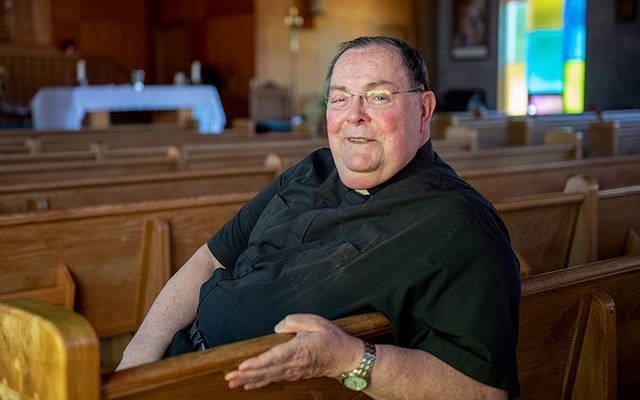 Father William Darling has retired after 47 years as a priest. (Courier photo by Jeff Witherow)

Father William Darling’s faith has grown over the course of his 47 years as a priest. And although he achieved senior status at the end of June 2020 when he retired from the pastorate of northern Cayuga County’s Our Lady of the Snow Parish, his faith journey is far from over.

“I still find myself growing as a disciple, and finding ways in which I’m understanding the faith better,” Father Darling said in October.

Father Darling grew up in a large family in Clifton Springs. His parents adopted seven children, which Father Darling said helped him learn about understanding others. The Darling family belonged to St. Felix Parish in Clifton Springs, where he attended public school until his junior year of high school in 1962, when he entered Rochester’s St. Andrew’s Minor Seminary. Father Darling later become part of the first class at Becket Hall at St. John Fisher College in Pittsford before completing his seminary studies at St. Bernard’s Seminary in Rochester.

Bishop Joseph L. Hogan ordained Father Darling on April 27, 1973, at St. Paul of the Cross in Honeoye Falls. The new priest then served as assistant pastor at St. Mary Parish, Dansville (1973-76), and St. Joseph Parish, Penfield (1976-79), before beginning graduate studies, first at Fordham University in New York City and later at the Jesuit School of Theology at Berkeley, Calif.

When Father Darling was asked what he’d like to do for his next assignment, he indicated that he’d like to take on a pastorate in Monroe County. Several weeks later, he was asked to go to St. Patrick Parish in Owego as associate pastor.

“I said to myself, ‘This sounds like God speaking.’ I said to him, ‘Yes,’” Father Darling recalled.

He eventually did become pastor at St. Patrick and remained there until 1993 when he became pastor at St. Salome Parish, Irondequoit (1993-97), and later St. Christopher Parish, North Chili (1998-2002). Father Darling underwent a liver transplant in 2003 and was on medical leave until 2004, when he became parochial administrator at St. Michael Parish in Lyons. In 2007 he left Lyons to become parochial vicar of St. Mary Parish, Canandaigua (2006-10), and then became pastor of Our Lady of the Snow in 2011.

After leaving Our Lady of the Snow, Father Darling moved to the rectory at Our Mother of Sorrows Parish in Greece, where he helps at Mass and hears confessions.

“Celebrating the Mass and hearing confessions — they’re very special moments for me, and I’m sure for a lot of folks,” Father Darling remarked.

However, he said the highlights of his 47 years of ministry have been the annual liturgies and traditions of Holy Week, with the Easter Vigil being a particular favorite.