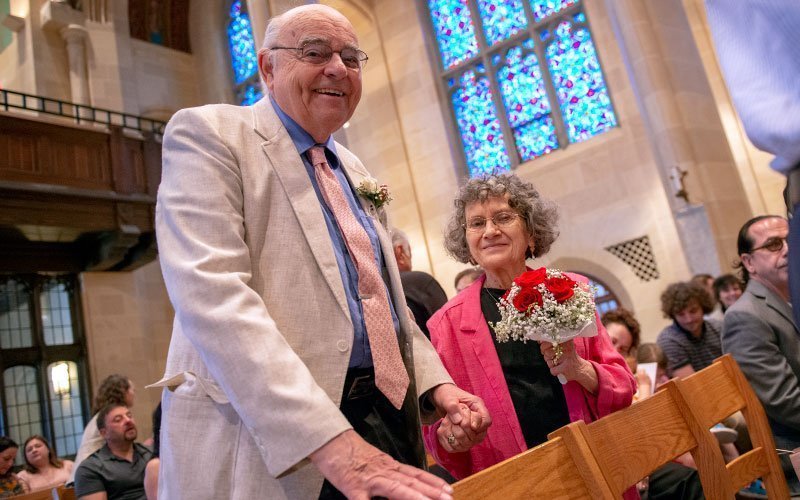 George and Mary Bauer, who have been married for 60 years, smile after renewing their vows during the Marriage Recognition Mass at Sacred Heart Cathedral May 19. (Courier photo by Jeff Witherow)

ROCHESTER — On May 19, married couples from around the Diocese of Rochester had the opportunity to say “I do” all over again.

That day, Bishop Salvatore R. Matano invited couples to Sacred Heart Cathedral for the Diocese of Rochester’s annual Marriage Recognition Mass, during which they could renew their wedding vows.

During the liturgy, couples held each other’s hands, gazed into one another’s eyes and smiled as Bishop Matano prayed and vows were exchanged.

The longest-married couple to attend the Mass, Robert and Dolores Crowell, parishioners of St. Joseph Church in Penfield, have been married for 70 years. They first met at a party when they were just 14. It would be a few years later until the two met again, and they became inseparable.

“We saw each other again when we were 17, and the rest is history, as they say,” Robert Crowell said.

The Crowells have one daughter, Cindy Lee, as well as three grandchildren, all of whom are married. Lee attended the Mass with her parents.

“They’ve lasted this long because of their love and friendship,” Lee said of her parents’ successful marriage. “They’re each married to their best friend.”

Before Mass ended, Bishop Matano approached the couple as they were surrounded by their loved ones and delivered a special congratulations for being the longest-married couple at the liturgy.

“It really does mean a lot. I remember when I first sent the wedding announcement to the Courier, and now here we are all these years later celebrating again,” Robert Crowell said.

Also celebrating a milestone anniversary are George and Mary Bauer, who attended the Mass with their daughter, Bernadette Piccininni, and some of their grandchildren. The Bauers will celebrate their 60th anniversary this year.

“They are truly a match made in heaven,” Piccininni said of her parents.

George Bauer was volunteering at The Genesee Settlement House in Rochester 1956 when he first met Mary, who was a summer camp counselor there. They were married three years later. The couple purchased a four-bedroom Rochester home in 1960 where they raised their six children and where they still reside.

Five of the Bauers’ children live within walking distance of their parents’ home, and the couple’s 18 grandchildren all live in the Rochester area. One of the Bauers’ grandchildren, Helena Piccininni, said she really enjoyed growing up being able to visit her grandparents regularly during the summer.

“We would have ‘Wonderful Wednesdays’ where we would help clean the house while getting to know all about her (Mary’s) traditions and why they were important,” Helena Piccininni said.

She said she now lives a street away from her grandparents and would not have missed the opportunity to help celebrate their long marriage during the Wedding Recognition Mass.

Bernadette Piccininni said her parents still maintain their traditions as a couple, such as taking walks together, attending weekly Mass and enjoying “tea at 10” just as they did when they first began courting.

“Their marriage has aged as wonderfully as they have,” she said. “My father is as tender with my mother as he always was. Seeing them walk together while they are in their 80s is a beautiful thing.”

In addition to longer-married couples like the Crowells and the Bauers, the Mass also celebrated those who married more recently.

Mariagoretti and Uche Oparah, who moved from Nigeria to Rochester five years ago, have been married for seven years. They met through Uche’s parents, and Mariagoretti Oparah said the two clicked right away.

“Open, honest communication is the key, and forgiveness is a virtue,” she said of having a successful marriage, noting that the couple makes sure to pray together every day as well.

The Oparahs regularly attend St. Charles Borromeo Church in Greece with their two young boys, Chika and Chigozie. Being a younger couple, Mariagoretti Oparah said it is important to have patience and be patient, but most importantly always ready to forgive.