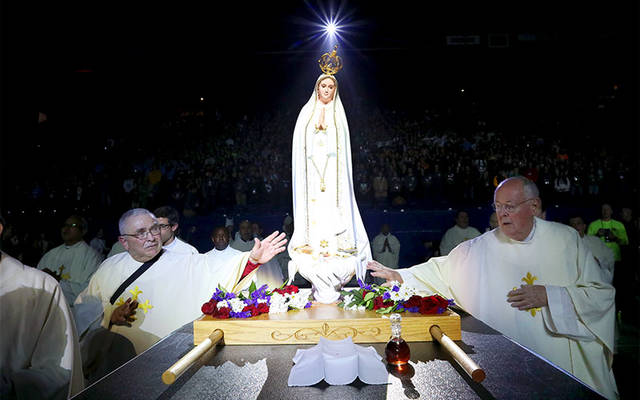 Priests touch a statue of Our Lady of Fatima during the entrance to the closing Mass Nov. 23, 2019, at the National Catholic Youth Conference in Indianapolis. (CNS photo by Karen Bonar) 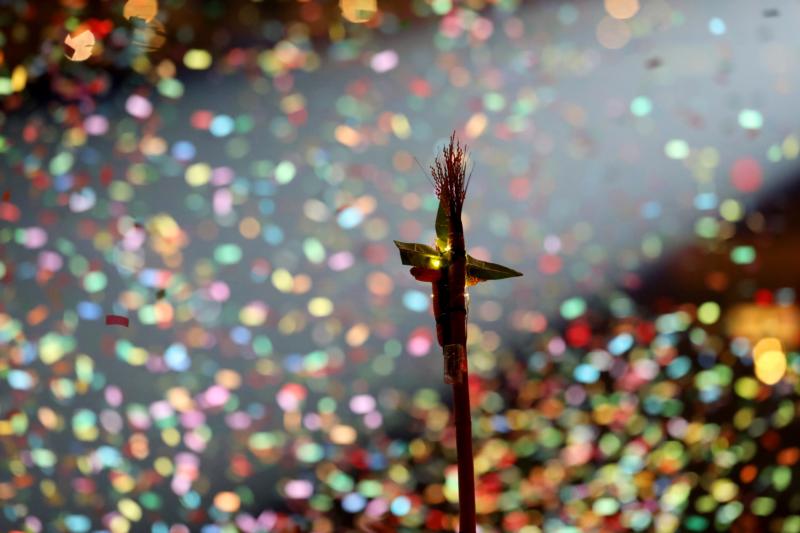 For hundreds of teens from the Rochester Diocese, Indianapolis served as the ideal spot for building relationships.

That’s where the National Catholic Youth Conference took place this past Nov. 21-23. Participants representing Southern Tier parishes reported that, thanks to NCYC, they deepened bonds within their parish groups, made new connections with youths from around the country, and strengthened ties with God and their Catholic faith.

The three-day conference featured Masses, musicians, speakers, workshops, adoration, the sacrament of reconciliation and other prayer opportunities. For Julia Jankowsky, a major highlight occurred during one of the general sessions when adults were asked to pray over the teens.

“I don’t think I have ever felt more love. It was the first time in a long time that I felt God right there with me,” recalled Julia, 15, who was part of an eight-youth, seven-adult contingent from Ithaca’s Immaculate Conception Parish.

Julia said that the number of NCYC participants “made a huge impact on me.” She was one of 20,000 youths and adult chaperons to attend the conference, with 323 representing the Diocese of Rochester (229 teens and 94 adults.)

Jacob Davis agreed that “hearing 20,000 people singing along to the songs and the church hymns, it was very moving and amazing.” He said he was energized by the rest of his NCYC experiences as well.

“I was kind of expecting to be bored. But I was always engaged,” said Jacob, 15, who was among six teens and two adults from the cluster of St. Mary, Honeoye/St. Matthew, Livonia.

Jacob noted that, in particular, he “ended up getting a lot out of adoration.” Meanwhile, Gigi Galanthay, 17, from Ithaca’s St. Catherine of Siena Parish, called her adoration experience “amazing.” She said that despite the large number of people in attendance, “it was so quiet that you could almost hear a pin drop,” with scores of youths running toward the altar and kneeling before the Blessed Sacrament during the service.

Another memorable experience for Gigi, a second-time NCYC participant, was being interviewed about her 2019 experiences along with Caelan Murphy, a fellow parishioner, and Ashley Blank, St. Catherine’s faith-formation coordinator, during a livestreamed NCYC broadcast. The 14-minute interview can be found at www.youtube.com/watch?v=yahGQ1icoKk and begins at 5:33.40.

Gigi and Jacob also noted the conference’s fun aspects, such as exchanging clothespins with social-media user names inscribed on them.

“I actually met a lot of really nice people that I’m still in touch with,” Jacob said.

Julia, along with Ella Hoskins, 16, said they also developed deeper bonds with their parish groups, thanks to extended time spent together at the conference and on the long bus rides to and from Indianapolis.

“It felt like I had another family,” Julia said of her parish cohorts.

“By the end we all felt closer with each other and stronger in our faith,” said Ella, who — like Julia and Jacob — was a first-time NCYC participant. She was among eight teens and five adults from Holy Family Catholic Community.

The NCYC is held every two years and will return to Indianapolis in 2021.

“It’s an experience unlike any other,” said Gigi, who was in a 17-youth, five-adult group from her parish.

“If you get a chance to experience this, you should go,” Julia added.

As for Ella, she acknowledged that going into the conference, she’d been struggling with being open about her Catholic faith for fear of others making fun of it. However, she returned home feeling renewed, saying the experience “brought tears to my eyes” because so many people shared her beliefs.

“NCYC taught me it was OK to express what I believed in and to just be myself and be a Catholic teen, and that was OK and no one should look down upon me,” Ella said. “I feel closer to God, my group and the church in general.”