Diocese of Rochester's Catholic schools give back during pandemic - Catholic Courier 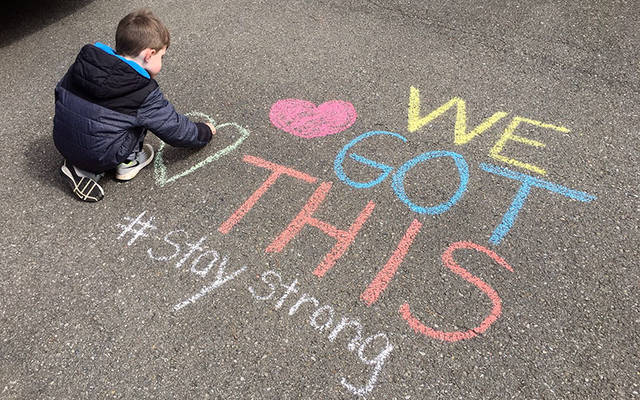 “When you can’t find sunshine, be the sunshine.”

“Smile. Peace be with you.”

“We’re in this together.”

Those phrases are just a handful of the dozens of inspirational messages that could be found on driveways and sidewalks in the Horseheads area in early April, thanks to members of the St. Mary Our Mother School community. On April 2, a post on the school’s Facebook page encouraged students and families to spread love through their community by using sidewalk chalk to leave uplifting messages and artwork on their driveways and nearby sidewalks. One week later, 65 photos of the students’ handiwork were posted to the Facebook page, along with a message of thanks.

“The powerful messages have brought a great deal of hope and love to many around our community,” read the post from St. Mary Our Mother School.

Students, families, faculty and staff from other local Catholic schools also have found ways to spread hope and love through their communities during this time of pandemic, even though the school buildings currently are closed. Shortly after in-person learning was suspended in mid-March, several principals sprang into action to ensure the perishable items already in their school’s kitchens would not go to waste. St. Agnes School in Avon donated the cartons of students’ milk in its kitchen to the Avon Food Pantry, which is based out of St. Agnes Church, said Principal Elizabeth Jensen.

“We just don’t believe in wasting anything that we’re not going to need, and we knew that our community was going to be in great need,” Jensen explained.

Jensen’s favorite part of the experience, she said, was seeing how many parents and other members of the school community contacted her to suggest donating the milk, not realizing that it already had been donated.

“It was neat to see how many people thought of it. … It’s on the front of so many people’s minds, making sure the people in our community are supported,” she said.

Families at Holy Cross School in Charlotte brought donations of nonperishable food items to a drive-through May Crowning event that took place May 10 at the Marian grotto and parking lot at Holy Cross Church. The food drive was part of a Mother’s Day event that combined faith, service and fellowship, as it also included an opportunity for families and Holy Cross supporters to drive past and congratulate the school’s graduating sixth-graders, who were dressed up, masked and spread at least six feet apart.

Service has been a part of St. Agnes School’s recent distance-learning curriculum. During the first few weeks of distance learning, students made cards for residents of the Avon Nursing Home.

“They each made three to four cards. Some of them included Bible verses on them,” Jensen said.

The students sent these cards to the third-grade teacher, who dropped them off at the nursing home.

“She recognized that those people are becoming especially isolated during this time, so she wanted to do that,” Jensen said. “We wanted to make sure they knew we were thinking of them in this time when it’s a little lonely and a little scary.”

One class continues to send cards to the nursing-home residents, while the rest of the school community has turned its attention to health-care workers, Jensen said. Students “adopted” and are making cards for parents and others who are working in stressful situations, some of them in the COVID-19 units of local hospitals.

“The service projects that put faith into action are very important to our school,” Jensen said.