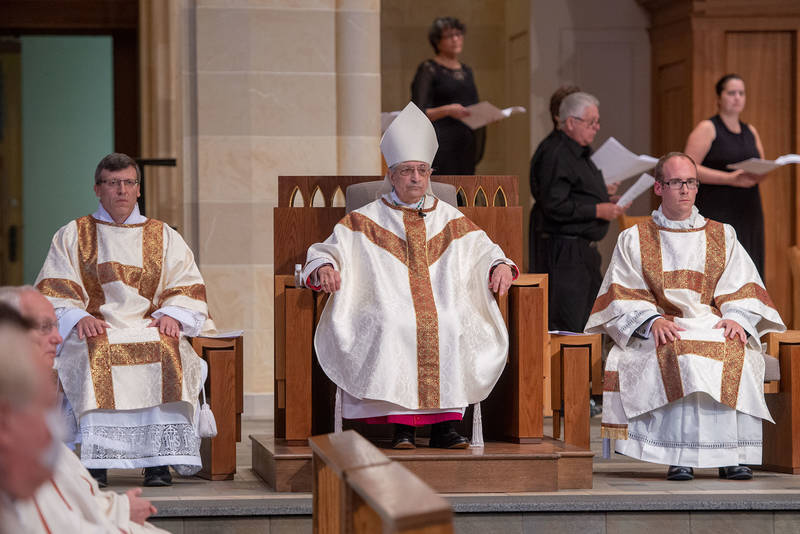 ROCHESTER — On Aug. 21, Deacons Aaron Kelly and Brian Mizzoni traveled to Rochester from their native Southern Tier for a monumental event in their lives — one that ended a formation journey involving several years of study, prayer and service.

And, at around noontime on this special Saturday, they began a new journey: Their ministerial lives as deacons for the Diocese of Rochester.

Deacons Kelly and Mizzoni were ordained by Bishop Salvatore R. Matano during a Mass at Sacred Heart Cathedral. Deacon Kelly became a transitional deacon on his way to the diocesan priesthood, and Deacon Mizzoni was ordained a permanent deacon.

Both newly ordained deacons sported wide smiles as they were greeted after Mass by family members, friends, fellow deacons, priests, seminarians and other well-wishers.

“I feel very excited,” Deacon Mizzoni said. He added that he’d prepared for the ordination early that morning by praying the rosary while traveling with family members to Rochester from Steuben County: “I meditated and put it all in the hands of Our Lady,” he said.

Indeed, the Horseheads native began seminary right out of high school eight years ago. He grew up in St. Mary Our Mother Parish, and his family currently worships at Blessed Trinity/St. Patrick parishes in Tioga County.

As a transitional deacon, Deacon Kelly’s diaconate will only last one year. He will return to Rome Sept. 3 to resume studies at the Pontifical North American College, and he is slated to become a diocesan priest in mid-2022. Deacon Kelly’s priestly ordination will be followed by two more years of schooling as he pursues a licentiate in canon law.

As for Deacon Mizzoni, he now begins his ministry as a permanent deacon at his parish, All Saints Parish in Corning, where he is involved in many ministries. He and his wife, Tracy, have three young-adult children. Deacon Mizzoni began formation for the permanent diaconate in January 2017, taking classes through St. Bernard’s School of Theology and Ministry and performing a variety of field ministries. He is employed by Corning Inc. as an IT engagement leader for the company’s manufacturing, technology and engine division.

Transitional and permanent deacons, by virtue of their ordination, may serve at the altar, proclaim the Gospel and preach at Mass; they also are authorized to preside at baptisms, witness marriages and officiate at funerals outside of Mass.

Deacon Mizzoni said he’s looking forward to serving both his family within the Catholic Church and his biological family, saying he expects his ministry as a permanent deacon to strengthen both families.

Meanwhile, Deacon Kelly spoke of his diocesan family, noting that he gladly anticipates being reunited with them when his schooling is finally done.

“People in our diocese have been so good to me over the years. My desire is to go back and serve them,” he said.