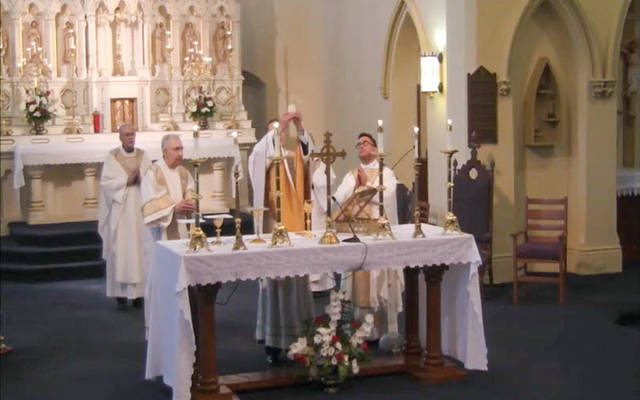 There was a distinctly Southern Tier flavor to Father Joseph Martuscello’s debut weekend in the priesthood.

Father Martuscello, 28, celebrated his first Mass of Thanksgiving on Sunday, June 14, on the Solemnity of the Most Holy Body and Blood of Christ. The liturgy took place a day after he was ordained the newest priest of the Diocese of Rochester by Bishop Salvatore R. Matano.

Both joyous events were held at St. Mary Church in Corning, Steuben County, which serves as the worship site for All Saints Parish. Meanwhile, Father Martuscello’s home parish of Ss. Isidore and Maria Torribia (St. Catherine of Siena, Addison; St. Stanislaus, Bradford; and St. Joseph, Campbell) is located just to the west of Corning.

“We are rejoicing a native son who has said ‘yes’ to God’s call,” Father Matthew Jones, pastor of All Saints and an Elmira native, said near the start of his homily at the Mass of Thanksgiving.

Lasting nearly two hours, the mid-afternoon Mass was livestreamed by All Saints Parish and can be viewed at https://www.youtube.com/watch?v=_5300Zze33E. Limited live attendance marked both that liturgy and the ordination Mass, in keeping with statewide attendance limitations on public worship due to the coronavirus pandemic.

Earlier on June 14, Father Martuscello celebrated a private morning Mass for family members. In his remarks to the congregation and livestream viewers toward the end of his Mass of Thanksgiving, the new priest noted the importance of family in supporting his vocational journey. He particularly noted his mother, Mary — whose intense devotion to the rosary and Blessed Virgin Mary, he said, inspired a similar commitment on his part — and his late father, Stephen, for whom he offered the Mass of Thanksgiving.

Father Martuscello also thanked many others for their ongoing support and encouragement. Among them were Bishop Matano; fellow priests as well as deacons; classmates and faculty at Franciscan University of Steubenville, from which he graduated in 2015, and at St. John’s Seminary in Boston, at which he recently completed studies; and members of All Saints and Ss. Isidore and Maria Torribia parishes.

Later this month, Father Martuscello will move to northern Monroe County where he will begin his first priestly assignment. Bishop Matano has appointed him parochial vicar at Our Mother of Sorrows in Greece and Holy Cross in Rochester, where Father William Coffas serves as pastor of both parishes. Father Martuscello’s appointment will take effect Tuesday, June 30.

And so begins a priesthood that, according to Father Martuscello, has become reality after a decade’s worth of pursuing a vocational call.

“Ten years ago I heard God calling me in the depths of my heart,” he recalled.

Speaking of that call, Father Martuscello encouraged other young men watching his Mass of Thanksgiving to seriously explore whether God is inviting them to a priestly vocation as well.

“God may be calling you. He needs workers in the vineyard for the Lord,” he said.

As for his own response to God’s call, which eventually led to his ordination, Father Martuscello couldn’t be happier.

“I am so thankful to almighty God for giving me the grace to become a priest,” he stated.