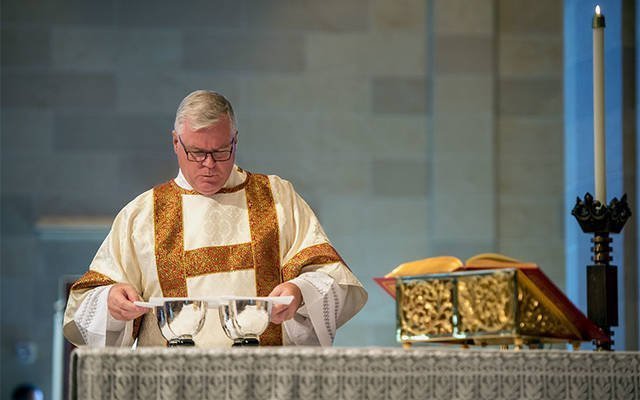 Deacon Edward Giblin prepares the altar during the Diocese of Rochester’s sesquicentennial Mass at Sacred Heart Cathedral Sept. 22, 2017. Deacon Giblin is director of the diocese’s Office of the Permanent Diaconate. (File photo)

They assist priests at Sunday Mass, proclaiming the Gospel and often delivering homilies as well.

They play vital roles at baptisms, marriages and funerals.

They perform a wide range of volunteer duty in their communities.

These devoted men belong to the permanent diaconate, answering God’s call to service week in and week out — while, in many cases, striving to balance their ministries with marriage, family and full-time employment.

Permanent deacons have strengthened the church and wider community across the Diocese of Rochester since the first class was ordained 36 years ago. According to Deacon Edward Giblin, director of the Office of the Permanent Diaconate, the diocese currently has 140 permanent deacons, with 93 in active ministry.

Deacon Giblin noted that permanent deacons share their unique ministerial gifts in a variety of ways — not only in parishes but also in such places as prisons, hospitals, colleges and charitable organizations.

“They’re willing to give of their time and their talent to the people of God,” Deacon Giblin said. “There’s a ton of talent in the deacon community, and we try to harness that.”

Spurred by a call to carry on Jesus’ role as servants to those in need, permanent deacons were prevalent in the early church. Although the permanent diaconate continued on in the Eastern Catholic churches, this ministerial role dissipated in Roman Catholicism by the Middle Ages, with the transitional diaconate remaining only as a step toward priesthood. In 1967, based on recommendations from the Second Vatican Council, Pope Paul VI approved restoration of the permanent diaconate in the universal church. Formation for permanent deacons in the Diocese of Rochester began in the late 1970s, and the inaugural class was ordained in 1982.

The Diocese of Rochester currently has 18 men at various levels of formation for the permanent diaconate, including three who are scheduled to be ordained Saturday, May 26, along with two transitional deacons (see related story on page 18.) Formation occurs over a five-year period and involves three stages prior to ordination: inquiry, aspirancy and candidacy.

Men at the inquiry level take classes at St. Bernard’s School of Theology and Ministry and are linked with spiritual directors. Upon successful completion of a one-year inquiry, they are invited by Bishop Salvatore R. Matano to become aspirants, engaging in a second year of study.

They then spend three years as candidates, continuing a curriculum that delves into such areas as spiritual formation, Scripture, church history, ecclesiology, Catholic moral theology, canon law, pastoral ministry and preaching. Candidates also are required to perform field education — typically in the summer — at parishes, social-ministry agencies and health-care facilities. For instance, Roger Loucks — a candidate projected to be ordained in 2020 — is assigned to Canandaigua’s F.F. Thompson Hospital this summer after having served at Catholic Charities of Steuben in the summer of 2017.

Potential permanent deacons must be between the ages of 35 and 62 at the time of ordination. They can be either married or single; those who are married must have the informed consent of their wives before entering the inquiry stage. If their marriages end, they may not remarry except in special circumstances. Those who enter the formation process while single must take a vow of celibacy. Men seeking this ministry typically demonstrate a strong faith and are highly active in their parishes and communities. Deacon Giblin encourages pastors and parishioners to call such people forth, saying that “personal invitation is very important.”

Such was the case for Loucks, who entered the inquiry process in 2016 after seeing an informational notice about deacons in the Our Lady of the Lakes Parish bulletin and being told by a fellow parishioner that he’d make a good deacon. Still, he acknowledged that he hesitated to commit himself.

“You have to wonder whether you’re worthy of this calling,” said Loucks, who attends St. Patrick Church in Prattsburgh, an Our Lady of the Lakes worship site. However, he said he came to realize that “nobody is worthy — but that doesn’t mean you’re not called.”

He said he also carefully weighed the commitment of taking rigorous graduate-level courses and having many evenings and weekends taken up by formation.

“It takes a lot of balance,” said Loucks, who is a physics professor at Alfred University. He and his wife, Catherine, have a 15-year-old daughter, Sarah.

A balancing act was certainly in order for Deacon Bill Coffey, who was ordained in 1983 as part of the second class of permanent deacons in this diocese. He recalled that when he began formation, his seventh and youngest child had just been born and he was working as a chemist for Eastman Kodak Co. The only time left to study, he said, was after the kids went to bed for the night.

“I didn’t get to bed very early. MaryLu (his wife) was always coming to tell me when she’d thought I’d had enough (of studying),” Deacon Coffey said.

Seeing Christ in others

Such a sense of commitment carries over into permanent deacons’ ordained ministry. Whereas a handful of deacons have paid positions with the Diocese of Rochester, Deacon Giblin noted that deacons’ ministry is by and large a volunteer effort. The expected combination of parish and community service is approximately 10 hours per week, although “the bishop reminds us that our first vocation is to our marriage and family,” he said.

In addition to their presence at Sunday liturgies, deacons are permitted by church law to preside at baptisms, witness marriages and officiate at funerals outside of Masses. They cannot celebrate Mass, hear confessions nor administer the sacrament of the anointing of the sick. They are obligated to engage in morning and evening prayer daily.

Permanent deacons may remain in active duty until age 75, at which point they must file for senior status — although many senior deacons, such as Deacon Coffey, may opt to continue in ministry to whatever degree they wish. Deacon Coffey, for example, assists at St. Joseph Parish in Penfield, provides spiritual direction and continues his longtime initiative of organizing prayer vigils at the sites of homicides in Monroe County.

Going back to the early days of the permanent diaconate in the Rochester Diocese, Deacon Coffey said that he and his cohorts spearheaded such efforts as prison ministry; assisting people with substance-abuse, family and financial issues; and advocating for the poor.

“The deacons were out there in the field. They could see things that could be addressed,” Deacon Coffey said, noting that permanent deacons bring a profound spirituality into their encounters with folks in need.

“You see Christ in one another,” he said.

Deacon Coffey acknowledged that the role of deacon “was like a blank sheet” in the early years of the permanent diaconate, as deacons, pastors and parish communities grappled with defining a deacon’s role. “It took a few years before it kind of smoothed out,” he said, but eventually, the acceptance level increased as it became apparent how positively deacons could contribute in their parishes and elsewhere.

With such accomplishments comes a sense of fulfillment, Deacon Giblin observed. He recalled being told before his ordination in 2000 by his spiritual director — who happened to be Deacon Coffey — that “You could never imagine the spiritual places you’ll be taken.”

Despite still being in formation, Loucks said he is already traveling to some of those places.

“I absolutely love it so far,” he said. “I’m becoming friends with the other candidates, getting to know the professors. My spiritual life has just blossomed.”