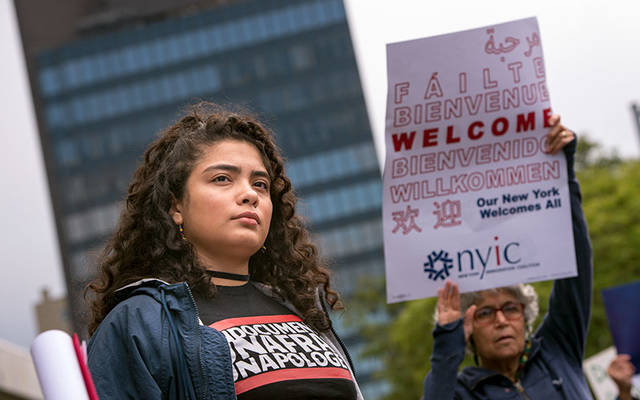 The threat of potential deportation from the United States hangs over the heads of several hundred thousand young immigrants.

The number of opioid-overdose deaths in western New York went up nearly 20-fold over a recent five-year stretch.

The possibility is increasing that full-term abortion will become legal in this state.

These sobering facts bespeak three vital human issues being addressed in 2018 by the Diocesan Public Policy Committee, which also is imploring diocesan Catholics to speak out on these concerns.

The committee’s two educational issues for 2018 are the possible statewide expansion of abortion rights and the ongoing opioid crisis. In addition, parishes across the diocese will conduct petition drives on Public Policy Weekend, Feb. 10-11, asking diocesan Catholics to give their signatures in support of the Development, Relief, and Education for Alien Minors (DREAM) Act of 2017.

The DREAM Act (S.1615/H.R. 3440) was introduced last July in both the U.S. Senate and House of Representatives, and is endorsed by the U.S. Conference of Catholic Bishops.

According to the National Immigrant Law Center, it would protect from potential deportation more than 2.1 million undocumented residents, including 800,000 who were brought to the U.S. as children and currently are shielded by the Deferred Action for Childhood Arrivals program.

In September 2017, the Department of Justice announced plans to terminate DACA — an executive order issued in 2012 by then-President Barack Obama — on March 5, 2018. As that deadline approaches, Congress has continued to wrangle over how to assist people who currently have DACA status. In a statement issued Sept. 5, USCCB leaders called the scheduled end of DACA “reprehensible,” adding that the Trump administration’s decision “shows the absence of mercy and good will.”

Petitions collected by the public-policy committee will be forwarded to state and national governmental leaders.

The committee’s attention to the DREAM Act is in connection to “Share the Journey: Love Your Neighbor,” a two-year global campaign supporting migrants and refugees that was launched by Pope Francis in September 2017.

Also of concern to the committee is the sharp rise in incidences of drug overdose. In September 2017, the Monroe County Medical Examiner’s office reported that in 2016 the use of heroin, opioids, fentanyl or related substances caused 206 deaths across a 10-county region in western New York, including Monroe and several other counties in the Diocese of Rochester. That death total represented a sharp rise from 85 opioid-related deaths in 2015 and just 11 in 2011.

Bishop Salvatore R. Matano has asked Catholic Charities to assist diocesan parishes in responding to this crisis. Among the suggested actions are offering space for recovery programs and support groups; increasing awareness of the drug problem and its dangers; supporting individuals and families affected by drug addiction; and focusing efforts on youths and prevention.

The public-policy committee’s second educational issue is the potential for abortion to be legalized beyond the 24th week of gestation for any reason whatsoever. Currently, late-term abortions are only legally permissible in New York if the mother’s life is at risk.

Each year since 2013, the state Assembly has passed an abortion-expansion bill, but has been thwarted by the state Senate. However, the public-policy committee warns that the current composition of the state Senate might be more prone to adopting such a measure.

To makes more voices heard in opposition to legalized late-term abortion, the committee is encouraging people to join the New York State Catholic Conference’s Catholic Action Network by visiting www.nyscatholic.org and clicking on the upper right of the home page.