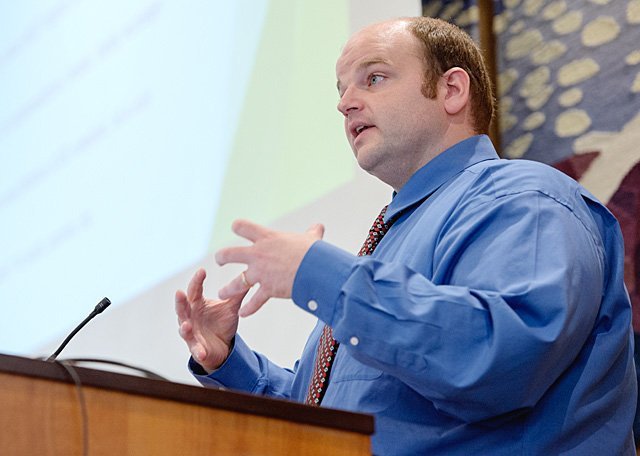 Jonathan Schott, Coordinator of Catechetical Services and Formation for the Diocese of Rochester, introduces the diocese's plans for the 2015 World Meeting of Families during an informational meeting Oct. 7 at the Pastoral Center in Gates. About 50 clergy and parish leaders will be part of the diocese's delegation to the meeting in Philadelphia next September.

GATES — The diocese is planning to send a delegation of at least 50 clergy and parish leaders to the World Meeting of Families in Philadelphia Sept. 22-25, 2015, officials said at a meeting Oct. 7 at the Pastoral Center.

Pope Francis confirmed Nov. 17 that he plans to visit Philadelphia for part of the meeting. Philadelphia organizers have said they are planning for 10,000 to 15,000 to attend the four-day gathering and many more for the papal appearances.

Hundreds of thousands of people are expected for a Festival of Families Sept. 26, and more than 1 million are expected for a Mass Sept. 27, with both events taking place along the Benjamin Franklin Parkway in Philadelphia’s center city.

Philadelphia organizers have said there are only 11,000 hotel rooms in the immediate Philadelphia area, so area residents have been asked to open their homes to attendees, Catholic News Service reported.

Other events connected with the weekend will include events at Philadelphia’s cultural institutions, a family 5K run and tours of five national Catholic shrines in the Philadelphia area.

Those who do not want to travel with the diocesan delegation and who can make other accommodation arrangements may be able to attend the public Masses, space permitting, but groups of 10 people or more must register with the diocese, said Jonathan Schott, coordinator of catechetical services and formation for the Diocese of Rochester.

Schott said delegates’ costs to attend will most likely be several thousand dollars. Sharon Herring, youth minister of Rochester’s Cathedral Community, said the trip’s costs may restrict the number of families who can attend, but there may be opportunities for people to participate if they have friends or family who could host them in the Philadelphia area.

"It’s exciting," Herring said. "It sounds like it will be a really wonderful experience, and the pull is the pope might be there."

"This seems so interesting because of the different kinds of families we serve," said Marianne Himmelsbach, faith-formation coordinator for the Cathedral Community. "I was thinking of the kids from Burma or the Congo. It would be great if we brought one or two of them."

But those who can’t be there in person can still join in the discussions at home, thanks in part to a catechesis on the family and lesson plans for grades K-12 that have been released in preparation for the meeting. The diocese has made the catechetical materials available to parishes, Schott said.

Michael Kirk, director of religious education at Fairport’s St. John of Rochester Parish, said his parish will be interested to see what digital materials or streaming will be available to allow those who wish to be able to follow along at home as the meetings happen. Yet some people may opt to take part in person, due to the nature of the occasion, Kirk said.

"We are entering into a very important period in the church’s history, and I think that would be worth a great deal of sacrifice to participate in this event," he said.

Editor’s Note: This story was updated Nov. 17, 2014, to reflect Pope Francis’ confirmation of a visit to Philadelphia.

World Meeting of Families details may be found at www.worldmeeting2015.org.