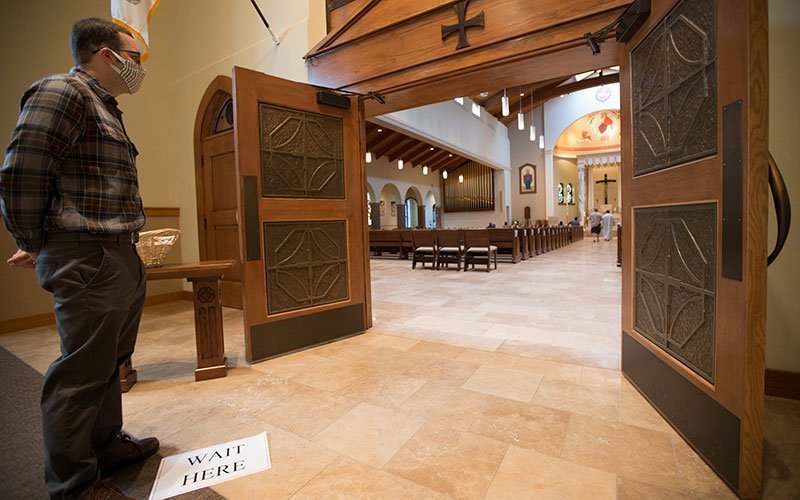 Brian Eberhardt of St. Paul, Minn., waits to be escorted to a pew at the Church of St. Peter May 19, 2020. (CNS photo by Dave Hrbacek, The Catholic Spirit)

WASHINGTON (CNS) — Catholic dioceses around the United States and Canada are issuing guidelines and other protocols or otherwise planning for the gradual reopening of churches as various governments allow more movement by public by revising stay-at-home orders first issued when the coronavirus was declared a pandemic.

Across the board these church protocols have many other commonalities, including no holy water in fonts, a prohibition on physical contact during the Our Father or the sign of peace, no presentation of the gifts, reception of Communion in the hand and for the time being the Precious Blood will not be offered at holy Communion.

As churches cautiously reopen, with the safety of congregants, priests, deacons and other parish staff foremost in the minds of Catholic officials, it will be the first time in about two months or more that most Catholics in the U.S., Canada and rest of the world have been allowed to attend the public celebration of the Mass. The continued livestreaming of Masses in most dioceses is being highly encouraged.

In the Archdiocese of Detroit, public Masses will resume for all parishes May 29, but individual pastors could, at their discretion, begin celebrating Mass publicly as early as May 19.

However, despite the reopening, “the Mass you may attend in the weeks ahead will look and feel quite different from the Mass you remember from two months ago” due to the need to continue practicing social distancing and rigorous sanitation, said Detroit Archbishop Allen H. Vigneron in his new directives, issued May 12. In addition, among other rules, the capacity inside churches may not exceed 25%.

Importantly, the archbishop noted that the Sunday obligation — the moral and canonical precept that requires weekly Mass attendance — would continue to be suspended for all of the faithful until at least, Sept. 6.

Across the state in southwest Michigan, Bishop Paul J. Bradley of Kalamazoo said public Masses can resume May 27 in anticipation of regular Sunday liturgy for the feast of Pentecost May 30.

The diocesan plan calls for each parish to establish what he called a “parish preparation team,” which would determine the proper number of people who can attend any one Mass, not to exceed 25% of church capacity.

“We plan to do everything we can to ensure the safety of God’s people and thorough preparedness is necessary,” Bishop Bradley said in a statement from the diocese. “We look forward to celebrating Pentecost with a renewed joy and hope for the future even though the number of people able to participate during our Level 1 return will be reduced due to our adherence to social-distancing guidelines.”

In the Archdiocese of St. Paul and Minneapolis, parishes were allowed to resume public Masses May 18, but — for the time being — must limit attendance to 10 people, Archbishop Bernard A. Hebda said.

Minnesota’s Catholic bishops are working to determine when larger Masses may resume in light of Gov. Tim Walz’s most recent plan for the state’s response to the COVID-19 pandemic, he said in a May 15 letter.

On May 13, Walz announced that his stay-at-home order would expire as planned May 18, but that the next phase of the state’s pandemic response, Stay Safe Minnesota, would continue to restrict religious gatherings to 10 participants.

That’s far fewer than hoped by the state’s bishops, who in early May encouraged parishes to begin preparing to resume public Masses.

Under Archbishop Hebda’s three-phase plan for the Archdiocese of St. Paul and Minneapolis — announced May 1 and released in full May 9 — parishes could enter “Phase 2” and begin offering Masses May 18 if they followed social-distancing guidelines and limited Mass attendance to one-third church capacity.

Parishes also were expected to sanitize churches before and after each Mass, suspend the sign of peace, and offer Communion to communicants following the Masses with groups larger than 10.

Pastors of the 58 churches in the Diocese of Nashville, Tennessee, and their staffs have been busy planning to resume the public celebration of Masses. But that start could come on different days and in different ways, depending on the parish.

Bishop J. Mark Spalding announced May 7 that the public celebration of Masses could resume May 18. At the same time, he said, “Some pastors may prudently decide to wait a few more weeks. … We especially do not want to put anyone at undue risk from a hasty or ill-prepared reopening.”

The bishop’s dispensation from the obligation to attend Mass on Sundays and holy days will remain in effect through June 30, and he encouraged people who are not feeling well, are in vulnerable groups, or are concerned about joining public gatherings to stay home. Parishes also will continue to livestream their Masses for people to watch at home.

One parish pastor, Father Dexter Brewer of Christ the King Church in Nashville, said he has some concern about moving too fast to bring people together and the potential of putting their health at risk.

“As the doctors say, first do no harm,” he said, adding that his idea “is to have Mass outdoors.” Father Brewer, who is a vicar general of the diocese added: “That makes me feel better.”

Atlanta Archbishop Gregory J. Hartmayer May 18 issued a schedule and conditions for the resumption of in-parish worship and access to church buildings in the archdiocese. The advisory is a combination of requirements, suggestions and best practices that will be evaluated and amended as needed.

While the dispensation from the obligation to attend Sunday Mass remains in effect through Sunday, June 28, attendance at daily Mass may begin Monday, May 25 on announced schedules. Churches may also be open for prayer and adoration on an announced schedule. Weekend Masses will begin on Saturday, May 30 and Sunday, May 31‚ÄìPentecost.

In an accompanying video, Archbishop Hartmayer calls the guidelines a “measured, careful approach.” “We decided to begin our process on Pentecost — the birthday of the church,” he said. “As a theme for this reopening we pray, come Holy Spirit, fill and renew us.”

Not all dioceses are preparing for public Masses yet, however.

In Quebec, Canada, many scenarios are on the table, including outdoor Masses, liturgies of the Word, funerals presided by laypeople.

“We have an open dialogue with the government,” confirmed Msgr. Pierre Murray, general secretary of the Quebec assembly of Catholic bishops.

The Quebec Catholic Church intends to be largely inspired by the protocol reached between the Italian Episcopal Conference and the Italian government on the gradual resumption of liturgical celebrations.

Post-pandemic protocols “will have an impact on the life of parishes. The hygiene measures are likely to be permanent. On a pastoral level, the effects will be felt in the long term,” said Msgr. Murray.

Auxiliary Bishop Marc Pelchat of Quebec said the idea of changing the whole church over the last two months is illusory, but the situation offers an opportunity for reflection, he said. “A profound change takes decades,” he said. It’s been a time to stop and think about what we are doing. And to get us to do things differently.”

As many have been discussing, distribution of Communion poses a health challenge. In this regard, should we expect to one day see Communion wafers wrapped in small individual packets and distributed with tweezers?

“I hope not!” said Bishop Pelchat. “That would make them akin to an object of consumption. If health regulations prevent Communion for a certain period of time, we’ll refrain from Communion, that’s all.”

Though some parts of the Diocese of Arlington, Virginia, were allowed to celebrate public Masses again under government protocols starting May 15 — with 50% of the building capacity filled — Bishop Michael F. Burbidge said that until further notice, all the faithful are still dispensed from the obligation to attend Mass.

Those who are vulnerable or feel ill in any way were encouraged to avoid gatherings such as Mass. Many parishes will continue to livestream Mass.

In the Archdiocese of Newark, New Jersey, Cardinal Joseph W. Tobin, has settled on a phased reopening of churches. In the first phase, churches opened May 17 for private prayer. The sacrament of reconciliation can be celebrated if social distancing can be maintained and masks are worn, a statement from the diocese said.

An archdiocesan task force continues to monitor public health guidance and the recommendations of the federal and state officials, who have cautioned against a rush in reopen churches until manageable safety protocols can be put in place.

Beginning May 22, in the Diocese of Saskatoon, Saskatchewan, churches will be permitted to celebrate public Sunday and weekday Masses and to resume baptisms — all with very specific restrictions including limits on the number of people in attendance strict disinfecting protocols. This is the first phase of reopening, with more steps to be determined. A general dispensation from the Sunday obligation will remain in place

“We know the desire to return to your parishes, participate in the liturgy, and receive the Eucharist is incredibly strong,” a diocesan statement said, “but we ask that everyone approach this reopening with a patient, loving and charitable mindset.”

Contributing to this story were Michael Stechschulte in Detroit, Nichole Golden in Atlanta, Philippe Vaillancourt in Montreal, Maria Wiering in St. Paul and Andy Telli in Nashville.