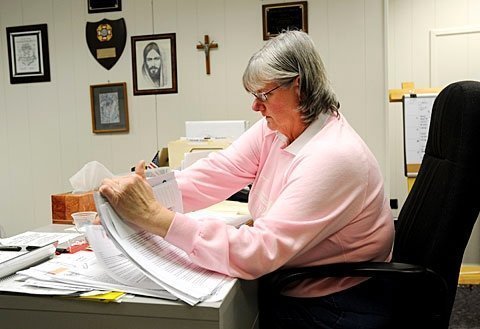 Kathy Keil, the bookkeeper for Tioga County Rural Ministry in Owego, does some paperwork March 9.

OWEGO — Many folks who rely on Tioga County Rural Ministry are overloaded with hardship and low on hope.

They can count on ample empathy from the ministry’s executive director, who’s had her own share of personal setbacks.

Yet Sister Phyllis McGuire, RSM, also is an inspiration. Now engaged in a fulfilling life of ministry, she is living proof that hard times can be overcome.

"It’s been quite a journey," remarked Sister McGuire, who will celebrate her 75th birthday on March 31. "I think when you’ve had a lot of loss in your life, you either become compassionate or very bitter. God just directed me in the right way."

Sister McGuire is a mother and grandmother as well as a woman religious. She had originally favored religious life while growing up in New Jersey, but her mother died when she was 13 and her father vetoed her future plans. Sister McGuire went on to marry and have two children. But her daughter died suddenly at age 7; along with the fallout from that devastating loss her marriage was annulled. Eventually, her vocational yearnings resurfaced.

"I kind of went back to the church that I loved so much," she said.

In 1987 she entered the Sisters of Mercy, and in 1996 — at age 60 — she made her final profession. Also that year, to fulfill her desire to perform hands-on ministry, Sister McGuire moved to Tioga County and began working at the rural ministry. In 2002 she began her current position as TCRM’s director.

These past 15 years have been spent with an outreach program that plays a vital role in serving the area’s poor. TCRM was founded in 1978 in the basement of Owego’s St. Patrick Church before moving to 60 North Ave. from 1983 to 2007. It has been located at 143 North Ave. since 2007. The Sisters of Mercy have been involved with TCRM throughout its history.

TCRM serves Tioga County residents in many ways, beginning with its onsite emergency food pantry that offers personal-care products as well. The ministry also provides financial assistance for utilities, medical expenses, gasoline, car insurance and repair, and rent. Sister McGuire said financial need in her region has been intense, remarking that TCRM’s staff has never fielded so many requests during her time there.

"The economy today is really terrible," she said, adding that employment opportunities are scant: "Quite a few young people don’t have jobs. There‘s not a lot of openings in this area."

And yet, she added, gasoline prices and rental expenses continue to soar.

"When I first came here, (average) rent was $250 and now it’s $600," she said, noting that her agency can help with a percentage of such expenses but cannot fix the entire problem: "The financial need is just outrageous here."

Other services offered by TCRM include transportation to medical appointments; home visitations to deliver groceries and other goods to elderly and shut-ins; and wheelchair ramps constructed by volunteers. According to Sister McGuire, TCRM serves approximately 300 people per month, but during the Thanksgiving and Christmas holidays that total spiked to 1,100, thanks to food baskets and gifts provided by TCRM for families, senior citizens and shut-ins.

The nonprofit ministry is supported by Tioga County’s Catholic churches and other denominations. TCRM relies on food, supplies, cash donations, grants and volunteers to help meet its 2011 operating budget of $156,000. Sister McGuire said local support is consistently outstanding, and the community returned that appreciation in 2009 when the Owego Lions Club selected Sister McGuire as its Woman of the Year.

"I do like it here. I know it’s the people," Sister McGuire said. However, she added that rural ministry involves many challenging moments as well: "It’s not an easy place to be, really." She explained that some people take advantage of TCRM’s generosity and others don’t follow up on referrals to other services and educational opportunities that would help them become self-sufficient. Sister McGuire also expressed frustration that "we’re a Band-Aid," not having the ability to turn every client’s life around.

Even so, she’s thankful for her 15 years and counting at Tioga County Rural Ministry.

In turn, Sister McGuire and her staff members pass along God’s goodness to the people they serve.

"We treat people with dignity. People say, ‘You’re nice.’ Well, of course. Why wouldn’t we be nice?" she said with a laugh.

EDITOR’S NOTE: To receive services from Tioga County Rural Ministry, or to volunteer or make a donation, call 607-687-3021.