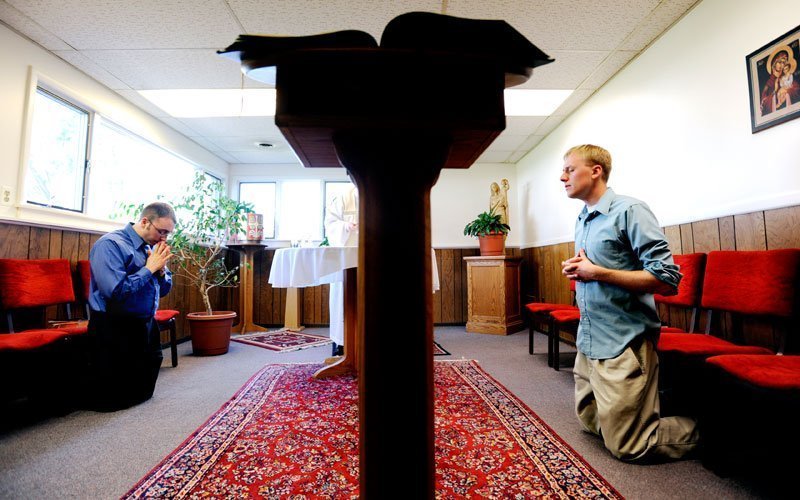 Peter Van Lieshout was in college when he told his mother he was seriously considering becoming a priest. He wasn’t sure how she’d respond, but he was more surprised by her reaction than she was by his news.

“She said she wasn’t surprised, that she thought, even when I was a little kid … that I had a vocation to the priesthood, and she never told that to me before,” recalled Van Lieshout, who will travel to Rome in July to begin his seminary studies.

He will be joined there by Greg Rupik, who had a similar experience when he told his family about his future vocation.

“When I told my parents, I think they were both a little bit surprised, but when I told my sisters that was the kicker. One of my sisters turned to my youngest sister and said, ‘I told you so,'” Rupik said.

Van Lieshout and Rupik are the newest of the Diocese of Rochester’s current crop of seminarians. One of those seminarians, transitional Deacon Brian Carpenter, currently is wrapping up his studies at Mundelein Seminary in Mundelein, Ill., and will be ordained by Bishop Matthew H. Clark at Sacred Heart Cathedral June 6.

But Deacon Carpenter will be the last priest ordained for the diocese until at least 2013, according to Carol Dady, coordinator of the diocesan Office of Priestly Vocation Awareness. Although this four-year gap between ordinations is the longest in recent years, officials say they’re hopeful that 2013 might represent a turning point in terms of the volume of priestly vocations in the Diocese of Rochester.

Five local men currently are finishing their first of four years of theology at various seminaries around the world. Two are studying at Theological College at Catholic University of America in Washington, D.C., one is at Mundelein Seminary, another is at American College at the Catholic University of Louvain in Belgium and another is at the Pontifical North American College in Rome. Seminarians also must complete a year of pastoral work at diocesan parishes in addition to their studies, so the earliest these men could be ordained is 2013, Dady said.

Rupik and Van Lieshout spent the last eight months at Becket Hall, the diocesan residence for men discerning priestly vocations. Although they’ll soon be leaving the residence to begin their seminary studies in Rome, Dady said the diocese already has received applications from four men interested in spending the next year in discernment at Becket Hall. Several other men from outside the diocese also may be considering the program, she said.

A number of societal factors probably account for the four-year gap between diocesan ordinations, said Dady and Father Tim Horan, director of the diocesan Office of Priestly Vocations Awareness. The lifelong nature of the priesthood might be scary for some young men, especially since young people today have more career options than ever before and can expect to work for several different employers during their lives, Father Horan said.

The clergy sex-abuse scandal that broke in 2002 also may have played a role in the temporary drought in priestly vocations, he added. The nation was still reeling from the scandal in 2003 and 2004, when any potential candidates for ordination in 2010 would have begun the year or two of discernment necessary before starting seminary studies.

“It was a very unpopular topic to address that a young man might consider becoming a priest, given all of the headlines that were happening at the time. I think we have suffered from huge discouragement,” Father Horan said.

The pattern of priestly vocations in the Diocese of Rochester appears to mirror national trends, according to an April 2008 report on Catholic-ministry formation enrollments from the Center for Applied Research in the Apostolate at Georgetown University. In the 2004-05 academic year only 2,307 men were studying to become priests for the dioceses in the United States, representing the smallest number of men to do so in the 40-year period covered by the report.

Yet the number of seminarians gradually has been creeping back up, the report shows. During the 2007-08 academic year 2,489 men were studying to become priests in U.S. dioceses.

The number of seminarians and men interested in discernment locally seems to indicate an uptick in vocations here, too. Dady said she believes the late Pope John Paul II is partly responsible for turning the tide and sparking a gradual growth in vocations. He often spoke to young people about the church’s need for their involvement, especially through the priesthood and religious life.

“He asked them not to be afraid if they think God may be calling them to that. I think it’s opened a lot of eyes,” Dady said.

Including those of Van Lieshout, apparently.

“The first time I really remember thinking about (the priesthood) was World Youth Day 2002, when Pope John Paul II said something about it in his homily,” he said.

Van Lieshout said he doesn’t remember exactly what the pope said that day in Toronto, but he does remember realizing the priesthood might be something he should consider.

Dady and Father Horan have been working together for the past five years to help young men who may be feeling the call and to get more people thinking about the priesthood.

“We’re trying to raise awareness of what a priestly vocation is like so that when young people are considering what they’re going to be doing with the rest of their lives, (the priesthood) is at least on the table,” Dady said.

Their office sponsors a Fisher Dinner Series, through which parishes host dinners for men interested in the priesthood. During these dinners, the potential candidates are able to share prayer and fellowship with several current priests and hear their vocational stories to learn what a priest’s life is like.

The annual “24 Hours with the Lord” is another popular event, Dady said. This retreat is usually held the night before a priestly ordination and features eucharistic adoration, the Liturgy of the Hours, and talks by Bishop Clark, priests and seminarians. The next morning the group attends the ordination together.

Earlier this year Rupik and Van Lieshout shared their stories on Rochester Diocese Roundtable, a radio show hosted by diocesan spokesman Doug Mandelaro and Jack Palvino, manager of Catholic radio station WHIC 1460-AM. Recordings of their three-part interview may be downloaded from the vocations page on the diocesan Web site, www.dor.org.

The diocesan Web site itself has been instrumental in encouraging priestly vocations, Father Horan noted. It provides a way for the diocese to provide a wealth of information to many people at once, and it also provides young men with an easy way to access this information without risking embarrassment.

“You can visit it without any cost to yourself, no psychological investment. You can purely observe and exit the Web site and be anonymous,” he said.

Diocesan officials have harnessed other Web technologies to spread the word about priestly vocations. In a June 2007 video posted on YouTube, Bishop Clark speaks directly to young men who may be feeling the Holy Spirit’s tug toward the priesthood. He shares the story of his own vocation and tells viewers he would choose this vocation again because it has led him to unimaginable blessings.

“As a priest I have been allowed to witness and participate in the workings of the Holy Spirit and the power of God’s sacraments to heal and inspire, to spark happiness and courage and hope,” Bishop Clark said in the video.

The bishop also encouraged young men to pray honestly and openly each day, and to ask God to show them his way in their lives and guide them along the right paths.

“And God will. I promise you that,” he said.

Yet one of the most effective ways of encouraging priestly vocations, doesn’t require any special technology, Father Horan observed. A simple comment from a friend, family member or priest can mean everything to a man contemplating the priesthood, he said.

A priestly vocation, like any other Christian vocation, is always a story begun by God, Father Horan said. Eventually a future priest will begin to feel the first rumblings of his vocation deep inside. He may not acknowledge God’s call right away or know what it means, and he may even try to push it away at first. Oftentimes a simple comment or suggestion from someone else is what it takes for that man to begin to acknowledge his vocation.

“That’s when you’ve got to consider the way that God’s calling you,” Father Horan said.

Rupik said his peers in high school used to jokingly ask him if he planned on becoming a priest. He assumed they were teasing because he enjoyed theology classes, but their offhand remarks still made an impression on him.

“Just those suggestions, the fact that people started to see something in me that resembled qualities they’d like to see in a priest, that got me thinking,” he said.

Once men acknowledge their callings, they often feel a sense of excitement coupled with a sense of peacefulness because they know the priesthood is what they’re meant to do, Dady said. They feel special when they realize they’ve been singled out and called by God, Father Horan said. Many of the men who become priests have had some sort of religious experience that has awakened them to Christ’s presence in their lives, he said.

“Oftentimes that makes them stronger, having recognized that they were heading down the wrong path and having the grace to redirect their life,” Father Horan said.

“If you are someone who may be considering priesthood it’s important to talk about it, whether it’s (with) your pastor or someone that you trust,” Dady said. “The first step is telling someone else what you’re thinking.”