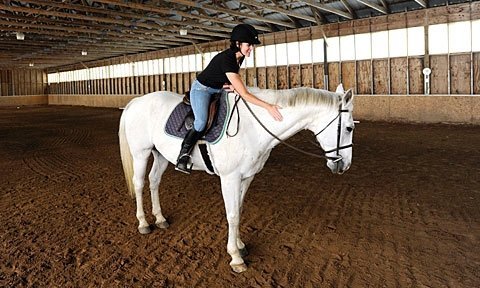 Keli DiRisio rides a horse at Maple Creek Farm in Victor June 17. DiRisio, who has multiple sclerosis, is helping to coordinate a June 26 horse show to benefit the National Multiple Sclerosis Society.

Keli DiRisio was an avid horseback rider when she was young girl, but by the time she was in college horses had taken a backseat to school and work. By the mid-1990s she’d earned bachelor’s and master’s degrees in graphic design from Rochester Institute of Technology and was well on her way to a promising career. Then she was diagnosed with multiple sclerosis in 1994.

"That was a little bit of a shock," said DiRisio, 41. "I wasn’t expecting that, so I kind of had to reprioritize things, what was so important and what wasn’t anymore."

Fast forward to the summer of 1996. DiRisio’s MS had flared up and she wasn’t feeling well, but what she most remembers from that summer was not physical pain. Rather, she felt a pang of longing as she watched riders from the United States take the team silver medal in the show-jumping competition at the Summer Olympics in Atlanta.

"I thought, ‘I miss it so much,’" recalled DiRisio, a member of St. Patrick Parish in Victor.

She hadn’t ridden in years, but that summer she realized she wasn’t sure how many more years she would be physically capable of horseback riding. She didn’t want that window of opportunity to close before she found her way back to what used to be her favorite hobby.

"I don’t want to be living with all those regrets," DiRisio explained.

She soon began horseback riding again, although the experience was a bit different than it had been when she was younger.

"When you’re a kid you’re fearless and nothing bothers you," she said. "Now that I’m an adult, I don’t bounce like I did when I was a little kid. And now I had MS, so everything was kind of an unknown."

Multiple sclerosis is a chronic disease that attacks the brain, spinal cord and optic nerves, according to the National Multiple Sclerosis Society. It is believed to be an autoimmune disease, and the symptoms — as well as their progression and severity — are unpredictable and vary from person to person. Common symptoms include numbness, paralysis or loss of vision.

Fatigue and weakness are the symptoms DiRisio most commonly feels. She knows certain triggers, such as stress and heat, will exacerbate her symptoms.

"In the summer it definitely has an impact on me. I tire pretty easily. I have to be pretty cognizant of my body and what it’s telling me," she said.

Although horseback riding is a bit more difficult now than it was in her childhood years, DiRisio said riding actually has helped her become more in tune with her body.

"You become a lot more aware of your body and how things are reacting when you’re up on a horse," DiRisio said.

It’s now been more than 15 years since DiRisio took up riding again, and she and her American quarter horse, Willy, frequently may be found jumping fences or completing sequences of dressage movements at Maple Creek Farm in Victor. DiRisio now also gives riding lessons. Her students typically are children, but she’s currently working with another woman who also has been diagnosed with MS. The two women met in the waiting room at a doctor’s office, and upon learning of DiRisio’s involvement with horses, the other woman said she’d always wanted to ride.

Eventually this woman came to the realization — as DiRisio had done several years before — that, "It’s now or never," DiRisio said, noting that riding has helped her student cope with her MS symptoms.

"I’ve been working with her and she’s just said she can already see the difference," she added.

Horseback riding is not the only thing that’s helped DiRisio gain control of her life, however. She also credits Tysabri, a medication she recently began taking, as well as the loving support of her husband, Louis, and son, Matthew. Her Catholic faith also has played a strong role, she said.

"It’s something that’s always there that I can turn to. With the unpredictability of MS, my faith certainly is there as part of what I have that at least I know is behind me, supporting me, along with my family," she said.

DiRisio also helped organize a June 26 horse show at Stoney Creek Stables, located at 6253 Brownsville Road in Farmington. A portion of the proceeds from the show were to be donated to the National Multiple Sclerosis Society. She hoped the show would not only raise money for MS research, but also raise awareness about the disease and the capabilities of the people who suffer from it.

"We can still do things and we are still ourselves," she said.

DiRisio hopes that by sharing her own story, other people with MS will be inspired to take control of their lives instead of letting the disease dictate their lives.

"That’s definitely my focus, on the decision of kind of choosing your own path," she said. "Are you just going to sit back and take it, or just keep going with whatever life throws at you and make the best of it?"