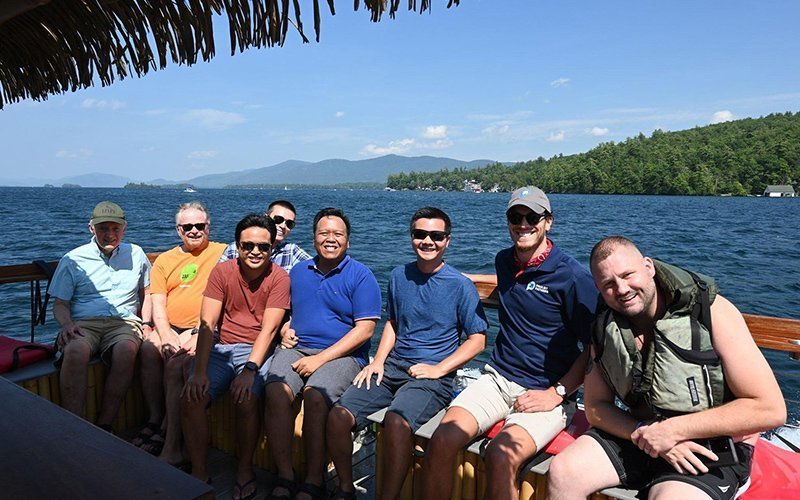 A group of priests and seminarians in New York pose for a photo on Lake George with Jimmy MacDonald, right, whom they saved from a capsized kayak Aug. 11, 2020. (CNS photo courtesy Chris Malano via Father Ronald Roberson)

Wife faces fear of swimming by keeping eyes on the cross

ALBANY, N.Y. (CNS) — This is a typical story really about Paulist Fathers, a floating Tiki bar and a kayaker.

It all started when Greg Barrett, a captain for Tiki Tours, offered the Paulist Fathers — two fathers and five seminarians — a free, relaxing tour around Lake George, which is 60 miles north of Albany, in August.

Paulist Father Frank Desiderio is the director of St. Mary’s of the Lake, the summer retreat for the fathers since 1875, and Barrett lives next door to the retreat’s housekeeper, Vicki Butz.

Barrett was talking with Butz one night on his back porch about taking the Paulist Fathers out on the boat saying, “My mother was a very devout Catholic, and I said these guys need to come out on the Tiki boat. (And a couple of months later,) the guys said, ‘Let’s go!'”

“He just wanted to give our guys a nice day, so he offered the free time slot,” Father Desiderio told The Evangelist, diocesan newspaper of Albany.

The floating Tiki bar is essentially a round barge that normally holds partiers — not priests — on the popular upstate New York lake. The seminarians and novices, who are studying at The Catholic University of America in Washington, were staying at the retreat for 10 weeks this summer to get out of the city during the pandemic.

It was a typical day on the lake with moderate chop on the water and broken clouds, said Father Desiderio, until the group noticed a man, wearing an ill-fitting life jacket, struggling to hang on to his overturned kayak after losing his paddle.

Barrett also pointed out that after he picked up the Paulist Fathers, instead of going up the west side of the lake and returning on the east side, because of the weather, he went in the opposite direction. It proved to be a fateful decision as they came across the kayaker, Jimmy MacDonald, in distress.

“I noticed his paddle, that is the first thing that caught my attention,” Barrett said. “I beeped my horn to get the guy’s attention. I thought the person at the time was not paying attention or on his phone and when we got closer, we saw the kayak flipped over and then we heard him yelling for help and we rolled over there to get him out of the water.”

Along with the deckhand, novices Chris Malano, from Hawaii, and Noah Ismael, from Maryland, helped drag MacDonald to safety.

They were very happy to be able to help,” said Father Desiderio, who added that another novice on board, Ben Chisholm, was captain of the Fordham swim team.

“The first thing I said was, ‘You are in good hands, you are with priests,'” Barrett said, “and he said, ‘I am with priests?'”

“He asked for a prayer as soon as he got on board and I said to him, ‘Are you with somebody?’ He gets on the phone and tells his wife, ‘Guess where I am at? I am on the Tiki boat,’ and he says, ‘It gets better, I am here with a bunch of priests.'”

The Paulists’ retreat has a prominent dock and boathouse and Father Desiderio said this was not the first time that they have helped people to safety or given them directions. In August, the Warren County Sheriff’s Office used the dock as a staging area in its efforts to search for a drowned swimmer.

“Once a year, we see someone in trouble,” Father Desiderio said.

Matvey is editor of The Evangelist, newspaper of the Diocese of Albany, N.Y.