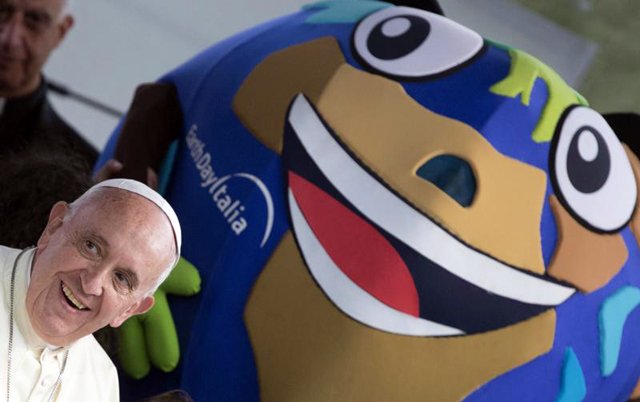 Pope Francis smiles as he attends an Earth Day celebration April 24 at Villa Borghese Garden in Rome.
By Carol Glatz
Catholic News Service
VATICAN CITY (CNS) — Dive into the world’s problems with courage and help people turn their lives of desolation into abundance and hope, Pope Francis said.
"You must take life as it comes. It’s like being the goalie in soccer — grab the ball wherever they kick it," he told people gathered in a Rome park for an Earth Day event.
"We must not be afraid of life, afraid of conflict," he said April 24, because it is only by confronting challenges head-on and together that they can be solved.
Making a surprise late afternoon visit to Rome’s Villa Borghese park, the pope spoke to more than 3,000 people attending a four-day event sponsored by the Focolare Movement and Earth Day Italy.
In conjunction with the celebration of Earth Day April 22, the Focolare Movement tried to create a "village" in the park in the center of Rome to promote ways for people to live together in friendship and solidarity and with respect for the environment.
After listening to some of the speakers talk about their experiences helping others, Pope Francis said their work was a "miracle" in which they helped transform "deserts into forests."
The arid, lifeless world of the desert can be found "in all of our hearts," in cities, on the margins of society and even in exclusive, gated communities — "it’s terrible, the desert is there, too," he said.
"But we must not be afraid to go into the desert in order to transform it into a forest," bringing about abundant life, even if it is a bit "messy."
"But that’s the way life is," he said.
The only way to understand the world’s problems — and feel compassion — is to get close to those in need, the pope said.
"It’s a risk, but it is also an opportunity, for me and for the person I draw near to."
Helping others must be "free" without expecting anything in return, he said. The Christian sense of "gratuity" is not to be forgotten "in this world where it seems if you don’t pay, you can’t live."
Instead of people being the focus of the economy and the world, "they have been driven out and we have a beautiful god, the god of money at the center" of it all, he said.
Pope Francis praised the Focolare Movement’s work in Italy to help people who are addicted to gaming machines. "In Buenos Aires, I saw elderly women who would go to the bank to cash their pension check and then immediately go to the casino," he recalled.
He asked that everyone complete "an assignment" as they return home: to notice people’s faces as they walk down the street.
Some people will look withdrawn or worried, he said. They are missing "a smile, tenderness" because they lack a kind of friendship or fellowship among people in the community.
Creating a remedy for the lack of fellowship requires the generosity, respect and courage to come together, to work out problems and to forgive, he said, no matter what people’s background or religion is. "We all have something in common; we are all human."
Copyright © 2023 Catholic News Service, Inc. All rights reserved. Linking is encouraged, but republishing or redistributing, including by framing or similar means, without the publisher's prior written permission is prohibited.