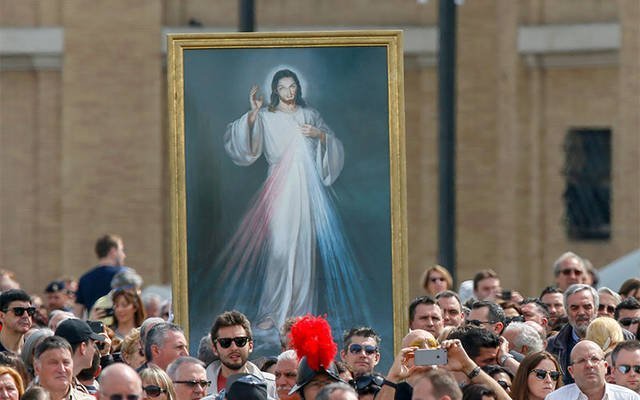 For Harriet Beiter, her involvement with the Divine Mercy Novena — an annual commitment that has now reached 25 years — is her way of honoring a special edict from Jesus.

Beiter noted that according to the diary of St. Faustina Kowalska (1905-38), Christ instructed the young Polish nun in a vision to establish a Divine Mercy devotion for the redemption of sinners. It was to be observed daily between Good Friday and the first Sunday after Easter. The popularity of St. Faustina and the Divine Mercy grew in the late 20th century, eventually spreading to the United States, and Beiter coordinated an inaugural Divine Mercy Novena in 1993 at Henrietta’s Guardian Angels Church. She has continued doing so every year since.

“It’s my ministry, really. It’s my devotion to Jesus that I’m doing this. I like to spread the word about the Divine Mercy and to encourage people to know about it,” Beiter said.

This year’s Divine Mercy Novena, which began on March 30, is taking place at 7 p.m. nightly at Guardian Angels. It will conclude on Divine Mercy Sunday, April 8, at 3 p.m. at St. Joseph Church in Rush — which, along with Guardian Angels and Henrietta’s Church of the Good Shepherd, constitute St. Marianne Cope Parish. Beiter said the novena is open to all and features Liturgy of the Hours, adoration, meditation, presentations and the Divine Mercy Chaplet — a series of prayers using the rosary.

Meanwhile, a Divine Mercy Novena also is taking place in Elmira, continuing its own 25-year tradition thanks to the efforts of longtime coordinator Rose Marie McLaughlin. The novena is being held at St. Casimir Church at 7 p.m. each evening and will end with a 3 p.m. service at the church April 8.

The novenas in Henrietta/Rush and Elmira actually predate the official establishment of Divine Mercy Sunday worldwide by St. John Paul II on April 30, 2000 — the same day he canonized St. Faustina. Since then, several more diocesan parishes have incorporated Divine Mercy into the Easter season, either through novenas or special observances on the first Sunday following Easter. For instance, in northern Tompkins County, Deacon George Kozak will conduct a Divine Mercy gathering April 8 at Lansing’s All Saints Church at 3 p.m. that will include adoration, a Divine Mercy Chaplet, a homily on the Divine Mercy, the rosary and Benediction. This is the 19th year that Deacon Kozak has coordinated a Divine Mercy Sunday service, having also held one at Ithaca’s Immaculate Conception Parish prior to his current assignment in the cluster of All Saints, Holy Cross in Dryden and St. Anthony in Groton.

In addition to Easter time, Divine Mercy devotion can take place the rest of the year in the form of weekly or monthly chaplets. The chaplet may be prayed in parishes as well as in homes; it is available online as well.

A cornerstone of Divine Mercy prayer is the image of Christ — clothed in white, with rays of red and white emanating from his heart — and the accompanying inscription “Jesus I Trust in You.” This image is based on a vision St. Faustina had of Jesus on Feb. 22, 1931. St. Faustina also wrote that Jesus promised special graces for those who practice Divine Mercy devotion. In addition, a decree in 2002 by St. John Paul II allows for plenary indulgences to be granted for adherence to the Divine Mercy.