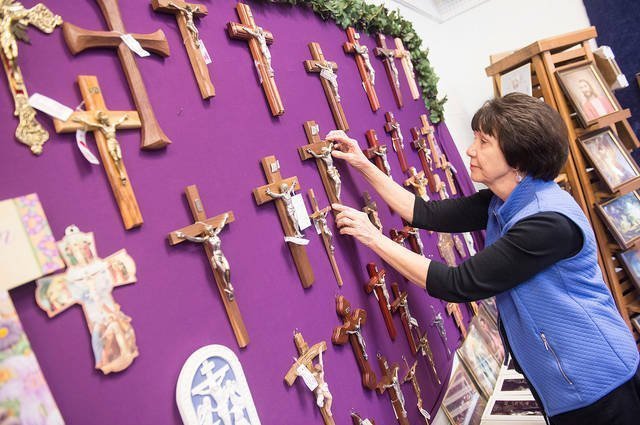 Mary Young restocks items at the Divine Mercy Shop in Spencerport. The store is located in the former St. John the Evangelist School. 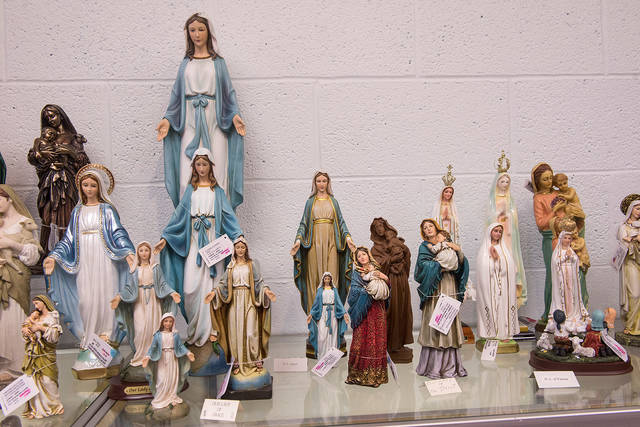 Statues of Mary are among the items for sale at the Divine Mercy Shop in Spencerport.

SPENCERPORT — The week before Christmas is a busy time in most stores, especially those that specialize in religious items. When a new religious store opens just six days before Christmas, however, those last few shopping days can become downright chaotic.

Such was the case for the Divine Mercy Religious Shop, which opened its doors in the former St. John the Evangelist School in Spencerport on Dec. 19, 2017.

“It was kind of crazy, but it was the best Christmas present,” remarked Tom DiVincenzo, CEO of the new not-for-profit corporation known as Divine Mercy Religious Shop Ministries, which operates the store with a team of more than 40 volunteers.

The Divine Mercy Religious Shop is not the first store to take up residence in the former school. The building previously housed the parish’s St. John’s Religious Shoppe for six years. That shop closed in 2016 due to management challenges facing a parish-owned, volunteer-run business.

“They weren’t able to maintain basic internal controls that we expect from all our parishes,” explained Father Daniel Condon, chancellor of the Diocese of Rochester. “It’s a fairly common problem. Generally retail operations are not part of parish activity. We have not had a lot of them.”

Several of the former store’s volunteers and customers now are involved with Divine Mercy Religious Shop Ministries, but the new entity is completely independent from both St. John the Evangelist Parish and the Diocese of Rochester. No parish staff members are involved with the shop, and the organization rents its space in the school from the parish.

The new store sells a range of products from rosaries and crucifixes to greeting cards for such sacramental occasions as baptisms, first Communions and confirmations. One room is devoted entirely to saint-related merchandise, such as statues, medals and holy cards, while the shelves of another room are lined with Bibles and books about various Catholic topics. In between those two rooms is a space filled with children’s books and DVDs — including the “Veggie Tales” series — as well as religious toys, kids’ rosaries, and baptism gifts and cards.

The shop also provides a place for Catholic parents to find resources and religious items that will help them raise their children in the faith, noted Mary Young, one of the volunteers.

“There are so many resources here that you don’t get anywhere else, except online,” added fellow volunteer Mike Flanagan, who also is a member of Divine Mercy Religious Shop Ministries’ board of directors. “If we don’t have it in stock we can usually get it, and for a better price.”

Although the store has a large inventory of merchandise, selling that merchandise is only part of its mission, said DiVincenzo, who hopes the store eventually will be able to host group meetings and lectures on Catholic topics. The store’s website, www.divinemercyreligiousshop.org, includes links to a number of other Catholic websites, and in the near future the organization hopes to establish a lending library where anyone interested will be able to access faith-related books and resources free of charge.

The aim is to ensure that a lack of funds does not prevent anyone from learning more about the Catholic faith, DiVincenzo said, noting that the library also may be attractive to non-Catholics who are interested in learning about Catholicism. A few good books recommended by caring and nonjudgmental volunteers can have a big influence on people who may be considering converting to Catholicism, DiVincenzo added.

Deacon Bill Rabjohn can attest to that influence. Raised as a Protestant, in the 1990s he was a seminarian studying to become a Protestant minister. His church-history studies brought him to the former St. John’s Religious Shoppe, where a volunteer suggested a series of books she thought he might enjoy. After devouring each book and returning to the shop for more recommendations, he eventually discerned a desire to convert to Catholicism.

“It was God that did it, but the seed was planted there. That was my first connection with Catholicism,” recalled Deacon Rabjohn, St. John’s pastoral associate.