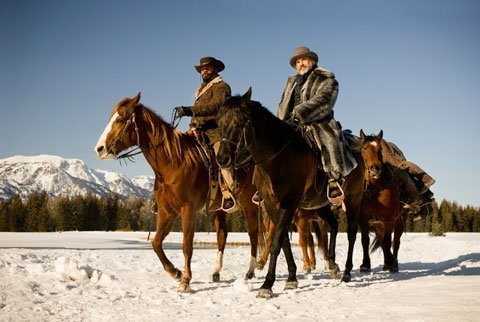 NEW YORK (CNS) — A hyper-violent Quentin Tarantino revenge film, "Django Unchained" (Weinstein), seems ill-timed at best in the wake of the Dec. 14 massacre of schoolchildren in Newtown, Conn. But here it is all the same.

As in most movies that Tarantino both writes and directs, the violence is by rote. Characters die by a single gunshot with a little splatter, their demise as tightly choreographed — with the help of computer-generated special effects — as a routine by the Radio City Rockettes.

Tarantino also takes great pains to construct his story of pre-Civil War slavery so that only those participating in, and profiting from, that evil enterprise are killed.

Jamie Foxx plays the titular character, a brutalized victim of America’s "peculiar institution." Django’s fortunes take a turn for the better when he is bought — and eventually freed — by Dr. King Schultz (Christoph Waltz), a German-born dentist who has found more profit in bounty hunting.

Schultz is a crack shot, and always has the court orders he needs to immunize his violence. The reward money for the criminals he pursues is in the thousands of dollars. And, since the bounties are offered on a "dead or alive" basis, he always brings his captives back as corpses.

Schultz is touched to find that Django has a wife, Broomhilda (Kerry Washington), who was sold away from him. She’s named after the German mythological goddess Brunhilde, and speaks German as well.

Together, Django and Schultz conspire to rescue Broomhilda from her current owner, Mississippi planter Calvin Candie (Leonardo DiCaprio). But Candie learns what the two are planning through the treachery of his obsequious, foul-mouthed butler, Stephen (Samuel L. Jackson).

Tarantino unleashes the same over-the-top attacks against Candie and his ilk as he previously launched against Nazis in his 2009 historical wish-fulfillment fantasy "Inglourious Basterds." Incongruously, though, he also incorporates satiric shtick reminiscent of Mel Brooks’ 1974 comedy "Blazing Saddles."

Thus, at one point, Django and Schultz are pursued by hooded men on horseback who form a crypto-Ku Klux Klan. But the chase quickly loses momentum when the disguised men complain that they can’t see well out of their eyeholes.

Tarantino also evidently finds it quite funny when 19th-century characters swear, and do so with contemporary expressions. The use of the N-word in the dialogue has been clocked at 110 appearances. But at that frequency, it loses all impact.

Explosives as well as bullets are deployed, apparently in homage to the dynamite tossed by John Wayne’s character in "Rio Bravo," a 1959 Western Tarantino has long identified as his favorite film.

In pre-emptive justification of his protagonist’s rampage, Tarantino depicts the horrific physical degradations of chattel slavery with careful attention to historical detail — and without much prurience.

The inhumanities depicted include whippings, the use of chains and other restraining devices, the branding of escapees, confinement in outdoor "hot boxes" and threats of castration. Worst of all, perhaps, is the fate of a slave torn apart by dogs.

While it thus offers a stark reminder of the sins wrought by racism, this is not a picture for the casual moviegoer or the easily jarred.