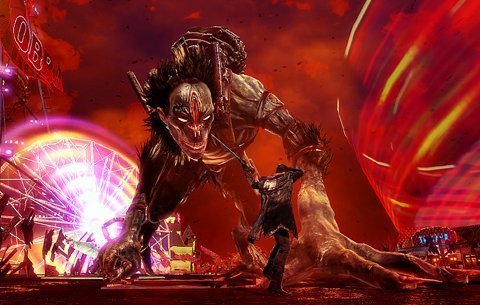 If that sounds like a morally intriguing premise, it is. But the level of violence that accompanies Dante’s struggles is so excessive that ethical considerations are wholly submerged. So too, unfortunately, are the game’s aesthetic assets — superior animation and realistic visual surroundings principal among them.

Blessed, or perhaps cursed, by his status as a hybrid Nephilim — half-angel, half-demon — Dante enters into Limbo to combat King Mundus and his proliferation of devilish agents.

Mundus uses a trio of weapons to uphold his global power:

Through debt, he controls the world’s nations, enslaving them in the never-ending quest for more money and resources.

Via a news monopoly, he ensures that Earth’s populace is brainwashed with information of his choosing.

Once captive under the twin yoke of indebtedness and the inability to obtain true knowledge, humanity predictably falls victim to Mundus’ third means of attack: virility, a mass-produced soda that sedates the public’s conscience.

To defeat Mundus, Dante must transform himself from a careless, renegade youth into a mature, purpose-driven adult committed to the pursuit of justice and peace. His quest thus takes on the basic qualities of a conversion story.

The contest between this emerging hero, with his complex moral heritage, and a villain who employs the real-world wiles of materialism, falsehood and indifference might have made for a thought-provoking experience, especially for faith-founded players. Instead, the gameplay is so blood-soaked as to preclude endorsement for any age.

Played for review on the Xbox 360; also available for PlayStation 3 and Microsoft Windows.