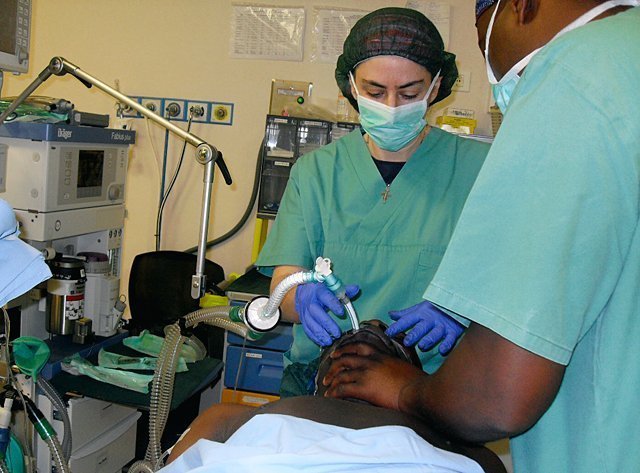 Dr. Ellen Dailor, a cardiac anesthesiologist at the University of Rochester Medical Center, assists with a surgery earlier this year in Cameroon.

ROCHESTER — While growing up, Ellen Dailor was inspired by the example of Blessed Mother Teresa — "She was my hero" — yet never foresaw herself performing the same kind of service.

"I only thought that to be a missionary, you had to be a sister or a priest," she recalled, saying that in college she began discovering ways to mesh career aspirations with the missionary spirit of her Catholic faith.

In recent years, that combination has become a way of life for the 46-year-old medical doctor.

Dailor, a cardiac anesthesiologist at the University of Rochester Medical Center, logged a nearly seven-week trip earlier this year to Cameroon. It marked her seventh volunteer visit to the West African country, where she worked with other missionaries and a local medical team to perform desperately needed heart surgeries.

During her travels, which occurred from late January to mid-March, Dailor provided anesthesia for patients at the Cardiac Centre at St. Elizabeth Catholic General Hospital Shisong, located in the Cameroonian city of Kumbo. She worked in conjunction with the Cameroon Tertiary Sisters of St. Francis, the Mission Doctors Association and the Franciscan Mission Outreach.

Dailor noted that a large percentage of her patients are young people with rheumatic heart disease caused by strep throat. She said this condition is uncommon in Western countries, where strep is treated with antibiotics before it worsens — yet such medicine is not readily available in Cameroon. There, she said, residents live largely on subsistence farming and have a median income of just over $1,000 per year. Due to inadequate health-care coverage, 80 percent of her patients require financial sponsorships in order to obtain surgeries.

"Most of the patients we operate on are at the point that they require surgery in order to survive," Dailor said, adding that it’s difficult for her to witness such a high level of children in poor health.

"So young," she said softly. "Sometimes they’re not even teenagers."

On the positive end, Dailor said she’s glad to play a part in bettering these people’s lives. She’s been performing missionary service since 2001 and has intensified her efforts in recent years, particularly the Cameroon trips that began in 2010 and included a six-month stay from late 2013 to early 2014, as well as two visits in 2015 and her most recent tour.

She plans to continue ministering in Cameroon, even though all her work abroad is on a volunteer basis and has even meant dropping to part-time status on occasion at UR Medical Center. Dailor shrugs off her considerable financial and time sacrifices, noting that she already makes a high enough salary and her expenses in Cameroon are covered.

"And God is good. I really think that if you’re called to do something, God will cover that. I believe that God takes care of the things he calls us to do," said Dailor, who grew up in St. Joseph Parish in Penfield. She is currently a parishioner in St. Marianne Cope Parish, where she attends St. Joseph Church in Rush.

Dailor said she’s been aware since an early age of the importance of serving the poor, and "this is what God has cobbled together for me." She added that she embraces her many opportunities to assist patients both at UR Medical Center and as a volunteer, remarking, "I love what I do. I’m blessed to have a profession that is interesting and challenging and helpful."

Dailor encourages more people to find out about missionary duty. Yet she also emphasized that God’s call can be answered in a variety of ways — whether that be through volunteerism, being a devoted spouse or parent, or attending church more frequently.

"Once you are open to receiving God’s grace, then you’re open to the details," she said. "What we are called to do is say yes to God. Until we are willing to say yes, we can’t know what he is calling us to do."