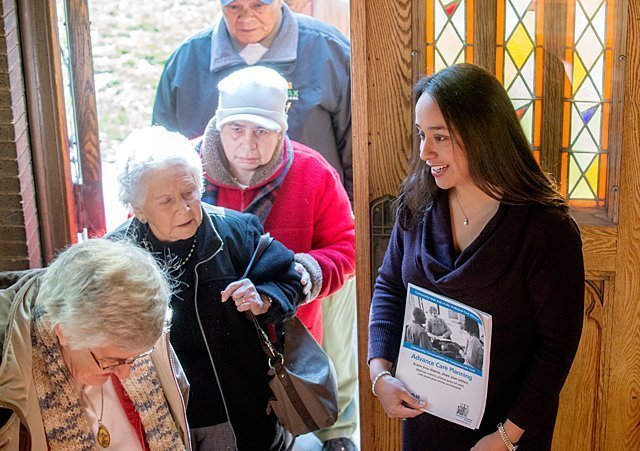 URMC resident Dr. Marielena Velez de Brown greets parishioners of Rochester’s Our Lady of the Americas church before a Feb. 7 Mass. Dr. Velez conducted survey’s following the Mass as part of her master’s thesis on advanced-care directives.
ROCHESTER — A University of Rochester Medical Center resident is working with local churches and groups to educate more people about the need to talk with family about their health-care wishes in the event of a serious illness or injury.
Dr. Marielena Vélez de Brown visited an English as a second language class at Ibero-American Action League last month to walk participants through a survey that she is conducting through the end of February as part of her efforts specifically targeted at minority populations.
She said that she is aware of some reasons why Latinos and African-Americans don’t discuss or create end-of-life directives — Latinos due to religious beliefs and African-Americans due to mistrust of the science and medical communities — but wants to investigate other factors.
"It’s important to address this issue," Vélez de Brown told the 11 participants in Ibero’s ESL class on Jan. 29.
In addition to her stop at Ibero, she also plans to visit the three St. Frances Xavier Cabrini Parish worship sites and has conducted workshops in several churches of other denominations, Vélez de Brown said. The information she collects will be part of her master’s thesis in public health as a second-year resident in the URMC’s public health and preventive medicine program.
Her work also is an expansion of an initiative created five years ago by Excellus, Ibero and The Community Place to ensure more Latinos have end-of-life health-care directives in place. Such directives give patients a say in decisions regarding their medical treatment, even if they are too sick to make those decisions themselves.
"We want you to be thinking about this now, while you’re healthy," she told parishioners following the Feb. 7 Mass at Our Lady of the Americas Church.
Latino, African-American and lower-income families in the community need to discuss such directives to reach similar levels of participation as people who are white and earn higher incomes, she added. While the goal for medical professionals is to have as many people communitywide make their end-of-life wishes known, the survey will provide more concrete information as to how minorities have or have not heard about this issue and what reasons have kept them from creating directives. Once the surveys are complete, she will analyze the data to develop strategies to overcome the barriers she finds and help more people complete their directives, Vélez de Brown added.
Eva Torres, who moved to Rochester from Humacao, Puerto Rico, six months ago, said that she has not discussed the issue of advance directives with her mother back home. Her mother simply has said that she has paid for her funeral and let Torres know where to find that paperwork, she added.
After hearing Vélez de Brown’s Jan. 29 presentation, Torres said that she realizes she needs to sit down with her mother and brother to talk about what her mother would want in the event that they need to decide whether "heroic measures" would be taken to keep her alive. Such measures would include cardiac resuscitation.
"Someone has to make the call," Torres said. "It is better to know what she really wants regarding this issue."
Conversations with family members is the first step, noted Vélez de Brown. She also noted that documenting family members’ wishes is simple and only requires filling out forms to designate a health-care proxy, or spokesperson, and a living will to spell out one’s end-of-life wishes.
A health-care proxy — who doesn’t have to be a relative — is a trusted person appointed to make health-care decisions on an individual’s behalf in the event the individual becomes incapacitated, explained Vélez de Brown. A living will outlines a person’s wishes about such matters as artificial respiration, cardiac resuscitation and pain management in a health crisis, she added.
An attorney is not required to complete these forms, Vélez de Brown pointed out. The forms do need to be signed in the presence of witnesses who also sign the paperwork, she said.
Vélez de Brown urged the ESL class participants Jan. 29 to not delay in making advance-care decisions and placing their completed forms on file with their doctors before a crisis hits. Advance-care directives also help avoid the kinds of emotionally charged scenes that she has witnessed because families failed to talk about these matters, she added.
"We have seen so many fights at the hospital. One child (of a patient) says one thing. Another child says something different," she explained. "The most tight-knit families can fall apart. … All of that can be avoided by talking with your families."
Copyright © 2023 Rochester Catholic Press Association, Inc. All rights reserved. Linking is encouraged, but republishing or redistributing, including by framing or similar means, without the publisher's prior written permission is prohibited.