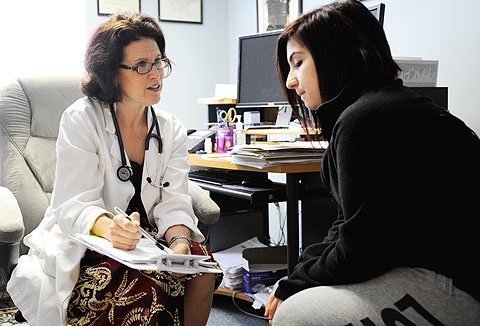 Long before she set up the office of Caritas Family Medicine on East Avenue in Rochester, Dr. Elissa Sanchez-Speach was faced with a big decision: how to run her business as a family-practice doctor.

During her medical residency following medical school she had decided that she would not provide services that go against her Catholic faith.

Yet on occasion, that decision means Dr. Speach must turn away patients seeking services she does not provide, or make them aware of services she does offer, such as natural family planning for married couples.

If a woman comes to her for an abortion referral or a prescription for artificial contraception, for example — or an unmarried man seeks treatment for erectile dysfunction — Dr. Speach informs the patient that she is unable to provide the desired treatment because of her beliefs, knowing full well that she may lose the patient as a result.

"I have a small primary-care practice, and I know my patients well," said Dr. Speach, who notes many of her patients come from the pro-life community. "By the time (a request for such services) comes up, it’s not so much of an issue."

For the most part, she said, people have been surprised about the rules of her practice, but most have said they respect the strength of her convictions. Dr. Speach said she can’t recall any patient in the four years of her practice who responded very negatively to her position.

"I do try to treat all my patients with true charity," Dr. Speach said.

Yet she worries that government regulations — or the lack thereof — at the federal and state levels could strip her of the freedom to practice medicine in accordance with her beliefs.

Soon she will be able to turn for moral support to like-minded local medical professionals who are forming a new group in the Diocese of Rochester: the Finger Lakes Guild of the national Catholic Medical Association, which is intended to offer education, socialization and support for medical professionals trying to live out their faith at work.

Final approvals of the local affiliate from the national association and from the Diocese of Rochester are expected soon, said Jean Baric-Parker, secretary of the group. Baric-Parker was one of the founding members and the person who initially called for its organization in the diocese.

Baric-Parker — who has a master’s degree in theology with a concentration in bioethics, and a work history that includes a decade in dental research — said advances in medical technology have blurred formerly clear moral boundaries. She cited as an example the moral quandary wrought by current research into creating an artificial uterus that could nurture an embryo either inside or outside a person’s body. Though such research has yielded limited results, some have theorized it could allow women without uteruses to become pregnant, possibly enable men to get pregnant, or allow cloned embryos to be raised outside a person’s body.

"The nature of health care has changed so much, and so much of it is creeping up to those moral boundaries that were unheard of years ago," Baric-Parker said.

Dr. Speach, vice president of the new guild, said she wanted to get involved in the group because of her concerns about potential federal and state restrictions on the conscience rights of medical professionals. She said she also is concerned about the implications of regulations related to the 2010 Affordable Care Act, including a mandate from the federal Department of Health and Human Services (HHS) that artificial contraception, abortifacients and sterilizations must be covered by insurance companies and considered part of preventive women’s health care.

According to HHS, existing federal conscience protections are focused primarily on ensuring that health-care professionals cannot be forced to perform, pay for or refer for abortions.

The 1973 "Church amendment" to the Federal Public Service Act, for instance, ensures that hospitals or individuals that receive federal funds are not required to participate in abortion or sterilization, and prevents hospitals from forcing employees to perform those services as a condition of employment. Conscience protections focused on abortions also were built into parts of the 1996 Public Health Service Act, the 2004 Hyde/Weldon Conscience Protection Amendment and the 2010 Affordable Care Act.

Yet Catholic officials point out that these conscience protections fail to address the many other ethical situations health-care providers may face. Regulations protecting health-care professionals’ rights to refuse to participate in care they deemed ethically, morally or religiously objectionable were put into place in December 2008, during the final days of President George W. Bush’s tenure.

These regulations protected providers who declined to provide artificial contraception, abortifacients, artificial insemination, abortions and sterilizations, certain types of end-of-life care, withdrawal of care, and certain care to unmarried people or gays and lesbians. In 2011, HHS under the Obama administration stripped away these regulations, calling them "overly broad."

Similarly, few rules at the state level protect health-care workers who have issues of conscience, said Kathy Gallagher, director of pro-life activities for the New York State Catholic Conference, which represents the state’s bishops in matters of public policy.

"There is a very strong civil rights law in New York state that protects health-care workers who do not want to perform abortion," Gallagher said. "That law has been litigated and upheld."

Yet Gallagher said the state Catholic conference has been unsuccessful in its efforts to pass legislation that would provide stronger conscience protections covering a broader array of health-care professionals.

In the absence of comprehensive protections, medical professionals said they attempt to resolve issues on a case-by-case basis.

End-of-life issues pose most of the ethical challenges faced by Dr. John Sullivan, a physician with the Pediatric Intensive Care Unit at Golisano Children’s Hospital at Strong and associate professor of clinical pediatrics at the University of Rochester Medical Center, who said he is able to transfer a patient’s care to colleagues if he cannot otherwise resolve an ethically challenging situation.

He said he has struggled with ethical dilemmas a few times as families either requested a certain therapy or no therapy at all. Yet in each situation, circumstances changed, resolving the issue without his intervention, said Dr. Sullivan, who is president of the new medical guild.

Citing as an example the possibility of government initiatives encouraging hospitals to increase their rates of organ donation, Dr. Sullivan said he is concerned that new health-care regulations could generate additional ethical concerns. He wondered, for example, whether regulations that might be intended to increase the rate of organ donation could discourage hospitals from providing families with adequate informed consent about their loved ones’ care.

In addition to the ethical challenges posed by technological advances and shifting regulation, he said he also has noticed a movement away from a universal system of bioethics in our increasingly secularized society.

"Unfortunately, with the secular world not having all the answers for the struggles of the human condition, you (the medical professional) are forced to become your own philosopher," Dr. Sullivan said.

Dr. Sullivan said he is guided by his informed conscience when he has to make a tough decision, yet said many people mistakenly believe that acting according to one’s conscience simply means doing what one feels is right. Instead, he noted, Catholic conscience formation is based on church teachings, systematic prayer and reflection.

The Catechism of the Catholic Church notes that this process is a lifelong task that ultimately guarantees freedom and instills a peace of heart.

"When he listens to his conscience, the prudent man can hear God speaking," the catechism states.

EDITOR’S NOTE: The Catholic Medical Association’s Finger Lakes Guild is open to all in the Diocese of Rochester, including doctors, nurses, physicians assistants, technicians, chaplains and social workers. To join, one must first become a member of the national Catholic Medical Association, and specify association with the Finger Lakes Guild. For more information on the national body, visit www.cathmed.org or call 484-270-8002. For more details on the local group, call 585-328-3210.