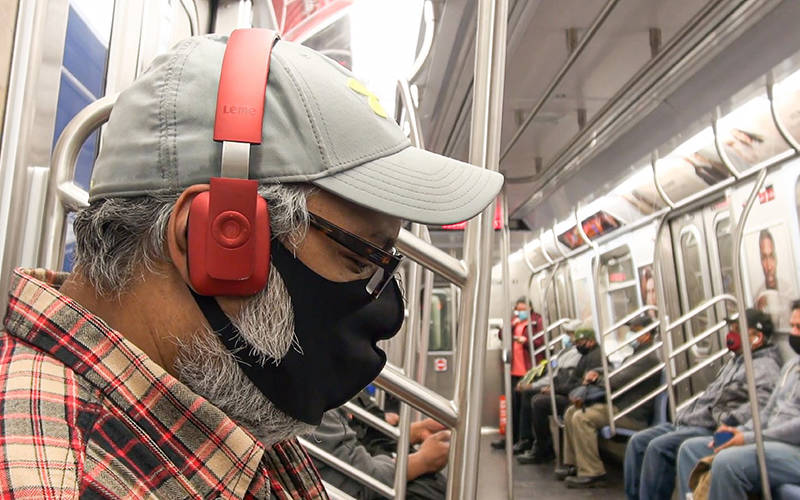 This is an image for “COVID Diaries NYC” premiering March 9, 2021, on HBO. (CNS photo courtesy HBO)

NEW YORK (CNS) — A widespread generalization holds that young adults, believing themselves to be invincible, have failed to take the pandemic as seriously as they should.

With “COVID Diaries NYC,” five youthful filmmakers, whose ages range from 17 to 21, set out to upend that notion.

Although uneven, the documentary offers more than its fair share of compelling, memorable moments and will, accordingly, powerfully engage its audience. It premieres on HBO Tuesday, March 9, 9–10 p.m. EST.

Along with its obviously mature central topic, the film deals with themes of mental illness, vandalism, racial injustice, social protest as well as the plight of immigrants lacking legal papers. It also contains a fair amount of rough language.

Although realistic, in light of the context, this verbal vulgarity makes the program best for adults. Still, given the age group of those behind its production, at least some parents may consider the show a valuable viewing experience for older teens.

Their cinema verite-style narrative unfolds in the spring of 2020 when their home town was the national epicenter of the pandemic. Within a span of three months, more than 200,000 residents of the city were diagnosed with COVID-19 and over 18,500 died from it.

The filmmakers use their parents’ experiences — some as front-line workers — as a prism through which to view the disease. Thus intimate family dramas take on a wider significance as fear of the potentially fatal illness contends for attention with the economic struggles its advent has only worsened.

All this plays out, moreover, against the turmoil provoked by the death of George Floyd while in the custody of Minneapolis police officers.

Fleming and Guallpa’s vignettes will likely make the strongest impression on viewers. 16-year-old Fleming lives in Manhattan’s Stuyvesant Town complex with his father, the former manager of a recently closed restaurant, and his mom, an elementary school teacher who faces being furloughed.

When Fleming’s mother loses her job, the family retreats to the small Wisconsin town where his dad was raised. Yet, as the filmmaker acknowledges, “we’ve traveled halfway across the country to escape our problems, but they’ve followed us pretty close behind.” A lingering shot of Fleming’s mom covering her face with her hands eloquently symbolizes the toll the pandemic has taken.

To the north of Stuyvesant Town, ambulance sirens haunt Guallpa’s Washington Heights neighborhood, where the Latina lives with her bus-driver father and her mom, a home health care aide. Mask-less riders put Dad at risk. Yet, he says, “if I don’t pay the rent, we are in the street. I don’t care that my life is in danger.”

Catholic viewers in particular will appreciate the devotion Guallpa’s father shows toward Our Lady of Guadalupe — to whom he prays before each shift.

Unfortunately, the film’s other segments are too fragmentary to resonate with viewers the way these two do. And the callow documentarians’ lack of rigor and precision sometimes undermines the movie’s impact.

Speaking about the Blackstone Group, which purchased Stuyvesant Town in 2015, for instance, Fleming says its buildings are “owned by some of the most evil people in the world.”

The corporation’s questionable late fees and rent increases — which have prompted a number of low-income residents to quit their homes — certainly open it up to legitimate criticism. A more nuanced, properly contextualized commentary, however, would have gone farther in eliciting audience concern than such a sweeping condemnation.

At its best, nonetheless, this collaboration of promising filmmakers vividly portrays COVID-19’s potentially disastrous impact on those already living on the economic edge. As federal and other lawmakers debate how to respond to the pandemic, viewers will appreciate this insightful look at the manifold problems requiring remedy.