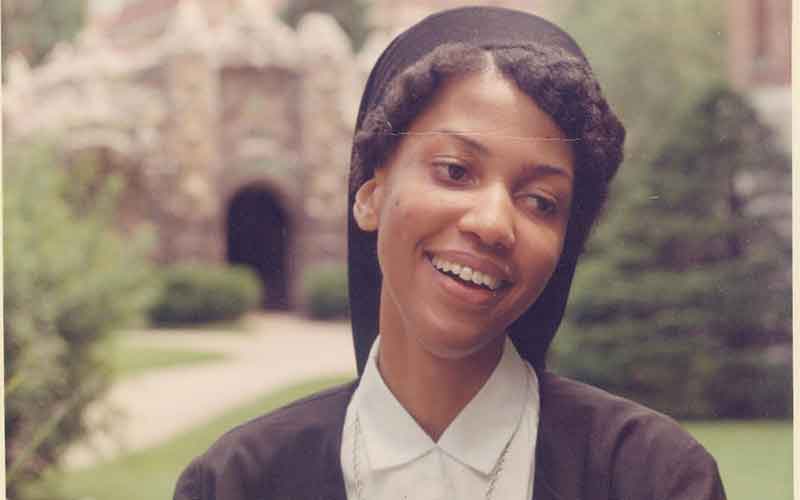 Archival photo of Franciscan Sister Thea Bowman, the subject of the documentary “Going Home Like a Shooting Star.” (Courtesy of FSPA Archives)

NEW YORK – The vigorous faith of its subject enlivens the documentary “Going Home Like a Shooting Star: Thea Bowman’s Journey to Sainthood.” This profile of the celebrated Franciscan nun, who died in 1990, aged only 52, will begin airing on ABC stations Sunday, Oct. 2 (check local listings).

Written and produced by another Franciscan religious, Sister Judith Ann Zielinski, the hour-long film is a presentation of the Interfaith Broadcasting Commission. It’s narrated by M. Shawn Copeland, professor emerita of systematic theology at Boston College.

The child of a doctor and a teacher, Bowman was raised in Canton, Mississippi, where she and her parents attended a variety of Protestant churches. After becoming a student at Canton’s Holy Child Jesus school, however, 9-year-old Bertha, as she was originally called, decided to embrace Catholicism.

Six years later, she went further. Impressed by the example of her teachers, she resolved to join their order, the Franciscan Sisters of Perpetual Adoration. When her parents opposed the idea, she staged a hunger strike.

An advocate for racial harmony

The movie features archival footage and re-enactments directed by Christopher Salvador as it traces Sister Thea’s novitiate in La Crosse, Wisconsin, her career as, first, a teacher and then a professor of English literature and her appointment by Bishop Joseph B. Brunini of Jackson, Mississippi, to head his diocese’s newly-formed Office of Intercultural Awareness.

Launched on a career as an advocate for racial harmony, Sister Thea began to travel indefatigably, spreading her message not only with lively speeches but by the use of her beautiful singing voice. Though her rise to prominence included a memorable appearance on CBS’ “60 Minutes,” she was also forced to battle illness after she was diagnosed with breast cancer.

A potential patron saint of the ebullient, Sister Thea’s infectious verve will inspire viewers. Yet at least two important topics are dealt with in the script in a way that might have been clearer. The first concerns her formation as a novice.

It’s hardly surprising that Sister Thea encountered difficulties while training for membership in an otherwise all-white community in the 1950s. But the narrative fails to distinguish between an assumed effort to suppress aspects of Sister Thea’s personality that reflected her racial heritage and the legitimate discipline that may have been imposed on her – as well as all others.

Secondly, the narrative notes that Sister Thea chafed under a rule forbidding women to preach. What is not made clear is that the canon law in question deals only with the exposition of Scripture within the context of the Mass and applies to laymen as well as their female counterparts.

Still, these are small blemishes. Taking the larger view, the opportunity to spend time in Sister Thea’s company – as well as that of those who befriended, supported and appreciated her, many of whom are interviewed – is one that should not be missed.