Does ‘The Twelve Days of Christmas’ have a deeper meaning? - Catholic Courier 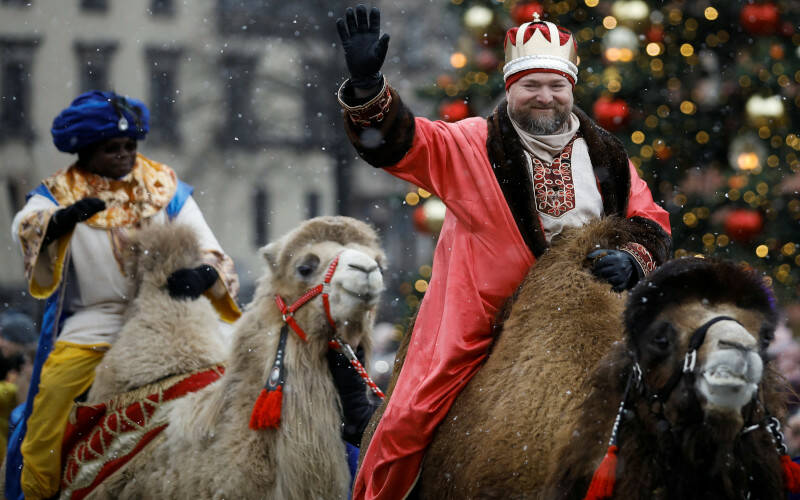 Participants wearing king costumes ride camels during the Three Kings Cavalcade parade in Warsaw, Poland, Jan. 6 in celebration of the Epiphany, also known as the 12th and final day of Christmas. (CNS photo by Kacper Pempel/Reuters)

LITTLE ROCK, Ark. (CNS) — There are birds — lots of birds — gold rings, milking maids, dancing ladies, leaping lords, pipers and drummers, but is there a deeper meaning behind the gifts received in “The Twelve Days of Christmas?”

The song dates to 1714 Newcastle, England, according to the 1864 book Songs of the Nativity by William Henry Husk.

It recalls gifts the singer’s “true love” gave them over the course of the 12-day Christmas season, Dec. 25 through Jan. 5, Twelfth Night (defined by the Oxford English Dictionary as “the evening of Jan. 5, the day before Epiphany”), which traditionally marks the end of Christmas celebrations.

For many, the cumulative song is simply a fun Christmas carol.

But in 1979, English teacher and hymnologist Hugh D. McKellar of Canada wrote a short article, “How to Decode the Twelve Days of Christmas,” in which he theorized the song’s lyrics were intended to help teach the catechism of the Catholic Church following the Protestant Reformation when Catholicism was outlawed in England from 1558 through 1829, except during the reign of the Catholic James II (1685-88).

According to McKellar, each gift had a correlation to the church:

— The true love refers to God.

— The partridge in a pear tree was Jesus Christ.

— The two turtle doves were the Old and New Testaments.

— The three French hens stood for faith, hope and love.

— The four calling birds were the four gospels of Matthew, Mark, Luke and John.

— The five golden rings recalled the Torah or Law, the first five books of the Old Testament.

— The six geese a laying stood for the six days of creation.

— The seven swans a swimming represented the gifts of the Holy Spirit — prophecy, serving, teaching, exhortation, contribution, leadership and mercy.

— The eight maids a milking were the Eight Beatitudes.

— The 10 lords a leaping were the Ten Commandments.

— The 11 pipers piping stood for the 11 faithful disciples.

— And the 12 drummers drumming symbolized the 12 points of belief in the Apostles’ Creed.

Three years after McKeller published his article, a Catholic priest, Father Hal Stockert, picked up his idea and used it as the basis for an article he wrote in 1982 and posted online in 1995.

It is an interesting theory, but, unfortunately, McKellar provided no historical evidence to tie his thoughts to the historical record.

In fact, Snopes.com, a website that reviews stories of unknown or questionable origin, said the hypothesis that the song hides the Catholic catechism is incorrect.

David Mikkelson, author of the Snopes article, wrote: “Although Catholics and Anglicans used different English translations of the Bible (Douai-Reims and the King James version, respectively), all of the religious tenets supposedly preserved by the song ‘The Twelve Days of Christmas’ (with the possible exception of the number of sacraments) were shared by Catholics and Anglicans alike.

“There was absolutely no reason why any Catholic would have to hide his knowledge of any of the concepts supposedly symbolized in ‘The Twelve Days of Christmas,’ because these were basic articles of faith common to all denominations of Christianity.”

“None of these items,” he added, “would distinguish a Catholic from a Protestant, and therefore none of them needed to be ‘secretly’ encoded into song.”

“The catechism interpretation is preposterous because the scheme wouldn’t work in a Protestant country,” he said. “The song could function as a Christian subterfuge only in a non-Christian context or country, not in Protestant England.

“English Protestants would be teaching their children the same Christian truths as Catholics, so the use of this song would not tell you whether a family were Protestant or Catholic.”

Mikkelson said the carol most likely started in France and cites the 1780 children’s book Mirth Without Mischief that says the song was a Twelfth Night “memory-and-forfeits” game in which the song leader recited a verse.

Father Andrew Hart, theological consultant to Arkansas Catholic, newspaper of the Diocese of Little Rock, said the 12 days of Christmas is more a cultural rather than an ecclesial or liturgical tradition.

“In the liturgical calendar of the Latin Church, the octave of Christmas begins on Dec. 25, Christmas Day, and continues for eight days following,” said the priest, who is adjutant judicial vicar for the diocesan tribunal.

“Octaves are eight-day periods of celebration and rejoicing for the most important feasts of the church, Christmas Day and Easter Sunday, but there used to be many more,” he added.

The 12-day period that is culturally significant could have its origins in a decree from a meeting of bishops in Tours, France, in 567, which stated the Christmas season was to extend from Dec. 25 until Jan. 6, Father Hart said.

Father Kodell said Epiphany is the older feast than Christmas, and in the Eastern Church and some parts of the Western Church it is the dominant feast of this season.