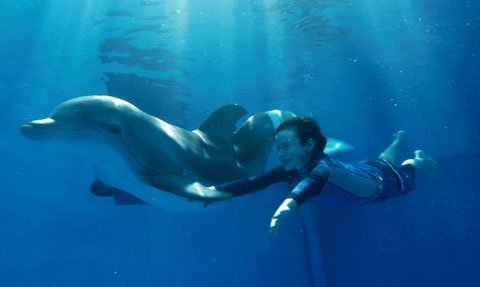 NEW YORK (CNS) — Cross "Flipper" with "Rocky" and you get "Dolphin Tale" (Warner Bros.), an inspirational film about a perky mammal who, against mighty odds, overcomes her disability with the support of her loyal human friends.

Based on a true story, "Dolphin Tale" has a refreshing motto for a Hollywood film — "Family is Forever" — and sends a rare but powerful pro-life message in its respect for persons — and animals — who are physically challenged.

Sawyer (Nathan Gamble) is 11 years old and depressed. He misses his dad, who has abandoned his mom, Lorraine (Ashley Judd). He’s also upset that his champion swimmer of a cousin, Kyle (Austin Stowell), a big brother to him, is also leaving, having enlisted in the Army.

Cycling to summer school one bright Florida morning, Sawyer sees a female dolphin in distress on the beach, tangled in a fishing trap. He frees the badly hurt animal, their eyes meet and an unusual friendship is forged.

His new pal is transported to the Clearwater Marine Hospital, run by Dr. Clay Haskett (Harry Connick Jr.) and his father, Reed (a grizzled Kris Kristofferson), with a little help from Clay’s young daughter, Hazel (Cozi Zuehlsdorff). Hazel christens the dolphin "Winter," but her discontent grows when Clay is forced to amputate Winter’s severely injured tail.

No dolphin has ever survived without a tail, its only means of propulsion. Winter’s sorry tale — make that tail — unites her new human "family" and transforms a sullen Sawyer into an action hero.

"I’m seeing something a mother dreams of — a turned-on kid," Lorraine says. "He’s so engaged, and it’s not with a Game Boy."

Winter’s not the only one in trouble. Kyle returns from war, badly injured. He may never walk, let alone swim, again. When Sawyer visits him in the veterans’ hospital, he marvels at the wounded soldiers and their recovery, thanks to some space-age prosthetics designed by Dr. Cameron McCarthy (Morgan Freeman).

Could the good doctor also work his magic on a dolphin’s tail? "Just because you’re hurt doesn’t mean you’re broken," McCarthy says, as he takes up the challenge.

Directed by Charles Martin Smith ("Air Bud"), "Dolphin Tale" is that rare family-friendly film that is wholesome and fun, while offering lessons in faith, perseverance, and respect for those who are physically challenged. The Catholic News Service classification is A-I — general patronage. The Motion Picture Association of America rating is PG — parental guidance suggested. Some material may not be suitable for children.