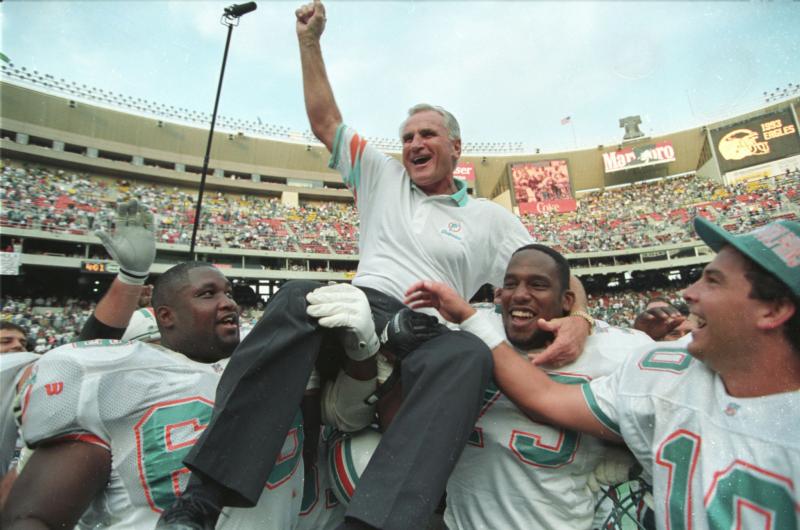 Don Shula is carried off the field after defeating the Philadelphia Eagles in this 1993 file photo. (CNS photo by Gary Hershorn/Reuters)

MIAMI (CNS) — Miami Dolphins fans knew Don Shula for his success on the field. But those blessed to see Shula off the field knew that he was every bit as successful in his Catholic faith. He just wouldn’t show it.

“What impressed me the most was that he did not lord it over people,” said Father Juan Sosa, pastor of St. Joseph Parish in Miami Beach, where Shula attended the last 10 years of his life. Father Sosa anointed the football coach the morning of May 4, the day the legendary coach died.

A tweet from the Dolphins May 4 said Shula “passed away peacefully at his home.” No cause of death was given.

Shula was born in 1930 in Grand River, Ohio. He played college football at John Carroll University in the Cleveland area and entered the NFL with the Browns in 1951.

“He was a great symbol for Miami, but he didn’t overdo it. He knew how much he was respected and loved. But he did not draw from that fame, but rather the love of children and grandchildren and his wife,” Father Sosa said.

The priest recalled how Shula told him that Detroit Cardinal John Francis Dearden, when he was a priest, influenced him almost to the point of entering the seminary.

But the church’s loss was football’s gain. Shula coached the National Football League’s Baltimore Colts (1963-69) and Dolphins (1970-95), leading his teams to six Super Bowls. The Dolphins won two Super Bowls, including a perfect 17-0 record in the 1972 season. Shula’s 347 victories are an NFL best.

After retiring as head coach, the NFL Hall of Famer served as a vice president in the Dolphins’ organization until 2016. He is survived by wife Mary Anne (married in 1993); sons David and Mike; and daughters Donna, Sharon and Anna. His first wife, Dorothy Shula, died of breast cancer in 1991.

Father Sosa and several others recalled how Shula would attend Mass every day. The priest said Shula also would lend his presence to several galas to raise funds for St. Joseph projects, including a scholarship for students going to an archdiocesan high school.

“He would sign anyone’s program or get a picture with them,” Father Sosa said. “He said, ‘What should I charge from now on so the church could get the money?'”

Jan Bell, director of St. Thomas University’s Sports Administration Program from 1985 to 2016, also recalled Shula’s faith and presence on campus. The Dolphins practiced daily on the St. Thomas campus (then known as Biscayne College) from 1970 to 1992. She said that while Shula was a bigger-than-life figure, he would walk the campus in an unassuming way.

“If you didn’t know who he was, you’d never have known he was an undefeated coach,” Bell said. “He was like a regular person.”

One benefit of the Dolphins practicing at St. Thomas was that Shula could attend daily Mass at the nearby Marian Center with the Sisters of St. Joseph Benedict Cottolengo.

Sean Clancy, a Dolphins linebacker from 1978 to 1979, said that Sister Lucia Ceccotti at the Marian Center heard that Shula had a fine fund for players who committed various infractions — late for meetings, missed weight targets, running a wrong route in practice, etc. She asked him what the fund was for; when Shula said it was for charity, she asked that the Marian Center School be the recipient.

Clancy said that Shula’s faith was part of the team’s season. Whenever the team would travel, the Dolphins had a chaplain with them, and Shula would set up a hotel ballroom for a team Mass on game day.

Clancy said that Shula provided a great example because he was a family man, and players wanted to emulate that example in the community. “He was almost like a father figure to me,” he added.

“I was petrified as a rookie,” he said, recalling that Shula “could lose his temper in a second if you didn’t do something properly. At the same time, he had great warmth. He became a real grandfatherly figure. He took great pride in (our) accomplishments.”

Father Manny Alvarez, a team chaplain for the Dolphins from 2011 to 2016, said the coach would often ask him how he was doing and about his relationship with the team.

He said even in retirement, Shula continued to inspire a sense of reverence among the team and the community and was “like a godfather for the team.”

“He still commanded that respect from the players on the team, the coaches on the team, even the fans,” Father Alvarez said. “Though I knew it was imminent, it was still shocking to hear the news today.”

Shula’s funeral Mass will take place May 8 at St. Joseph Church, followed by burial at Our Lady of Mercy Cemetery in Doral. Services will be private in keeping with restrictions on large gatherings due to the coronavirus.

Ramsey is a freelance writer for The Florida Catholic, archdiocesan newspaper of Miami.