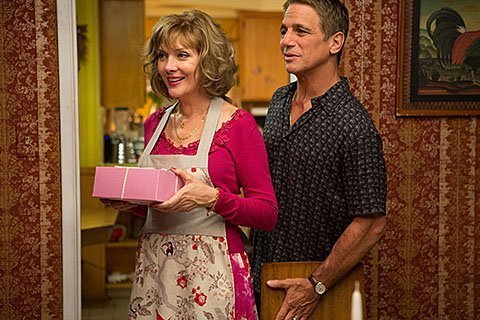 Glenne Headly and Tony Danza star in a scene from the movie "Don Jon." The Catholic News Service classification is O -- morally offensive. The Motion Picture Association of America rating is R -- restricted. Under 17 requires accompanying parent or adult guardian.

Lost in the wreckage of writer, director and star Joseph Gordon-Levitt’s helming debut is a potentially respectable message about the need to renounce at least the worst excesses of objectifying lust.

Gordon-Levitt plays suburban New Jersey bartender Jon Martello. A man of many contradictions, Jon’s lifestyle embraces hours spent pleasuring himself in front of his computer, evenings devoted to prowling bars for casual hook-ups, and weekly Mass attendance preceded by a perfunctory visit to the confessional. There he all but boasts of his prolific sins and receives in response only the rote assignment of a token penance.

On one of his nightly outings, Jon spots the bridge-and-tunnel bombshell of his dreams, Barbara Sugarman (Scarlett Johansson). Ambitious and manipulative, gum-chewing Barbara keeps Jon waiting for sex, not out of any sense of virtue, but to make him knuckle under to her many demands.

Yet no sooner have they completed their first bedroom encounter than the horrified Barbara catches Jon in the act of ogling his digital delights. He tries to explain the situation away, but it’s clear that he will eventually have to choose between rank sensual pleasure and his aspirations for a genuine romance.

There are some perceptible good intentions at work here. Still, the fact that the only moral guidance Jon receives comes not from the priest he so blithely bombards with his transgressions but from Esther (Julianne Moore), an earthy older woman he meets in night school, is telling. She nudges him in the right direction, but not very far.

Long before she manages even that, so much of the material that beguiles Jon has been flashed across the screen — far more than is necessary to tell his story — and so much ignorance-driven disdain has been shown toward Catholic practice that disgust has long extinguished any initial sense of indulgence.