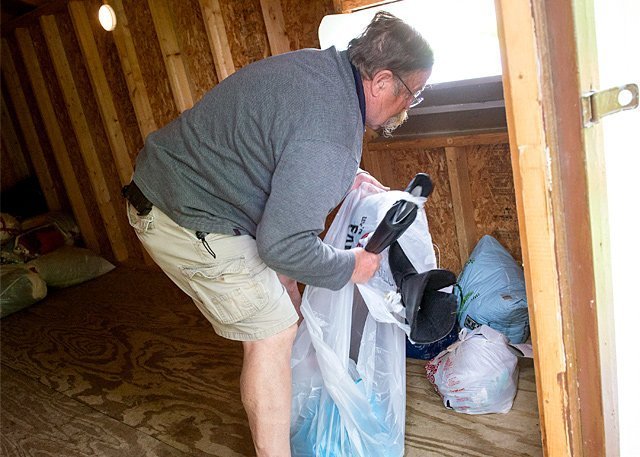 Wally Lannon moves donated items inside a St. Pauly Textile drop-off shed at St. Dominic Church in Shortsville May 26. Lannon checks the shed each day to keep it organized and make it easier for the weekly pick-up of items.

St. Pauly Textile’s tan-colored, wood frame drop-off sheds have become a familiar sight throughout the region over the past 20 years.

These sheds, which house donations of used clothing, shoes, belts, purses, linens, blankets, curtains and stuffed animals, may be found in the parking lots of 34 of the Diocese of Rochester’s Catholic churches, including 14 churches in the diocese’s Finger Lakes region of Wayne, Ontario, Yates, Seneca and Cayuga counties.

St. Dominic Church in Shortsville, which is part of St. Peter Parish, has had a St. Pauly shed in its parking lot for nearly 20 years now, according to Andrea Record, St. Peter’s business manager. St. Francis Church in Phelps, which is another of St. Peter’s worship sites, has hosted a shed for eight years, she added.

“The sheds have been established for so long now that I think they’ve gotten to be pretty well known, especially around the Manchester/Shortsville community,” Record remarked.

People in these communities know they can bring bags of their unwanted clothing to the sheds, Record said. What they may not know, however, is what happens to the clothing after they donate it, or why the parishes choose to host the drop-off sheds.

St. Pauly Textile Inc. is a family-run, for-profit company that was founded in 1996 by Joe DeGeorge and Paul Callerame. Hosting a shed for St. Pauly Textile is appealing to parishes because the company pays hosting organizations by the pound for the clothing collected.

“Every month we send a check to each church group based upon how much clothing was collected,” said Ben DeGeorge, president of St. Pauly Textile and one of Joe DeGeorge’s sons.

These funds are utilized differently by each host church, DeGeorge said. Funds raised through the St. Pauly shed at St. Francis, for example, are added to the parish coffers, Record said. Much of the money raised through the shed at St. Dominic also is put toward the parish’s operating budget, with a certain amount allocated for youth-ministry expenses.

Sometimes parishes decide how to allocate proceeds from their clothing collections based upon who performs the necessary maintenance inside the drop-off shed, Record noted. These upkeep tasks include checking the inside of the shed each day and moving bags away from the chute and over to one side of the shed. These steps ensure that the chute does not get clogged and make it easier for a team from St. Pauly Textile to collect the clothing each week.

“It is something that you have to keep up with on a pretty much daily basis,” Record explained. “If you skip a day or two you can get quite a pile.”

Volunteers performs these tasks in the shed at St. Francis, Record said. At St. Dominic, the shed originally was maintained by the youth minister with help from teens and their families, so the proceeds from that shed were used to fund youth-ministry programs. Now, however, the box is kept up by one of the parish’s maintenance men, so most of the proceeds fund general parish expenses, and a set amount is still put toward youth-ministry expenses, Record said.

The parish’s partnership with St. Pauly Textile has been quite profitable over the years, she added.

“It certainly has made a lot of money for the youth for all kinds of different things, and now ‚Ä¶ it supports the parish budget significantly,” Record said.

After the bagged clothing is removed from the shed each week, it is taken to St. Pauly Textile’s facility in Farmington and then sold to such entities as domestic and foreign government bodies, relief organizations and private companies.

“We bundle the clothing up and send it on to organizations that purchase it from us for an extremely inexpensive price by the tractor-trailer load,” DeGeorge said. “The end location of the clothing depends on the current demand and need for clothing around the world.”

Sometimes the donated items are put to use locally, as hosting churches are encouraged to take donations out of their sheds if they know of local families or individuals in need, DeGeorge added. The company’s goal is to get usable, used clothing into the hands of people who can use it, whether they live in the United States or halfway around the globe.