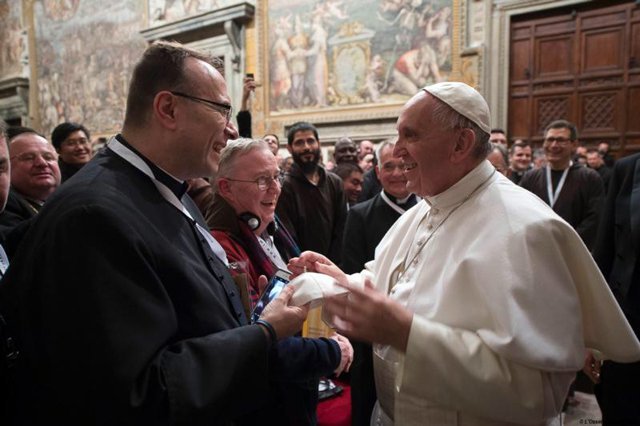 A clergyman gives Pope Francis a skull cap, or zucchetto, during a Feb. 9 meeting with "missionaries of mercy" at the Vatican.

VATICAN CITY (CNS) — On the eve of sending off "missionaries of mercy" to all corners of the globe, Pope Francis told his specially appointed men that the reassuring strength of God’s love — not the "bludgeon of judgment" — will bring the "lost sheep" back to the fold.

"Being a missionary of mercy is a responsibility that is entrusted to you because it asks you to be a firsthand witness of God’s closeness and his way of loving, not our way, which is always limited and sometimes contradictory," he said Feb. 9.

Meeting with hundreds of missionaries who came to Rome to receive in person their special papal mandate on Ash Wednesday, Pope Francis said he wanted to highlight the unique aspects of their new ministry so they would carry it out properly and be "a real help" to the people they encounter.

The pope designated 1,142 religious and diocesan priests from all over the world to preach and teach about God’s mercy and serve especially as confessors during the Year of Mercy, which ends Nov. 20. The men were to receive their special mandate during a ceremony in St. Peter’s Basilica Feb. 10.

He told the missionaries that they need to recognize that people’s desire for forgiveness might be obscured by their inability or embarrassment to talk about their sins.

"It’s not easy to go before another person, knowing he represents God, and confess one’s sins," he said. Confessors should be respectful and encouraging, he said, because the penitents can easily feel exposed and vulnerable "with their weakness and limitations, with the shame of being a sinner."

"Do not forget, there isn’t a sin before you, but a repentant sinner," a person who wants to be listened to, forgiven, and brought home again, he told them.

With the little strength they have on their own, sinners want to do everything to be a child of God again, therefore, do not be a judge "with a sense of superiority, as if we were immune from sin," or be too invasive with inappropriate or prying questions, the pope said.

Help the sinner — who may be feeling the same shame of nakedness Adam and Eve felt in the Garden of Eden when they recognized the evil they had done — by "covering the sinner with the blanket of mercy, so they will no longer be embarrassed and can regain the joy of their filial dignity," he said.

He said he wants the missionaries to be a living expression of "the church who, like a mother, welcomes anyone who approaches her," knowing that through her they will become one with Christ.

In the confessional, the pope said, they must remember that it is Christ who welcomes, listens, forgives and grants peace. "We are his ministers and we always need to be forgiven by him first," he said.

The pope said whatever sin a priest hears, he must always remember his own sinful nature and be a humble channel of God’s mercy.

He said he still feels the joyful, life-changing moment he experienced as a teenager Sept. 21, 1953, after he went to confession.

Speaking off the cuff, he said, "I don’t remember what the priest said" because what he said was not as important as his smile and the overwhelming sense of God’s presence.

"It was like being received by a father," he said.