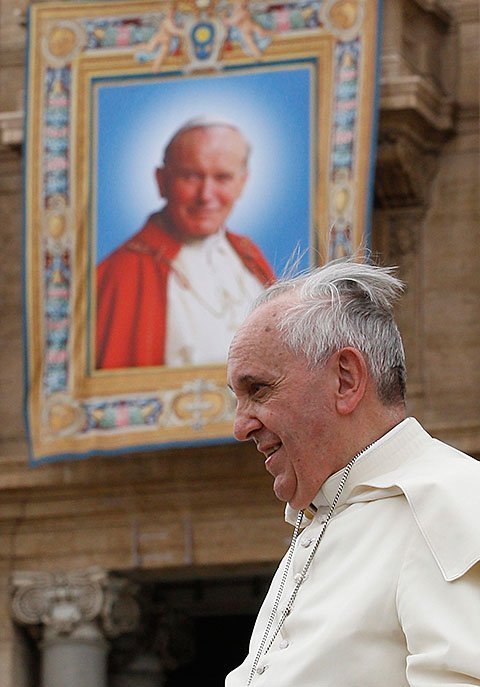 Pope Francis passes the banner of St. John Paul II as he leaves his general audience in St. Peter's Square at the Vatican April 30.

VATICAN CITY (CNS) — Too often Catholics turn the church into "a company that manufactures impediments" to faith, rather than a community that patiently helps people come to believe in Jesus, Pope Francis said.

"Grace is more important than bureaucracy," the pope said May 8 in a homily at his early morning Mass in the Domus Sanctae Marthae, where he lives.

According to Vatican Radio, Pope Francis focused his homily on the day’s first reading from the Acts of the Apostles (8:26-40), which details how the apostle Philip led the Ethiopian to faith and baptism.

The first thing the account shows, the pope said, is Philip’s willingness to obey the Lord’s call to leave what he was doing and set out. "Without this docility to the voice of God, no one can evangelize."

Second, the Bible explains how Philip walked with the Ethiopian, listening to his concerns, respecting his sensibilities and offering explanations.

"You cannot evangelize without dialogue. You just can’t because you must begin where the person is," the pope said. "This is very important."

Pope Francis said he knew some people would object, "But, father, you waste so much time that way because everyone has his or her own story," experiences and ideas.

The pope said his response to that claim was to tell them: Look at how much time "God wasted in creating the world, and he did it right."

"Dialogue," the pope insisted. "Waste time with the other person because that person is the one God wants you to evangelize."

While they were still on the road, the Ethiopian saw some water and asked Philip to baptize him. And Philip, placing the Ethiopian "in the hands of God, in his grace," did so immediately, the pope said.

Trusting in God’s grace, he said, is much more important that fulfilling some bureaucratic procedures and paperwork. "May the Lord help us understand this."