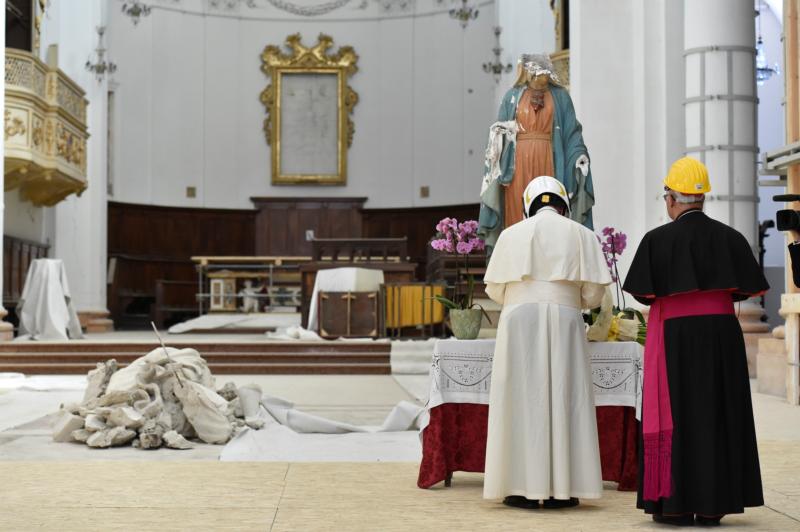 Pope Francis and Archbishop Francesco Massara of Camerino-San Severino Marche pray before a partially destroyed statue of Mary in the cathedral of Camerino, Italy, June 16, 2019. (CNS photo by Vatican Media)

CAMERINO, Italy (CNS) — Wearing a firefighter’s helmet painted white and gold for the occasion, Pope Francis entered the earthquake-damaged cathedral in Camerino and prayed before a statue of Mary missing the top of its head.

The pope began his visit June 16 outside the historic city by visiting the temporary modular homes of dozens of families who lost everything when an earthquake struck the region in October 2016.

Pope Francis arrived in the town early in the morning, and the first couple he visited insisted he try a pastry.

“I had breakfast before I left,” he explained. But the woman said she would be offended if he didn’t try just one, so he did.

A few doors down, a young woman holding a small, squirming dog told him, “I can’t believe you are really here.”

The centerpiece of the pope’s visit was the celebration of Mass in the small square outside the still-closed cathedral.

In his homily, Pope Francis focused on the question from Psalm 8: “What is man that you are mindful of him?”

“With what you have seen and suffered, with houses collapsed and buildings reduced to rubble,” the pope said, it is a legitimate question for people to ask.

Faith and experience, though, make it clear that God always is mindful of his human creatures, “each one is of infinite value to him,” the pope said. “We are small under the heavens and powerless when the earth trembles, but for God we are more precious than anything.”

Visiting the families in temporary housing, Pope Francis kept urging them to keep hold of hope, and he did the same in his homily.

“Earthly hopes are fleeting, they have an expiration date,” the pope said. But the Christian virtue of hope, a gift of the Holy Spirit “does not expire because it is based on God’s faithfulness.”

Such hope, he said, gives birth to “peace and joy inside, independently of what happens outside. It is a hope that has strong roots, one that no storm can uproot.”

Pope Francis told the people he wanted to visit just to show his closeness.

At the same time, he said he knew that, after three years, media attention and the solidarity of other Italians has waned, promises of a speedy reconstruction seem to have been forgotten and frustration increases as residents watch more and more people move away permanently.

He prayed that the Lord would prompt people “to remember, repair and rebuild and to do so together, without ever forgetting those who suffer.”