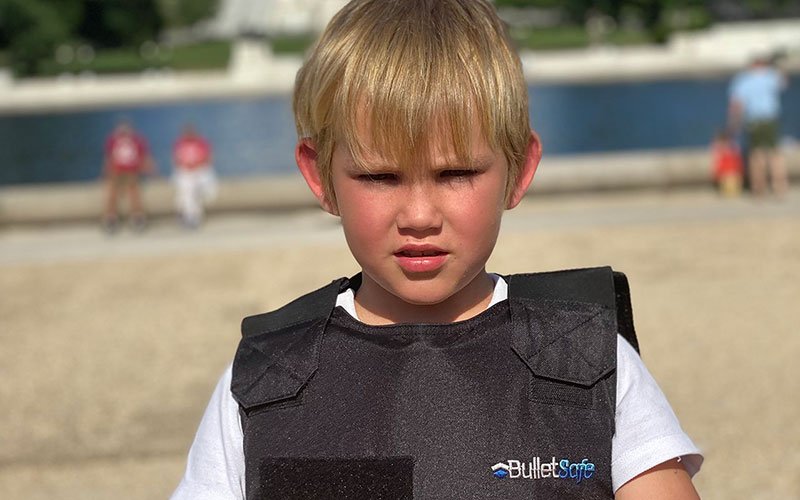 Jacob Kelly, 6, dons a bulletproof vest while participating in a rally supporting gun control in front of the U.S. Capitol in Washington June 6, 2022. Parents, with their children nearby, gathered near the Capitol to call on Congress, particularly Republican senators, to push through restrictions against high-powered weapons that have been used in mass shootings. (CNS photo/Rhina Guidos)

WASHINGTON (CNS) — With the U.S. Capitol in the background, Jacob Kelly, 6, adjusted his little bulletproof vest against his chest.

He stood with other children who turned out June 6 to speak, they said, for their peers who no longer could: fourth graders gunned down a few days before in Uvalde, Texas, and children of Jacob’s age killed at Sandy Hook Elementary in Newtown, Connecticut, in 2012.

“How many of us have to die … for lawmakers to do their job?” asked the young organizers of Students Demand Action, the first of several groups to arrive in Washington in early June for a week of protests demanding that U.S. lawmakers pass restrictions on high-powered weapons such as the ones that have been used in mass shootings, including at schools.

The week was set to culminate with a large March for Our Lives demonstration June 11, an event organized by students of Marjory Stoneman Douglas High School in Florida, which experienced a mass killing of its own in 2018.

The students were accompanied by groups of parents, including Moms Demand Action and Everytown for Gun Safety, which all shouted their slogan toward the Capitol: “Don’t look away!”

Sens. Richard Blumenthal and Chris Murphy, both Democrats from Connecticut, spoke to the crowd and told them they were getting closer than ever on reaching some sort of bipartisan deal on gun control measures with Republican senators.

The deal may include expansion of mental health programs and increased resources for security at schools. But it may not have what gun control advocates such as the ones descending on Washington are calling for, namely expanding background checks, raising the age to purchase guns from 18 to 21 and banning certain weapons that have a high capacity to kill.

Several prelates representing various committees of the U.S. Conference of Catholic Bishops June 3, in a letter to Congress, urged lawmakers to take action.

They mentioned the May 24 shooting in Uvalde when an 18-year-old walked into the elementary school with a high-powered rifle, leaving 19 students dead, mostly fourth graders, and their two teachers, as well as a mass shooting targeting Black people in a grocery store a few days before and a recent mass shooting at a medical building on the campus of a Catholic hospital.

“There is something deeply wrong with a culture where these acts of violence are increasingly common,” the bishops wrote. “There must be dialogue followed by concrete action to bring about a broader social renewal that addresses all aspects of the crisis, including mental health, the state of families, the valuation of life, the influence of entertainment and gaming industries, bullying, and the availability of firearms.”

They implored U.S. lawmakers to listen to the words of Pope Francis following the mass shooting in Uvalde and say “‘no more’ to the indiscriminate trafficking of weapons.”

On June 5, a day after celebrating a vigil Mass for the feast of Pentecost, which commemorates the descent of the Holy Spirit on the Apostles and the followers of Christ, San Antonio Archbishop Gustavo Garcia-Siller, who has been tending to those affected by the shooting in Uvalde, implored the Holy Spirit’s help.

“With the rising of senseless deaths of innocent people, our legislators grow in fear of making new radical decisions to (save) lives,” he wrote on Twitter. “Holy Spirit give them courage to stand for life. Your power strengthens weak wills and selfish motivations to pursue the common good.”

At the student-led rally in Washington, Adriana Guzman, who was in from Mexico visiting her daughters who study in the U.S., stopped to listen to the young speakers and then to the politicians discussing gun control close to the Capitol.

“If what happened in Uvalde doesn’t cause pain, nothing can cause pain,” she told Catholic News Service.

She said it was particularly painful for her, seeing the community that borders her native country affected. Did people not care because the children came from farmworker families? she asked.

The availability of such easy access to guns made her worry for her daughters, she said. One is in college but the other attends high school in the U.S., and if schools can’t be safe, that puts into question safety in many public spaces including tourist attractions and workspaces, she said.

She nodded her head at the students calling for change, asking for protection.

“This has to change,” Guzman said.