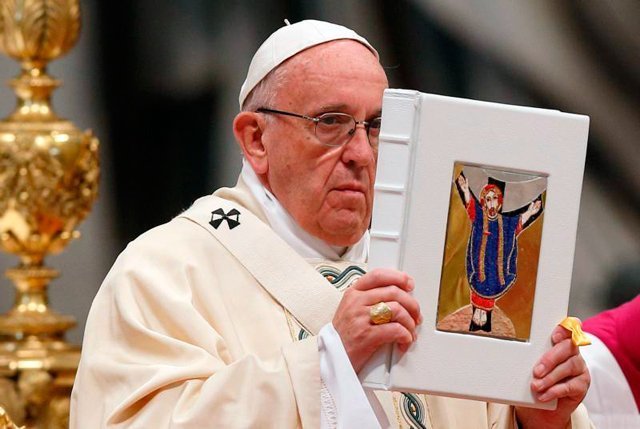 VATICAN CITY (CNS) — Let no one feel ignored or mistreated when they encounter a member of the Roman Curia or staff working at the Vatican, Pope Francis said.

May everyone experience "the considerate care of the Good Shepherd" himself, who is the foundation and inspiration for all people who serve the church, the pope said during a Mass marking the Jubilee of the Roman Curia and Vatican offices and institutions.

The jubilee was celebrated Feb. 22, the feast of the Chair of Peter, which commemorates the authority Jesus gave to St. Peter and his successors — the popes.

In his homily, the pope asked the cardinals, bishops, religious and laypeople gathered in St. Peter’s Basilica to keep their minds and hearts "fixed on Jesus Christ, the beginning and the end of every action of the church. He is the foundation and no one can establish something different. He is the rock upon which we must build."

By passing through the Holy Door of mercy and praying before the tomb of St. Peter, those assembled were asked to repeat the profession of faith and reflect on their call to conform their lives to God.

For those who are priests, the pope said, they more than anyone else must model themselves after the Good Shepherd: taking care of his flock, seeking out the lost sheep and bringing healing to the sick and wounded.

"It’s a faithful, constant and unconditional commitment" to be a sign of God’s boundless love, he said, "so that all of the weakest may meet his mercy."

Asking that they pray God enlighten, purify and transform them in their mission, the pope said they must also cultivate and practice this same pastoral ministry in their work at the Vatican.

With all of the people they encounter each day, he said, "may no one feel neglected or mistreated," and instead feel God’s attentive concern.

"We are called to be God’s collaborators," he said, as they carry out their unique and valuable mission.

"Let’s let the Lord free us from every temptation that distances us from what is essential in our mission and rediscover the beauty of professing the faith in the Lord Jesus."

Being faithful and being merciful are two sides of the same coin, he said, because being faithful is acting and living according to Christ’s heart, which is filled with mercy for others.

Mass for the Roman Curia and Vatican staff was the culmination of a number of morning events marking the special jubilee. Thousands of employees, including family members, walked through the Holy Door of the basilica in a solemn procession from the Paul VI audience hall.

Cardinals in Rome led the procession, followed by archbishops and bishops who head curial offices. Pope Francis joined the long procession with a large group of laypeople and religious, walking prayerfully with the large crowd. Priests and monsignors were the last through the door and into the basilica.

The day’s events began with a spiritual meditation in the Paul VI hall led by Jesuit Father Marko Rupnik.

With the pope, top curial officials and many Vatican employees present, Father Rupnik said every central church office, not just the Curia in Rome, risks the temptation of its administrators becoming too self-centered.

"It is a terrible temptation," he said, because it sets functional efficiency, the institution, the organizational structure and the individual above all else.

The focus on the individual not only can let in "all the pathologies of the world," it causes scandal when the world sees "us living Christianity as an individual reality" and not joined together as part of the body of the church and Christ, he said.

"The demon of individual perfection is the ruin" of the body of the church and communion, he said.

"The perfection of the church is in organization," the Jesuit priest said, which is not just setting up a bunch of commissions. It means the church shows the world how to organize, lead and manage life in a way that transforms and transcends the individual.

This kind of "organization" in the church shows a fractured world what including and serving others means and "it manifests a deeper reality."

When people encounter someone who works for the church, it is beautiful when they say, "you know, I saw people who were free, free from themselves," generous, willing and available.

"This is what must emerge" and that is what will have an impact on the rest of the world, he said.