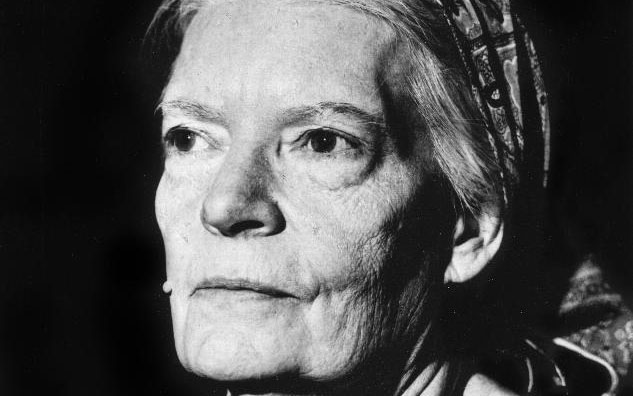 This is a still from the "Revolution of the Heart: The Dorothy Day Story," a film by Martin Doblmeier. (CNS photo courtesy Journey Films)

NEW YORK (CNS) — Complicated, flawed, often misunderstood and as controversial as she was beloved, Dorothy Day (1897-1980), co-founder of the Catholic Worker Movement, is the subject of the documentary “Revolution of the Heart: The Dorothy Day Story.”

The film opens with Pope Francis’ September 2015 talk before a joint session of Congress, during which the pope highlighted four individuals who, he said, “shaped fundamental values which endure forever in the spirit of the American people.” They were President Abraham Lincoln, the Rev. Martin Luther King Jr., Trappist monk and spiritual writer Father Thomas Merton and Day.

Speaking of the film’s subject, the pontiff said, “A nation can be considered great when it strives for justice and the cause of the oppressed as Dorothy Day did.” As U.S. Sen. Tim Kaine of Virginia — who once served in the Jesuit Volunteer Corps — recalls, his colleagues were asking him who Day was because they had no clue.

“Revolution of the Heart” recounts the improbable yet fascinating journey of this “typical grandmother,” who eventually became, in the documentarian’s words, “one of the greatest champions for the poor America has ever known,” while “earning her place on the FBI watch list as a dangerous American.”

Older viewers, especially Catholics, may be familiar with the arc of Day’s career. For younger ones, her story may prove revelatory.

Day began her public life as a writer for various socialist publications in New York City while her private affairs took on a distinctly bohemian cast. She had an abortion and attempted suicide twice before taking up with biologist Forster Batterham. In 1926, their common-law relationship produced a daughter, Tamar.

Soon after Tamar’s birth, inspired in part by reading Thomas a Kempis’ spiritual classic “The Imitation of Christ,” Day became a Catholic. But her desire to be married in the church drove away matrimony — and religion-averse Batterham, leaving her a single mom.

Six years later, Day would meet her collaborator in the founding of the Catholic Worker Movement, Frenchman Peter Maurin (1877-1949). Two days before Maurin showed up, “literally on her doorstep,” as author Jesuit Father Mark Massa puts it, Day had prayed for a sign from God regarding her future.

Due to its mature themes, which include poverty, war and racism — as well as those already referred to above — the program is best suited to older teens and adults. It can be especially recommended for the former group given its religious significance and catechetical potential.

Archival video clips of interviews with Day still have a powerful impact on viewers 40 years after her death. “I think if you take the Lord’s words,” she says, “you’ll find they’re pretty rigorous.” She memorably describes the Sermon on the Mount as “an examination of conscience to see how far we’ll go.”

To its credit, the film doesn’t shy away from the controversial stances that got Day into trouble during her lifetime and that continue to animate her detractors. She was an unabashed anarchist, for instance, and her uncompromising pacifism — especially during World War II, the “good war” — cost her many followers.

Yet, given its running time, the documentary could have explored some subjects in more depth, especially the lifelong effects on Day of the abortion she obtained. “Revolution of the Heart” is, nevertheless, an excellent primer on Day, one that may prompt viewers in general — and Catholics observing Lent in particular — to ponder whether they have a place in such a revolution.

Editor’s Note:  “Revolution of the Heart: The Dorothy Day Story.” will air on WSKG (Binghamton, Corning, Elmira) and WXXI World Rochester (over-the-air on digital television channel 12.2 as well as on Spectrum Cable channel 1275) at 8 p.m. March 9. It will also air at 1 a.m. March 10 on WSKG World and WXXI World.