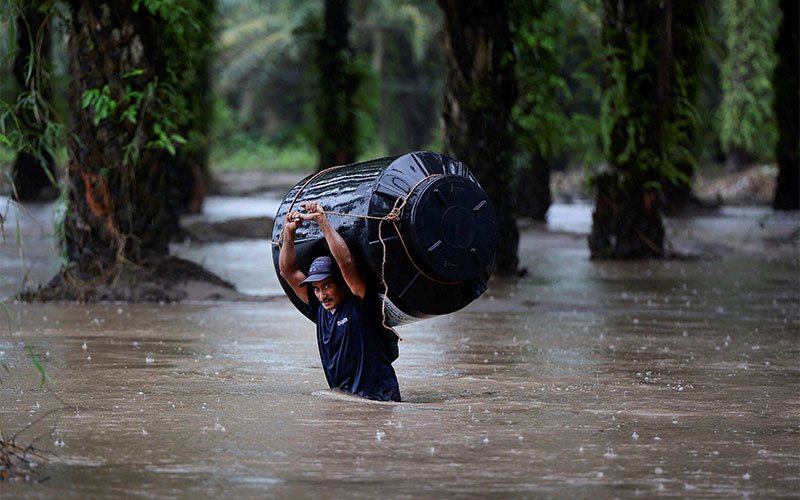 A man carries an empty water tank through a flooded area after the impact of tropical storm Julia in Progreso, Honduras, Oct. 9, 2022. The U.S. National Hurricane Center said life-threatening flash floods and mudslides were possible across Central America and southern Mexico through Oct. 11. (CNS photo by Yoseph Amaya/Reuters)

WASHINGTON (CNS) — Authorities in Central America feared the number of dead would increase after the weather system known as Julia left much of the region buried in mud or covered in floods in early October.

Five members of the armed forces of El Salvador are part of 28 reported fatalities related to Julia as of early Oct. 11, but the death toll is expected to rise. The country’s secretary of environment said late Oct. 10 that El Salvador had received the equivalent of about 15% of its annual rainfall in one day. Catholic churches there opened their doors to those seeking shelter from the storm.

Nicaragua, where Julia made landfall as a Category 1 hurricane Oct. 9, reported one death, though many doubt the government’s account. The online news site Divergentes said reports from social media document at least two deaths.

Authorities in El Salvador, Guatemala and Mexico, however, reported widespread mudslides, flash floods, overflowed rivers and thousands in shelters awaiting the system to dissipate as it travels north.

Guatemala reported destroyed homes as well as roads and bridges washed away by Julia as authorities scrambled to look for people trapped under fallen trees and structures. Five soldiers in El Salvador, who had been monitoring a community for criminal activity, died when a wall from a house collapsed and buried them, one of the national newspapers reported.

Authorities in Guatemala sounded the alarm about what the damage to crops could do to already rising prices for food staples such as beans, coffee and plantains.

In Nicaragua, where the government reported material damage, morning Mass at the cathedral in the capital of Managua continued as scheduled hours before landfall as Catholics prayed for the intercession of Mary in protecting the politically troubled nation from the natural disaster.

Before Julia headed north to Central America, it passed through Venezuela, causing a landslide that left at least 25 dead and 50 missing, as authorities scrambled to unearth victims buried in the mud.