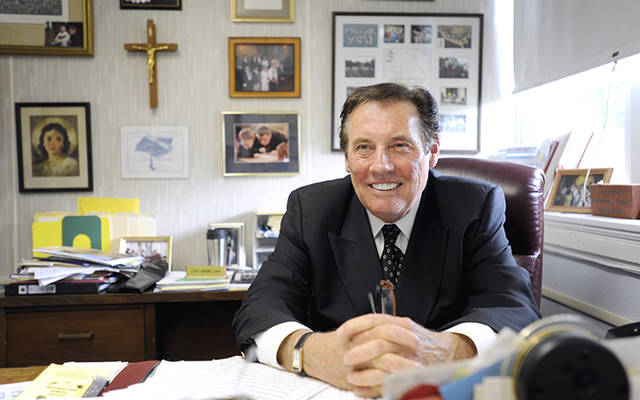 Principal with ‘heart the size of Texas’ retires

A native of Springfield, Mass., Dr. Benjamin earned his bachelor’s degree from American International College, master’s from Tufts University, and doctorate in special education and curriculum development/administration from Syracuse University. During his 57-year career in education, he served as a principal in the Geneseo School District (1972-87) and also as a principal in Cambridge, N.Y. (1987-90), and Caledonia-Mumford (1990-97).

In a 2016 Catholic Courier story, Dr. Benjamin recalled that he had strongly considered retiring in 1997 before learning of the open principal’s position at St. Agnes. From there, he spent nearly two decades striving to keep the modestly sized Catholic school in Livingston County thriving. He established scholarship and summer-education programs for St. Agnes, and oversaw additions and improvements in such areas as Spanish, technology, art and reading.

Dr. Benjamin also brought many cultural events to the school that were open to the public as well. Under his guidance, St. Agnes organized an annual Sept. 11 remembrance that includes several veterans’ groups and other civic organizations. He was presented with awards from such groups as the American Legion, Genesee Valley Council of the Arts, State of New York and Rotary International.

“The St. Agnes school community is grateful beyond measure for the 19 years Dr. Ben dedicated to our school as principal, and the support he continued to give after his retirement,” said Elizabeth Jensen, the current St. Agnes principal who succeeded Dr. Benjamin in 2016. “The traditions that he established, whether the 9/11 ceremony or the fine arts program, have become a part of the fabric of our school culture that are cherished and will continue for many years to come.”

His personal touch was exemplified by his longtime ritual of standing in front of St. Agnes’ entrance every school morning in all kinds of weather, greeting students with hugs and encouraging words as they arrived.

“This has just become my family,” he said in 2016, acknowledging his passion for the school’s students, staff and parents.

“Dr. Ben touched the hearts of every student and family he worked with, and will be truly missed by all those who knew and loved him,” Jensen remarked.

Dr. Benjamin is survived by his sister, Anita (Maurice) Ferriter of Springfield, Mass.; nieces and nephews; and dear friend, Victoria Rose of Avon.

Calling hours for Dr. Benjamin will take place Aug. 13, 2020, from 4 to 7 p.m. at Rector-Hicks Funeral Home, 111 Main St., Geneseo. Face masks and social distancing will be required. His funeral Mass is set for Aug. 14, 2020, at Avon’s St. Agnes Church. The Mass is private but will be livestreamed at 10 a.m. on St. Agnes School’s Facebook page. Interment will be at St. Mary’s Cemetery in Geneseo.

Memorial donations may be made to the St. Agnes School Foundation, 60 Park Place, Avon, NY 14414.