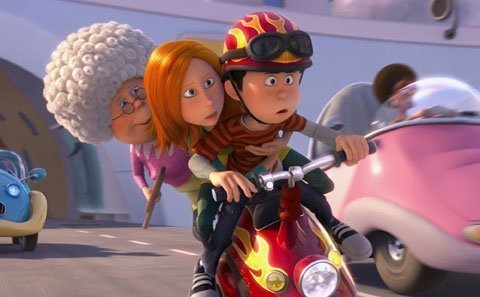 NEW YORK (CNS) — "Unless someone like you cares an awful lot, nothing is going to get better."

That’s the urgent moral of a beloved children’s book now translated into a 3-D animated feature as "Dr. Seuss’ The Lorax" (Universal). This action-packed, candy-colored film for the entire family retains the charm of the original 1971 fable by Theodore Geisel while enhancing its central message: To wit, it’s not nice to fool with Mother Nature.

Or, in this case, Father Nature, in the guise of the title character (voice of Danny DeVito). The legendary "guardian of the forest," the Lorax is a grotesque furry creature with a broad mustache. Chop down a tree or otherwise despoil the environment and you’ll provoke a tongue-lashing from the Lorax — and a warning of dire consequences to come.

Since a spare, 61-page children’s book does not a 94-minute film make, director Chris Renaud ("Despicable Me") and screenwriters Cinco Paul and Ken Daurio (who also adapted 2008’s "Dr. Seuss’ Horton Hears a Who!") have considerably expanded Geisel’s story, building their tale around a teen romance.

Our hip protagonist, Ted (voiced by Zac Efron, and named for Geisel), yearns for Audrey (voice of Taylor Swift, and named for Mrs. Geisel). Audrey, in turn, pines, so to speak, for just one thing — the sight of a real live tree.

You see, there are no trees in Thneedville, a town where every bit of the environment is artificial. Lording it over the locals is villainous Aloysius O’Hare (voice of Rob Riggle), who makes his fortune bottling fresh air and selling it to the public.

"Put anything in a plastic bottle and people will buy it," he says. "More smog means more air sales."

Thneedville wasn’t always this way. The valley was once a lush paradise filled with truffula trees (cross a palm tree with cotton candy and you get the picture) and magical creatures, including Bar-ba-loots (bears), Swomee-Swans and Humming-Fish, goldfish who can both walk and carry a tune.

According to Ted’s dotty Grammy Norma (voice of Betty White), who remembers the good ol’ days, the environmental disaster was man-made. Go and find the recluse called the Once-ler (voice of Ed Helms), she tells Ted; he knows what happened to all the trees.

Indeed he does. As a young, ambitious entrepreneur, the Once-ler defied the Lorax’s warnings and harvested the truffula trees to make a miracle fabric called thneed.

Consumed with greed, the Once-ler ravaged the valley, displacing the animals. Eventually, the shame-filled, Grinch-like creature descended into madness.

Making the point that, in the end, no one is excluded from possible redemption, however, the Once-ler sees his encounter with Ted as a chance to restore the natural balance. But only if Ted "cares an awful lot."

"Dr. Seuss’ The Lorax" offers a positive message about caring for God’s creation while also respecting the needs of others. Its first-rate animation and catchy songs will make it an enjoyable outing for viewers of any age.

The film contains some cartoonish action. The Catholic News Service classification is A-I — general patronage. The Motion Picture Association of America rating is PG — parental guidance suggested. Some material may not be suitable for children.