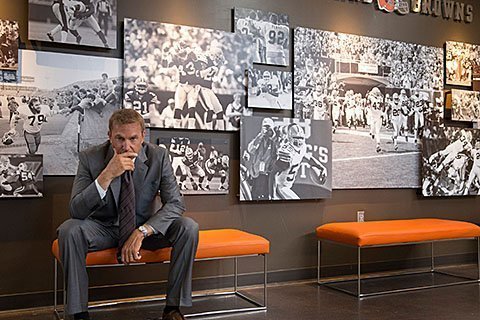 Kevin Costner stars in a scene from the movie "Draft Day." The Catholic News Service classification is A-III -- adults. The Motion Picture Association of America rating is PG-13 -- parents strongly cautioned. Some material may be inappropriate for children under 13.

NEW YORK (CNS) — It may be baseball season, but it’s the National Football League that’s front and center in "Draft Day" (Summit).

This rather parochial (and heavily promotional) sports drama explores the extreme measures professional teams will take to secure new talent and, they hope, a shot at the Super Bowl.

Producer-director Ivan Reitman ("Ghostbusters," "Dave") tackles a factual subject in this take on the NFL draft, the annual event during which teams negotiate to sign the top players coming out of college.

Niccolo Machiavelli would feel right at home amid all the cunning and duplicity; athletes are mere pawns in a great big money game. Along with the morally troubling machinations, some plot elements, a fleeting female shower scene and overheated language put this out of bounds for youngsters.

The first day of the draft has not started well for Sonny Weaver Jr. (Kevin Costner), the fictitious general manager of the real-life Cleveland Browns. Personal and professional issues bubble to the surface: Ali (Jennifer Garner), Sonny’s colleague and girlfriend, has announced she’s pregnant. His acerbic mother, Barb (Ellen Burstyn), is a mess, grieving the death of her husband, the former Browns coach.

The present occupant of that job, Coach Penn (Denis Leary), has threatened to quit. And Browns owner Anthony Molina (Frank Langella) is expecting big things from the draft.

"You need to make a splash," he tells Sonny. "A splash sells tickets. People will pay to get wet."

Sonny’s splash is more like a tsunami. The Seattle Seahawks offer Sonny a chance to secure their number-one draft pick, quarterback Bo Callahan (Josh Pence), in return for future prospects from the Browns.

Sonny can barely believe his luck — in fact, the deal seems too good to be true. Trouble is, Sonny already has a star quarterback, Brian Drew (Tom Welling), and he was planning to use his Browns pick to draft promising running back Vontae Mack (Chadwick Boseman).

His hold on Bo puts Sonny in the catbird’s seat, and "Draft Day" turns into an extended telephone call as teams cascade Sonny with alternative deals. Reitman makes good use of split-screen sequences to show the tense emotions at each end of the phone line. As the draft clock ticks away, promising young careers are held in the balance.

Ultimately, "Draft Day" is for confirmed football fans. Others will wish they had a rulebook to follow all the complex regulations — as well as a guide to the many cameo appearances by celebrity players and sports announcers.

The film contains a premarital situation, brief, partially obscured rear nudity as well as frequent profanity and rough language. The Catholic News Service classification is A-III — adults. The Motion Picture Association of America rating is PG-13 — parents strongly cautioned. Some material may be inappropriate for children under 13.