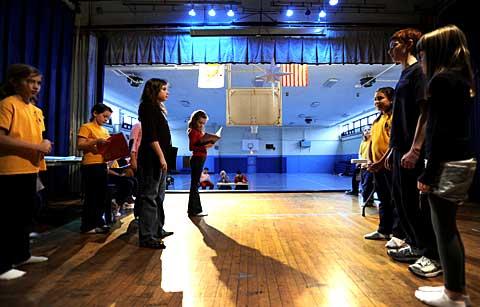 Members of the St. Genesius Players, a drama club for students at St. Mary School in Canandaigua, rehearse at the school Jan. 19. They will present a Passion play called “Lenten Reflections” Feb. 26 and 28.

Alivia Collins is only in fourth grade, but she’s already familiar with the thrill of performing on stage in front of an adoring audience.

"I like acting, and I like being main parts in the shows that we do," said Alivia, who is in her second year of participating in the musical drama club at All Saints Academy in Corning.

Last year she nabbed one of the biggest roles possible when she played the part of God in her club’s production of "Jonah and the Whale."

The 30 students in Meeker’s drama club spend the first half of each school year learning about the basics of being on stage and working in theater.

"We learn how to use props, how to use the stage the best way possible, how to project our voices and how to use our body language," she said.

The students then put this knowledge to use, she said, as they perform a play during the school’s Christmas program and another production in the spring. Performing these plays in front of their peers and the entire student body helps students build confidence in themselves, and this newfound confidence carries over into other areas of their lives, Meeker said.

"If they’re more confident with themselves they’ll try a little harder. You can see improvement in their school work," Meeker said. "The teachers see it play out in class. The kids are more willing to answer questions."

The skills students learn in drama club help them become more well-rounded children, she added. Working to accomplish a common goal with peers who may or may not be in their circle of friends also helps the students learn to work as part of a team, she said.

These skills will stay with students long after they leave school and move on into their professional lives, noted Carol Commisso, director of the St. Genesian Players drama club at St. Mary School in Canandaigua.

"They become adept at public speaking, they learn self-discipline and gain confidence in themselves," said Commisso, who also is an aide in the second-grade class at St. Mary.

Ginny Crowley, the St. Genesian Players’ founder and production manager, said she and Commisso work to help the students learn to express themselves, develop their unique voices and develop an awareness of the acting instrument, which is the human body.

"It teaches them to respect the whole essence of the body — the eyes, the nose, the throat. It really puts them in touch with their anatomy and how they must take care of it if they want to be an actor," said 80-year-old Crowley, who the students fondly refer to as "Aunt Ginny."

Each meeting of the St. Genesian Players begins with a prayer to St. Genesius, the patron saint of all those who earn their living strictly through the theater, said Crowley, who founded the club five years ago after retiring from the theater department at City University of New York’s Kingsborough Community College. The students then work on vocal and physical exercises before they start rehearsing the production they’re working on, added Commisso, who is involved with the Monsignor Schnacky Community Players at St. Catherine of Siena Parish in Mendon.

"We not only work on lines, but also character development and stage movement with the students," Commisso said. "There are also some players who prefer not to be on stage performing, and they learn the technical side of theater working lights, sound and curtains."

Oftentimes drama-club participants will learn more about academic subjects through the productions they put on, she said. Members of the Players currently are working on their annual "Lenten Reflections," which is a Passion play Crowley wrote.

"I like just talking and doing the songs, because I like to sing. I’ve always liked acting," said All Saints second-grader Ashley Brown.

"It’s just mostly fun," said Regina George, a fifth-grader at All Saints. "You get to be with all your friends, and be who you want to be."