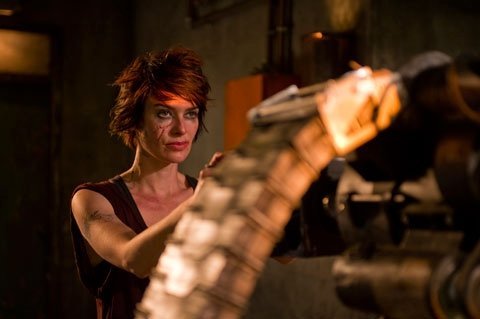 NEW YORK (CNS) — There’s no need to dread going to see "Dredd 3D" (Lionsgate), so long as you’re a teenager addicted to violent video games. For "Dredd" is just that: a gamer’s fantasy come to life, in gory, blood-splattering 3D that will leave many viewers running for the doors.

Director Pete Travis ("Vantage Point") has adapted the British graphic novel series "2000 A.D." in this good-vs.-evil story set in a post-apocalyptic future. It’s a grim place and not for the squeamish, as hardly a frame goes by without a head being blown off or a body being skinned alive.

America, we are told, is an irradiated wasteland, where people live in skyscraper ghettos in Mega City One, a crime-ridden metropolis that stretches from Boston to Washington. The only source of law and order are the "Judges," who roam the streets on way-cool motorcycles in search of delinquents. Justice is swift, as Judges act on the spot as judge, jury, and executioner. Talk about government efficiency!

One Judge stands taller than the rest: Judge Dredd (Karl Urban), a legendary figure both admired and feared throughout the city. You don’t mess with the helmeted Dredd as he bellows in a deep baritone, "I am the law!"

Dredd is assigned a rookie, Cassandra (Olivia Thirlby), and together they investigate the drug epidemic that is sweeping Mega City One. The drug is aptly called "Slo-Mo" for it slows down the passage of time, rendering the user euphoric (and much of the film in slow motion, too).

The drug cartel’s headquarters is the oddly named Peach Trees Block, a 200-story housing complex. In the penthouse lives Ma-Ma (Lena Headey), prostitute turned psychopath leader of the cartel. You don’t mess with Ma-Ma either, as she’s handy with a knife and will stop at nothing to protect her evil empire.

Needless to say, it all leads to a classic, albeit predictable, showdown as Dredd and Cassandra make their way to the top of the Block, with a whole lotta carnage along the way.

"Dredd" is an assault on the senses. It takes no prisoners with each killing more graphic and gory than the last, gobs of blood and bucketloads of body parts floating stylishly across the screen in slow-motion 3-D.